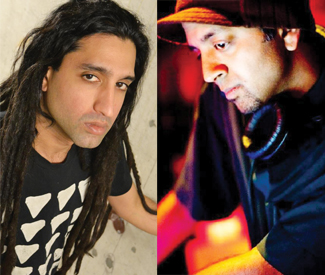 >>LISTEN TO AN EXCLUSIVE KUSH ARORA MIX (AND MORE) HERE

SUPER EGO Hurray, it is not 115 degrees here! I just got a skype from my heatwaved homegirl Googie Santorum in Canton, Ohio, and she said all her wigs had melted into Dynel helmets and that she lost two pairs of kitten heels in the asphalt puddle outside Heggy’s Nut Shop on West Tuskawaras Street. I thought we cured global warming 10 years ago when we sat through that Al Gore movie and quit using Aqua Net? Well, apparently not.

I felt a little guilty reveling in our temperate clime while the rest of America fried — but that all changed when I started instead feeling a little guilty for passing out on the Fourth with two lit sparklers in my hair and a crotchful of spilled PBR. Goddess bless America. And all her bald spots and blackout complications.

In club terms, however, summer’s really steaming up our tails. I especially felt the mercury rising when it was announced that our hometown heroes of “dread bass,” the Surya Dub DJ crew, would be returning to the scene, taking over the second dance floor of the bangin’ Non Stop Bhangra monthly party on Sat/14 (9pm-3am, $10–$15. Public Works, 161 Erie, SF. www.publicsf.com). Bassheads, get ready for a low pressure system no amount of my overheated metaphors can properly describe.

The mega-affair is being billed as “Indian-Caribbean summer tropical bass madness,” and you get mad amounts of hot tropicalia: a main room headlining slot from Portland’s DJ Anjuli and The Incredible Kid, founders of the longest-running bhangra party on the West Coast; guest spots for our main moombahton man, DJ Theory, and Matt Haze of wicked broken bass collective Slayers Club; bhangra dance lessons from the amazing Dholrhythms dance troupe; live drumming ….

And on top of it, Surya Dub’s ever-evolving, deep-global sound, finally back in the spotlight. SF’s musico-cultural cross-currents certainly haven’t flagged in the three years since the South Asian-flavored crew ruled the local bass scene with an irresistible mix of dub floor-droppers, future-bass bangers, ruff riddims, global breaks, and hip-hop bhangra. But when the crew members went on to various projects (including bringing Surya Dub to India and producing some great records), the scene lacked their singular fire.

“We never really went away,” Maneesh the Twister told me on a conference call with fellow Dubbers Kush Arora and Jimmy Love. “But it seemed like the music was changing in the clubs here. We wanted to evolve, to update the dread bass sound, in response to all the dubstep, electronic bass music, UK funky, and bashment that’s come to the fore.”

“We started feeling a wider variety of both New World and traditional sounds,” Kush told me. “African beats like kuduro — Buraka Som Sistema is great — to more post-dubstep tropical sounds. All of these rhythms that are talking to each other around the world. And of course we work in what’s been going on in bhangra as it develops.”

Jimmy, who also runs the Non Stop Bhangra party itself, was the catalyst for the “reunion.”

“We’re don’t just play traditional-sounding Bollywood or bhangra at the NSB parties,” he said. “I love dub reggae and Afrolicious-like funk, and our die-hard Indian crowd has loved when we play more tropical tracks. We always want to stretch the definition, and walking upstairs to Surya’s room will be a seamless experience of global sounds.

“It’s all about bringing communities together on the dance floor. And then heating everything up.”

Soigné dark synthpop Canadian duo Cosmetics travel musically from Moroder to Siouxsie, charmingly, icily, and will be joined by Portland’s Soft Metals and our own Breakdown Valentine — two more chamber synth duos whose tunes seem intimately crafted just for you — for a catchy Friday the 13th affair. Justin of the Soft Moon, Rachel of the Conversion, and Omar DJ.

The whole gay bear thing kinda lost my interest once many of the hot fat country lumberjacks got replaced by entitled circuity gymrats constantly checking their Scruff apps on the dance floor. YOU’RE NOT A BEAR — YOU’RE JUST MIDDLE-AGED, I cried. (Middle age is a new thing for us post-AIDS era gay men; we’re working it out.) But that was, what, 2010? Time to reappraise. I’ve been hitting up this too-cute pan-musical dance party at Lonestar the past two months, brimming with sexy-goofy young hairies on the hoof and a few zesty chubs, too. Bear Trek: the Next Generation looks pretty damn good.

The once-local (now Brooklynite) trio sanded off some of its esoteric angles in favor of wistful, Fairlight synth era-referencing pop on new album Diver, but it still retains those breezy percussive touches that made it one of the leaders of the nu-tropicalism underground dance movement a few years ago. With killer DJ and DMC champion Kid Fresh from Hong Kong at the always balmy nu-cumbia Tormenta Tropical monthly.