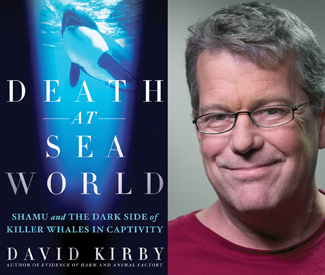 LIT “Death at SeaWorld.” The phrase implies a gruesome demise, combining the man vs. beast connotations of Siegfried and Roy’s last show with the amusement-park horrors of Wikipedia’s “incidents at Disneyland” page. Death isn’t supposed to pop up in environments carefully choreographed for family fun. But as David Kirby’s eye-opening Death at SeaWorld: Shamu and the Dark Side of Killer Whales in Captivity (St. Martin’s Press, 469 pp., $26.99) discovers, the marine-themed attraction has hosted its share of tragedies, and not just of the human variety.

Its most high-profile loss was Orlando employee Dawn Brancheau, killed in 2010 by a 12,000-pound orca named Tilikum. Though SeaWorld has long been a target of animal-rights groups, Brancheau’s death set in motion a rigorous Occupational Safety and Health Administration (OSHA) investigation into whether or not trainers should be allowed to keep performing the spectacular aquatic stunts that SeaWorld has long been famous for. (As of this writing, the case is still in legal-wrangling mode.)

Kirby, a journalist whose previous books include Evidence of Harm and Animal Factory, found the OSHA inquiry — and the fact that it had been met with strong SeaWorld resistance — instantly compelling. He soon understood there was much more to the story.

“I started out to write a book about corporate malfeasance and obstructing a federal investigation,” he remembers. “[Killer whale] captivity had not ever struck me as an issue. But I realized that even though a lot of people were screaming about how safe it was to be in the water during performances, the much larger question was: do these animals belong in captivity at all?”

As a kid in SoCal, Kirby says, he visited SeaWorld and went on whale-watching trips. But until he started writing Death at SeaWorld, “I didn’t know that killer whales are dolphins, that they don’t kill people in the wild, how highly intelligent they are, or that they are so attached to their families,” he says. “When Dawn Brancheau died, I remember feeling very bad for her and her family, but I don’t remember feeling bad for the whale.”

His research made him rethink his ambivalence toward not just Tilikum, but all killer whales in captivity. Very few “display industry representatives” were willing to speak on the record, but Kirby connected with several “anti-cap” figures — including the Humane Society’s Dr. Naomi Rose, a whale expert who was involved in the campaign to return Keiko, star of 1993’s Free Willy, to his native Iceland.

“When you write narrative nonfiction, you really do need one character who is going to carry the reader through the whole story,” Kirby says. “[Rose] was the best person to do that because she started studying these animals in 1985. She spent years doing field research, and [later became] involved in organizing against the industry, starting anti-captivity campaigns, and trying to protect these whales through federal law. She was also involved with the OSHA investigation and the media.”

In addition, “I was so lucky to have ex-trainers who came forward after Dawn died. [They had] come to the same conclusion through different channels [than Rose]: captivity is bad for the whales. I felt super-fortunate to have first-person accounts of whales in nature and whales in captivity,” Kirby says. “I really wanted to bring readers to two different worlds that most people have never been to: the far Northern reaches of Vancouver Island, where these whales live — and then, backstage in Orlando. I felt that juxtaposing them would really show why captivity is inappropriate. I wanted the readers to get to know the whales in the wild, and to appreciate their life in the wild, in order to understand why captivity for this particular species is so wrong.”

Though Brancheau’s death was the impetus for Death at SeaWorld, it is not the book’s sole focus. The “death” referred to in the title has multiple meanings.

“Two people [Brancheau, plus an after-hours trespasser in 1999] have died in SeaWorld pools,” Kirby says. “Two other people have died because of SeaWorld whales: in British Columbia before Tilikum was bought by SeaWorld, and in the Canary Islands by a whale owned by SeaWorld.”

But while human deaths grab headlines, whale deaths are far more common. According to Rose and other experts, orcas live far fewer years in captivity than they would in the wild.

“Death at SeaWorld also absolutely refers to all of the orcas who have died at SeaWorld, and continue to die at SeaWorld,” Kirby says. “To me, the whales are as important as any of the people in the book — Tilikum becomes a main character that you get to know. I used to tell people when I was writing the book, it’s like Jaws, only it’s non-fiction, more people die, and you actually care about the whale.”