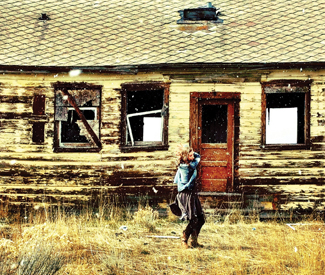 DANCE What a stellar idea to premiere a work called No Hero the weekend after Independence Day. There are no brass bands, flag waving-exercises, or fireworks in Foundry artistic director-choreographer Alex Ketley’s delightful and at times funny stage and video creation, which returns to Z Space August 1. Yet Hero is piece of pure Americana, a tender and amusing tribute to ordinary people and the role that dance may or may not play in their lives.

Tired of thinking of dance as something larger than life, Ketley set out on a month-long trek, camera in hand and lovely dancer Aline Wachsmuth in tow. They traipsed through dusty Western towns and hamlets from Death Valley to Oregon, talking with folks in RV parks and community halls, inside their homes, and outside some shacks. They met Shirley, who remembered the social dances of her youth; motorcyclist Ava and his dog Spirit, who are on the road trying to forget the death of Ava’s son; Dwight and Dale, who chuckled over the names of the dances they used to know; and widows who get together every afternoon to teach each other steps they learn from YouTube. Ketley and Wachsmuth also encountered the legendary Marta Beckett, who just recently stopped performing six days a week — at the age of 88 — in an old opera house whether anybody was there to watch or not.

And for all of them Wachsmuth danced. Often she looked shadowy on the video but always organic, stretching her limbs like tendrils, scooping space, and opening herself to forces surging from within. It was fascinating to see the reactions (or rather, lack thereof) of each audience: you couldn’t tell whether they were flabbergasted, indifferent, or bemused by this willowy creature in front of them. Ketley kept us guessing.

Back in the decidedly non-rural Bay Area, the two artists took the material and expanded on it for the stage, where Wachsmuth was joined by Sarah Dione Woods. What had been spatially tight but also intimate became expansive and multi-dimensional without losing its rich impulse-driven energy. The choreography often looked as if it had grown out of the screen. A demure waltz exploded into somersaults and exuberant leaps. Mirroring each other, the two women spread out but also intertwined as if trying to morph together. With her back to us, dancing alongside a sunset, Wachsmuth repeated the choreography facing us. But when onscreen a fierce storm kept her off balance, the stage couldn’t compete with that drama.

The video images (post-production by Austin Forbord) had been edited to create both a contextualization for the stage action but also developed an independent rhythm. Ballad and pop singers — ranging from Ben Howard to Patti Page — added their own voices to this poetic evocation of dance as part of the everyday.

THE FOUNDRY AND BOBBY JENE SMITH