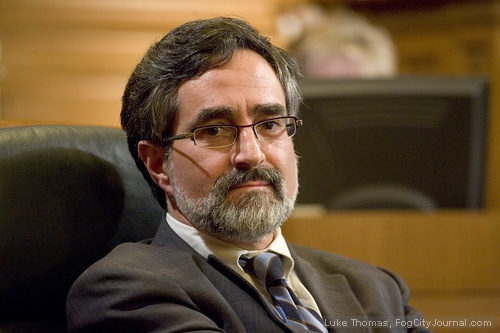 San Francisco Democratic Party Chair Aaron Peskin has confirmed his role in extending a city job offer from Mayor Ed Lee to Sheriff Ross Mirkarimi if Mirkarimi had been willing to resign in March, bolstering allegations that Lee may have committed perjury when testifying under oath before the Ethics Commission on Friday.

But even as more media outlets report the possible perjury (a story we broke first here), which is further complicating the already complicated official misconduct proceedings that Lee brought against Mirkarimi, the Mayor’s Office and key Lee allies have refused to comment on the perjury allegations or the strange circumstances surrounding the alleged bomb threat that temporarily got Lee off the hot seat.

As we reported in this week’s Guardian, Building Inspection Commissioner Debra Walker said Lee was lying when he said that he hadn’t spoken with any members of the Board of Supervisors before charging Mirkarimi with official misconduct. Walker said Sup. Christina Olague told her she had spoken with Lee about the matter, which Olague now denies.

Lee also responded “absolutely not” when asked by Mirkarimi attorney Shephard Kopp whether he authorized Peskin or development consultant Walter Wong, a close Lee ally, “to convey to Sheriff Mirkarimi if he would stop down, you’d get him another job.”

At press time for this week’s article, Peskin was backpacking in the Sierras and couldn’t be reached, but he has now confirmed to the Guardian that he met with Wong at 11:30am on March 19 – just hours before Lee met with Mirkarimi to say he would be removed from office unless he resigned – at Cafe Trieste.

In that meeting, Peskin said Wong asked him to convey to Mirkarimi an offer from the mayor of a job with the San Francisco Public Utilities Commission or the Airport Commission if Mirkarimi would voluntarily resign. Asked whether Wong indicated that he had discussed the offer with the mayor, Peskin told us, “He certainly left me with that impression.”

Mirkarimi refused to accept the offer, insisting on fighting to keep his job, which was one factor in Peskin’s subsequent public statement calling for Mirkarimi to resign. “There were a lot of things that factored into that,” Peskin said of his call for Mirkarimi to step down, although he wouldn’t discuss other factors on the record.

Efforts by both the Guardian and the Examiner to reach Wong have been unsuccessful, and messages to the Mayor’s Press Office on this and related issues also haven’t been answered. But just as Walker has offered to do, Peskin said he’s willing to testify under oath if asked.

“I am prepared, if subpoenaed, to tell the truth, the whole truth, and nothing but the truth,” Peskin told us.

Lee hasn’t had any public events or made any public comments on the matter since the scandal broke on Friday. The other unanswered mystery is why Lee was whisked from the hearing room just 15 minutes into his testimony, shortly after making the statements that Walker alleges amounted to perjury.

As we reported, neither the SFPD nor the Sheriff’s Department ordered the room evacuated, meaning that decision must have been made by someone within the Mayor’s Office. Press Secretary Christine Falvey’s last statement to the Guardian, on July 2, said, “Again, the mayor’s office did not recess the meeting. I still have to refer you to the Police Department which maintains Mayor Lee’s security or the Ethics Commission about the decision to recess the meeting for (I believe) about 90 minutes.”

Yet neither body seems to know who made the call, and follow-up questions asking the Mayor’s Office to disclose any information they have about that decision have gone unanswered. District Attorney George Gascon — whose office would need to pursue the perjury allegations considering the city’s official misconduct rules don’t apply to the mayor — also didn’t return our call asking generally how allegations of this fashion should be handled.

The official misconduct proceeding continue in front of the Ethics Commission on July 18 and 19 when Mirkarimi’s wife, Eliana Lopez, is scheduled to testify. But that has also been complicated by the Mayor’s Office’s refusal to authorize payment for a plane ticket for Lopez to return from her native Venezuela to testify. Mirkarimi and his legal team say they can’t afford to pay for that plane ticket after Lee suspended Mirkarimi without pay.