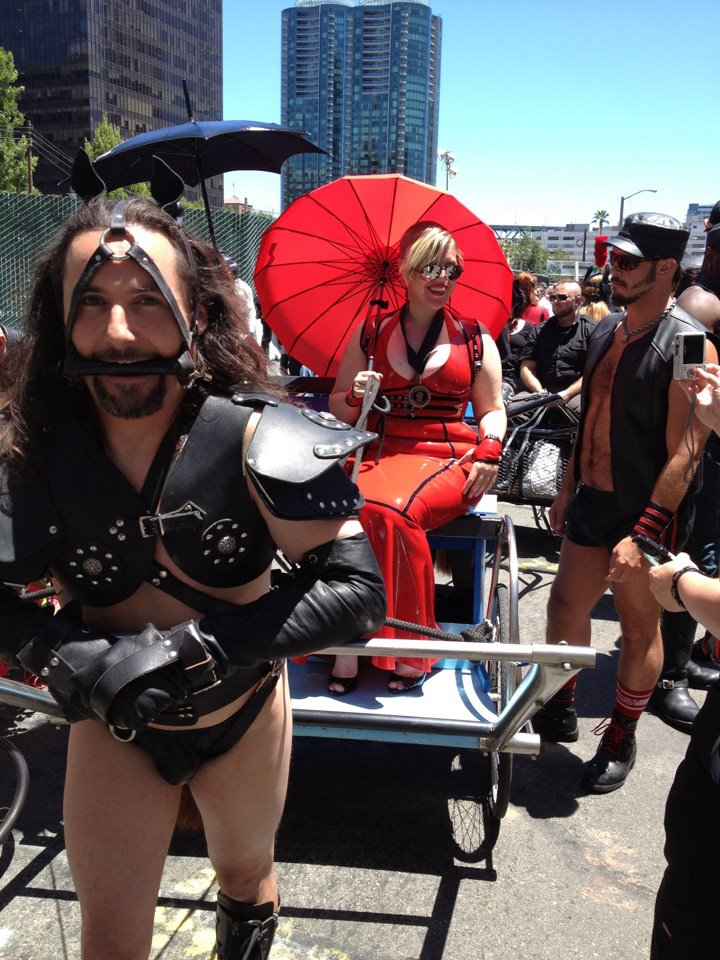 Typically, the afterparty is the thing for Sunday Pride fashion. But if you weren’t at the big parade this year, you might have missed out on one of the more striking ensembles of the weekend. Leather co-marshal Leland Carina sent us photos of her eye-popping latex gown — not to mention what it was like to wear the thing on one of the more hectic days in San Francisco.

Carina — one-time president of SF girls of Leather and correspondent for Leatherati, among about a thousand other roles she plays in the kink community — was sporting a floor-length red-and-black number by Lust Designs. Lust is a San Francisco company run by local kinksters Penny and Blaine McClish that does ready-to-wear and custom design pieces, which are apparently surprisingly wearable (except for the hobbling effect, but that has more to do with it being a bondage garment.) Says Carina:

Wearing latex is, for me, a fetish in and of itself. It feels nothing like more common fabrics, but rather like a sensation-enhancing apparatus that completely encases my entire body. For optimal presentation, it requires that I am rubbed down multiple times a day with silicone lube. This enhances not only the shine, but also the color. When people come into contact with the dress, it amplifies their touch for my skin. This particular dress also included an element of bondage, as I was only able to wiggle forward, taking very small steps throughout the entire afternoon.

Highlights of wearing it among so many people (beyond the staggering amount of flattering comments) include the variety of questions I was asked. Contrary to what many think, I was actually quite comfortable in the sun. The parasol helped for sure, but I also find latex to be a lot less hot than leather, for instance. Every time a breeze went by my entire body was chilled.

Did she mention she was being pulled along the route by human ponies? She was. Check out Carina’s back story in last week’s Guardian interview with her and co-marshal and leather community lynchpin Race Bannon. And if you just can’t get enough latex fashion, you could do a lot worse than check out Kelly Lovemonster’s talk with Mr. S’s Seven Mitchell, also from last week.