Home The Grannies flaunt their finest digs for a good cause 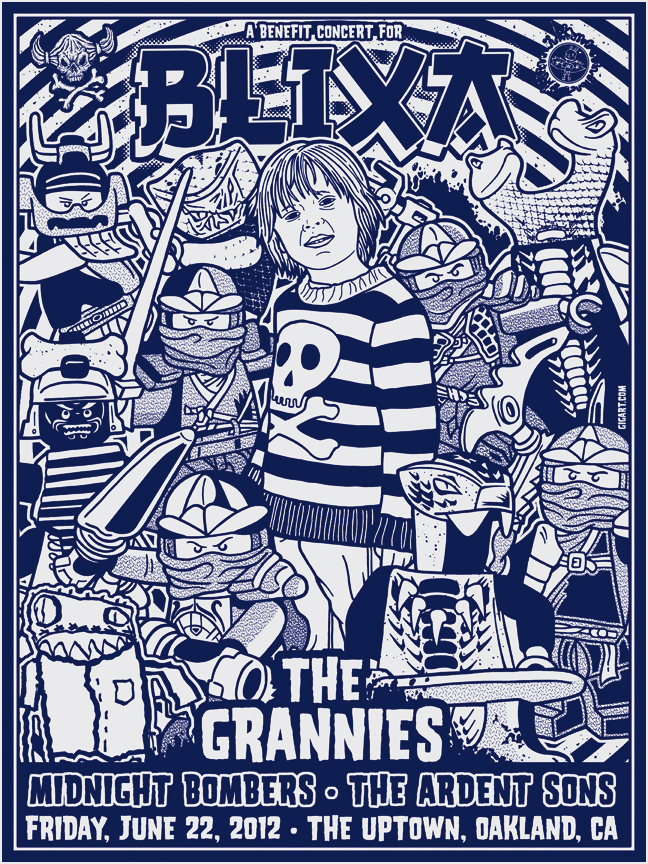 The Grannies know how to have fun. After over a decade of raucous good times, including two European tours and years of stage antics, the six remaining members of the local punk band are back, playing in Oakland Fri/22 with Midnight Bombers and the Ardent Sons.

Yet this show extends past the chaotic atmospheres of a typical Grannies show. This show is a benefit for the son of founder and lead guitarist Sluggo Cawley.

Cawley’s four-year-old son Blixa was recently diagnosed with acute leukemia, and he’ll be undergoing treatment for the next four years. The Uptown is accepting donations above the door cover.

“My son is doing well,” says Cawley. “The initial shock is the most horrible. We went into the hospital for a regular checkup, and hearing that news was way out of our scope of reality. But there has been an outpouring of love and money; people offering help in any way that they can.”

Adding, “I used to be kind of a ‘people suck’ kind of person, but I have been proven wrong in the last couple months!”

He says total strangers having been sending in assistance. A punk band in Germany sent over a thousand Euros.

“We do have a lot of expenses, it will add up. I am not super religious, but if people offer us prayers and I appreciate it, every kind of good vibe or feeling helps.”

Usually, Cawley can turn to his bandmates for those good vibes — the Grannies is made up of Granimal, Granzig, Stagger G, Bjorn Toulouse and Drool Cup, who all rock out in full dresses and wigs, classic if outdated grandma-ware.

The group’s online persona is just as amusing. The San Francisco punk band, founded in 1999, notes in various online sites that its interests include knitting, reclining, drinking, burning, rocking, and sleeping. And the musicians’ cynical and ironic sense of humor comes across in songs such as “Denture Breath” and similarly silly album names like Taste the Walker.

Those musicians are excited to play the benefit tonight at the Uptown.

“The Uptown is a really awesome club,” Cawley says. “[It was] the first venue to offer a benefit show, and for a Friday night, too!”

There’ll be an auction at the show as well, including the poster by well-known artist Gregg Gordon, who has worked on the graphics for Live 105 and its BFD show.

“After original horrible diagnosis, we feel really, really lucky that people have come to help,” Cawley says. “He is a beautiful blonde haired, blue-eyed kid. Right now he looks like a little old man, he has lost all his hair, but it doesn’t bother him. In 10 years it will all be behind him, he will be a normal teenager by then. Any adult in his situation would be worrying and complaining, I would be.”

“He is pretty awesome, I mean even when he had a bad fever for four days, he would still give you a smile.”