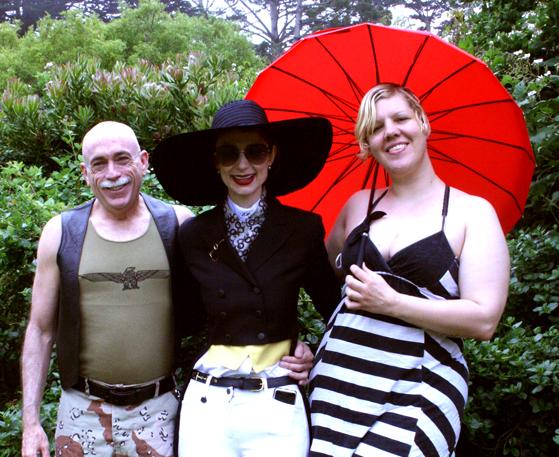 It was almost Pride Week, I’ve had two leather luminaries hanging out at kink coffeeshop Wicked Grounds – it just seemed like an opportune time to start waxing philosophical about the possibility of a kink renaissance in San Francisco.

“There just seems to be this general coming-out,” said Leland Carina, who as a member of the SF girls of Leather has done her part to increase the inclusiveness and malleability of her kink community. She likened this expansion to the capital-R Renaissance, which happened after the threat of bubonic plague had been mitigated. Likewise, she said, the kink community in San Francisco is finally hitting a point where the fear of AIDS no longer rules people’s sexual encounters.

Race Bannon, Carina’s co-leather marshall in this Sunday’s Pride parade, hadn’t thought of it that way – but Carina’s theory resonated with him. “We’ve figured out how to deal with [AIDS], and we’ve moved past it. I call what’s happening a kinky renaissance.”

The two of them should know. Bannon and Carina are connectors in the leather community. In our chat at Wicked Grounds, the two surmise that they were chosen to be Pride’s leather marshalls based on their approachability and connection with their playmates and community members. They are both very good at creating community on the Internet through social media — but are both rather accomplished perverts off the web as well.

Brief descriptions, for those of us that thrive on bullet points:

They are the Miss Universes of the leather community, if that’s not too distasteful to say. “It’s mainly a wave and smile sort of thing,” says Carina – who will be wearing a red latex dress for her pageant moment made by an ex “roller derby sister” who runs Lust Designs. But be that as it may, Bannon and Carina are determined to make what they can of it. The two have pledged to do what they can to raise attendance numbers in their contingent so that the Pride hoards can see for themselves the growing scope of the leather community. They’ll be towed in the parade by human ponies, expertly trained by human pony mistress Liliane Hunt.

In the spirit of a true pageant host (I was channeling Sinbad in 2000, which I chose because Montell Jordan was the musical guest that year. My second pick would have been Jerry Springer in 2008 because Lady Gaga was his musical guest. You really need to read this list), I end our meeting with a truly corny question. What is the biggest challenge facing the leather community today?

“Right now we have a very kumbaya status,” Bannon smiles, as Carina grimaces a little from across the table (surely, a girl of Leather has a bit different view on schisms in the community than an established older gentleman). Bannon also said that finding space for playtime is always a challenge in a city as dense and expensive as San Francisco.