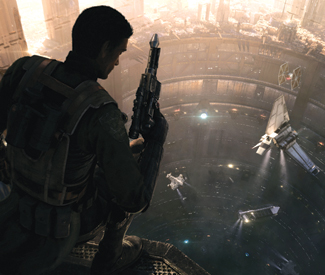 GAMER There was a moment when it seemed this year’s Electronic Entertainment Expo (better known as E3) would be the most exciting since way back in 2006, the year Wii and PlayStation 3 premiered. This January, rumors swirled around Sony and Microsoft, that they were developing next generation consoles, and perhaps looking to premiere them alongside Nintendo’s big Wii U reveal.

But Microsoft’s decision instead was to coast on their current success as market leader, and Sony chose to concentrate on setting themselves apart in an increasingly multi-platform marketplace by focusing on peripherals and exclusives. So, at least one more year for this generation of gaming, making E3 2012 pretty interchangeable with 2011.

Nintendo’s presentation played it safe with first-party games that were either already known (Pikmin 3) or practically indistinguishable from past installments (New Super Mario Bros. 2), and left innovation for new Wii U software to third party developers. Playing nice with outside development teams will go a long way towards winning back the “hardcore” crowd Nintendo desperately craves but the dearth of exciting games evoked too-fresh memories of last year’s disastrous 3DS launch.

Speaking on the Wii U at an investor presentation prior to E3, Nintendo president Satoru Iwata stated “There is always a limit to our internal resources … if I said that an overwhelmingly rich software lineup would be prepared from day one, it would be too much of a promise to make.” Attendees at Nintendo’s conference would have been wise to heed that warning, as an initially excited crowd grew more restless with each announcement that wasn’t a hi-definition Zelda or Metroid game.

On the other side of the coin, Microsoft opened with a guaranteed bread-winner for the Xbox and their only exclusive blockbuster releasing this year, Halo 4. Coupled with the annual release of Call of Duty, the Xbox is in a safe spot, and Microsoft was smart to concentrate the rest of their show on apps and an application they’re calling SmartGlass, even if doing so created some disappointment in the crowd. An experiment in tablet crosstalk, SmartGlass is just one example of the “second-screen” gameplay all three publishers appear keen on for 2013.

Last of the “big three” publishers, Sony attempted to entice consumers into supporting the low-selling PlayStation Move and the new PSVita handheld, but their exclusive titles remained the most compelling reason to own a PlayStation. A new project from Quantic Dream, Beyond: Two Souls improves on Heavy Rain‘s cinematic storytelling, and Naughty Dog’s post-apocalyptic survival piece The Last of Us wowed audiences with gruesome one-on-one combat. Sony also featured the Expo’s biggest failure: way too much time devoted to a buggy and simplistic augmented reality book, Wonderbook, based on the Harry Potter franchise.

Concentrating on games over peripherals, Ubisoft had arguably this year’s best showing. New action/stealth IP WATCH_DOGS, about a hacker who can control the power of a city’s technology, had many declaring it E3’s biggest surprise, and Ubisoft also delivered strong demos for Splinter Cell: Blacklist, Assassin’s Creed III, Far Cry 3, and Rayman Legends, the last of which harnessed the possibilities of the Wii U in ways even Nintendo couldn’t match.

On the E3 show floor, the Tomb Raider series’ reboot is emotionally engrossing and includes a more robust upgrade system than the game it most closely resembles, Uncharted. Where Uncharted is known for strong story and characters, Tomb Raider competes with a terrifying sense of helplessness and mature storytelling. Making its debut at E3, Star Wars 1313 also made a lot of promises about being first to set a “mature” game in the Star Wars universe. It’ll be interesting to see if LucasArts uses that freedom as a tableau to create a truly interesting story, or if it becomes a bar to hit in terms of language and violence. Either way, 1313 features some of the most realistic motion capture I’ve ever seen, and lighting and animation that rivals entries in the film series. If there was a constant among the big E3 games, it was the year 2013. Publishers are tired of getting beat up each fall by Call of Duty‘s annual release and have relocated to next spring. Most titles demoed at E3 have been slotted for 2013’s first quarter, which currently looks as stuffed with games as November usually does. It’ll be interesting to see who stands their ground and who makes one last push to the barren summer months. If 2013 looks to be an exciting time to be a gamer, in 2012 it remains business as usual.