Home Occupy Caravan takes off to the National Gathering 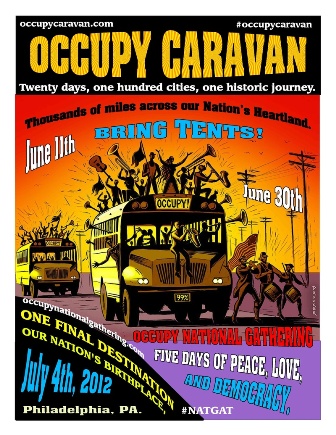 Jan. 17, we proposed Occupy Nation, an idea that those energized and organized by Occupy come together on July 4, 2012 for a national gathering to get some planning done. We also proposed that the journey across the US be a part of the action, and that people get together in vans for a freedom-ride inspired experience. Well, it’s happening- although, of course, it wasn’t all our idea. But they are using our cover art!

The Occupy Caravan is an ever-expanding crew of people getting together for a two-week journey across the US. There are two starting points, Los Angeles and San Francisco- and the San Francisco caravan is taking off June 11. The caravans will stop at Occupy sites along the way for protests, education and entertainment, before arriving in Philadelphia for the June 30 Occupy National Gathering.

The poster declares, “bring tents!” But according to an Occupy Caravan organizer known as Buddy, sleeping arrangements that won’t risk police meddling are planned at every stop.

“We have a bunch of secure and fun locations- there’s a slumber party at one, a march and then staying at a church at another, a supporter’s camp ground where we can park the RVs,” said Buddy.

“We’re not risking people getting arrested,” he said. “Everything is legal and nonviolent.”

In theory, anyone who wants to can show up, on foot or with a vehicle, and join the caravan. But if you want to secure a spot, according to Buddy, it’s best to sign up online beforehand.

“We’re getting 30 to 50 calls and emails a day about rides,” Buddy told me of the last chaotic week before the trip launches.

The National Gathering isn’t the only nationwide Occupy plan for this summer. It isn’t the only one in Philadelphia either. Or for the July 4 weekend. There’s also the 99 Percent Declaration, billed as a “Continental Congress 2.0”

It looks like these big get-togethers are part of the form Occupy will take this summer. What with a big and chaotic May Day, an even more tumultuous anti-Nato convergence in Chicago, and continuing home defenses, occupations of public spaces, and innumerable local actions across the country, the Occupy movement is in a very different state than it was in the winter when the Gathering and the Caravan were in their beginning planning stages.

“The movement has grown,” Buddy told me. “It’s less than a year old. It was an infant early on, and grew very quickly, but its getting stronger. We’re going back to the simply core message of economic equality and justice.”

After the National Gathering, the caravan will join the Occupy Guitarmy for its “99 Mile March” to New York. The Guitarmy is a travelling group of musicians that bills itself as “the world’s first open source band,” best known for its march on May 1 in New York City, led by Tom Morello of Rage Against the Machine.

As we said in the Occupy America proposal: “The important thing is to let this genie out of the bottle, to move Occupy into the next level of politics, to use a convention, rally, and national event to reassert the power of the people to control our political and economic institutions — and to change or abolish them as we see fit.” One thing is clear: Occupy hasn’t given up yet.