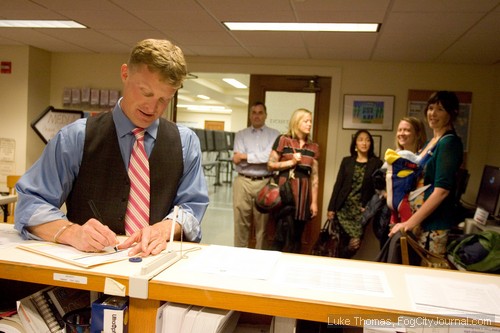 Progressive activist Quintin Mecke jumped into the District 5 supervisorial race today, echoing gentrification concerns raised this week by the Guardian and The New York Times and promising to be an independent representative of one of the city’s most progressive districts, a subtle dig at Sup. Christina Olague’s appointment by Mayor Ed Lee.

“The City is at an economic crossroads. As a 15 year resident of District 5, I cannot sit idly by while our City’s policies force out our residents and small businesses, recklessly pursuing profits for big business at whatever cost,” he began a letter to supporters announcing his candidacy, going on to cite the NYT article on the new tech boom that I wrote about earlier this week.

“What we do next will define the future of San Francisco; the city is always changing but what is important is how we choose to manage the change. One path leads to exponential rent increases, national corporate chain store proliferation, and conversion of rent-controlled housing. The other path leads to controlled and equitable growth, where the fruits of economic development are shared to promote and preserve what is great about this City and our district,” Mecke wrote.

Mecke came in second to Gavin Newsom in the 2007 mayor’s race and then served as the press secretary to Assembly member Tom Ammiano before leaving that post last week to run for office. Mecke joins Julian Davis and John Rizzo in challenging Olague from her left, while London Breed and Thea Selby are the leading moderates in a race that has 10 candidates so far, the largest field in the fall races.

Although he never mentioned Olague by name, Mecke closed his message by repeatedly noting his integrity and independence, a theme that is likely to be a strong one in this race as Olague balances her progressive history and her alliance with the fiscally conservative mayor who appointed her.

“Politics is nothing without principles; and it’s time now to put my own principles into action in this race,” Mecke wrote. “District 5 needs a strong, independent Supervisor. I am entering this race to fight for the values that I believe in and to fight to preserve what is great about District 5 and the city. I have brought principled independence to every issue I’ve worked on and that’s what I’ll continue to bring to City Hall.”

In an interview with the Guardian, Mecke said he sees the campaign as a “five-month organizing project” to reach both regular voters and residents of the district who haven’t been politically engaged, including those in the tech sector. He’d like to see the perspective of workers represented in discussions about technology, not simply the narrow view of venture capitalist Ron Conway that Mayor Lee has been relying on.