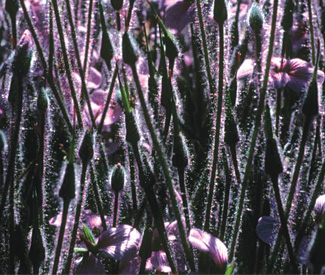 FILM It’s commonly said of Nathaniel Dorsky’s films that they are beautiful beyond words. Which is true as far as it goes, but then the same could be said of many poems and they are words. What’s clear is that Dorsky is absorbed with a classical fulfillment of form, and as such his films do better with poetics than interpretation (he has himself supplied a fine entry point with his slim volume Devotional Cinema). Poetics in this context means respecting the mystery and proceeding gingerly with gesture, metaphor, and detail. No one ever says of a Dorsky film, “I liked it the more I thought about it.” Conversely, watching a second or third time one marvels to find the beauty springing to life with the same force, subtler and lovelier now for this trick of renewal. No one ever says of a sunset, “I’ve seen this one before.”

A three-part retrospective at the Pacific Film Archive beginning June 10 retraces the last decade of Dorsky’s work. The Return (2011) and August and After (2012) receive local premieres this weekend, accompanied by the delicate Pastourelle (2010). June 17 brings his “Quartet,” to my mind a signal achievement of the young century. The series concludes June 24 with three earlier films confirming Dorsky’s mastery of an open (sometimes called polyvalent) form of montage: Song and Solitude (2006), Threnody (2004), and The Visitation (2002). How fitting that these films should be spaced out over consecutive days of rest! They will be shown on 16mm because that is what they are (last I checked the museums still show the Old Masters in paint).

It’s our good fortune to share a city with Dorsky: opportunities to see the films with him as a guide come a little more frequently, and the phenomena that supply his visual repertoire are that much more familiar. Here are the blossoms, the Chinatown lanterns, the drifting Muni trains, the ocean skies, and the seasons as we only dare to see them in deepest reverie.

Dorsky began making movies under the influence of people like Stan Brakhage and Gregory Markopoulos, filmmakers who strove for an intrinsic cinematic language (while the auteurists chiseled out an essential cinema, they sought cinema’s essence). After relocating to San Francisco in 1971, he reemerged with Hours for Jerome (1980-1982), a dense exercise in spiritual autobiography culled from pastoral years in New Jersey. The films began arriving with greater regularity after Triste (1998) and continue apace even after the desertion of his beloved Kodachrome.

The silence of Dorsky’s films is lush, providing intoxicating accompaniment to the slowed projection of 18 frames per second which dips the photographic action just out of the flow of representation. The crescendos that surge past the finish of his films invariably leave me surprised that I haven’t been listening to music, as the black of the theater seems clarified in the same way silence is after an expressive composition. Pushing the analogy further, the relationship between movement and stillness in his films is akin to that of sound and rest in music, the two leaved together as intonation. We really need a new word to describe the juddering movement of branches and buds that punctuate Dorsky’s films. “Quiver” is close, but it doesn’t capture the spring in the frame, like dancers on a stage.

A couple of months ago, Dorsky showed something called Kodachrome Dailies from the Time of Song and Solitude (Reel 1) at Lincoln Center: Song and Solitude-era footage in the chronological order in which it was shot. The material had a completely distinct character viewed this way. Dorsky talked of it as a journal. The loose form made it easier to relate to his eye being grasped by something in the world, and yet one missed the justice of the cuts.

If pressed for a defining quality of these films, I would say rightness —each shot developing to its fullness, tuned to what comes before and after. The fact that this formal refinement is itself the focus of the films creates a suspension of time which, after all, is a basic condition of paradise. Certainly the films are colored by experience, as August and After for instance is clearly marked by grief, yet this is never what they are “about.” Trust is placed in the self-expression of the film stock — its luster and dusk.

Dorsky’s films will reintroduce you to what branches make of the sky and how the grass gladdens when the sun reappears from its shade. I think this is what people are talking about when they say the films remind them of childhood. “A child said What is the grass? fetching it to me with full/hands;/How could I answer the child? I do not know what it is any/more than he./I guess it must the flag of my disposition, out of hopeful/green stuff woven.” We could choose many lines of verse to say the same, but Whitman’s will do. There is something mystical in Dorsky’s slightly ajar illuminations of worldly objects and features. And yet so too is there something altogether sensible and almost courtly in their formal arrangements. The shots of dogs make us chuckle because we’re in a position to recognize our own recognition, all too human.

On first viewing The Return struck me as a deeply melancholy work, its darkly reflecting surfaces and doublings bearing the impression of lost sleep. August and After, on the other hand, is more immediate in its effect and a superior example of how Dorsky’s style can serve distinct emotional structures (threnody here). Tender impressions taken near the end of George Kuchar’s life, the filmmaker surrounded by family and friends, are framed in the light of long afternoons. Everything that follows is touched by these pictures of intimacy: two workers sliding down a skyscraper, a distant glass door sweeping a ray of light across a café, agitated steps into bramble. A rhythmic montage focuses on packages and fruits carried down the street, the actual things transfigured into pure color. When the film’s ship finally sails, it does so with such grace as to say love without saying.