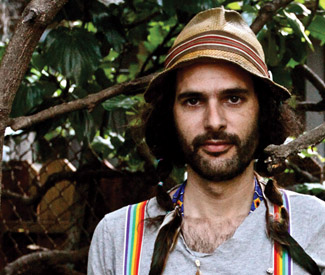 MUSIC After touring on 2009’s Words of the Knife with his band Os Beaches, Mark Matos’ world fell crashing from the cosmos. Internal struggles compelled him to fire his producer and his guitarist; Os Beaches’ practice space that doubled as a crash pad burned down (relegating the fresh-off-the-road group back to van sleeping); and Matos began to develop a destructive relationship with drugs.

When I meet up with him over an extremely tall glass of weizen beer at German restaurant Suppenküche, Matos — an eloquent, bearded 30-something who comes off as much like a shaman as the front person of a psychedelic rock collective — explains how he somewhat-recently hit rock bottom; and how psychedelics enabled him to climb out of a debilitating death hole and build a mountain on top of it.

“I was up all night on cocaine. I hate cocaine. I felt it all slipping away. And I was like, ‘I’m going to take the heroic dose’ — five grams of mushrooms,” Matos recalls. “It’s what the shamans of South America say is the proper dose. It’s not fun.”

Matos says after he emerged from his heroic experience, he felt completely reborn. “I didn’t want to do coke. I didn’t care about being famous, and I really, really felt high. I was so high that people thought I was losing it.”

He says his consumption of the heroic dose, coupled with a series of vision quests, spawned the creation of his enlightened self — Trans Van Santos — and drew him toward the concept of communal musicianship.

The Trans Van Santos identity came to Matos during a vision quest in the desert. He remembers big hands lifting him onto a pyramid, and voices beckoning him to embrace his spirit name, Trans Van Santos.

“Santos is my grandmother’s maiden name, and in our [Portuguese] tradition we often take the matriarch’s name. When I think ‘Santos,’ it reminds me to honor the feminine.”

Coyote and the Crosser, Mark Matos & Os Beaches’ recent release, tells the story of Matos’ transformation into Trans Van Santos and his quest for “the ball of light” — a metaphor for illumination and enlightenment. The band will debut the Coyote and the Crosser live show this week at the Rickshaw Stop.

“This show will be a rock’n’roll extravaganza: loud, psychedelic, and very electric,” Matos says. “The album is a malleable rock opera, so it’s a rock opera in a sense that there’s a narrative structure — a group of [six songs] — but there are other [songs] too. There’s a mythological universe coming across, so certain songs of mine fit into that world.”

“I think having intention in the visual aspect of [Coyote and the Crosser] will bring people to the point where we can have a shared experience,” Matos anticipates.

Matos’ cosmic alter-ego Trans Van Santos will perform at Starry Plough the following night, which should be a calmer, quieter ceremony. Trans, along with his Trans Band, will explore “Americalia”: a synthesis of American folk and Brazilian Tropicalia.

For his Trans Van Santos other self and Trans Band, Matos says he “kept the direction to a minimum, focusing on the spiritual approach to the material. I want to hear the choices these folks make, to feel the spirit of discovery between us.”

Matos’ mystical transformation has compelled him to share his “acid gospel” with the community. “What I am trying to do with my little corner of rock’n’roll is to treat it as a new psychedelic ceremony,” Matos explains. “That and throw a birthday party for the whole galaxy!”

With the Bottlecap Boys, The Know Nothings