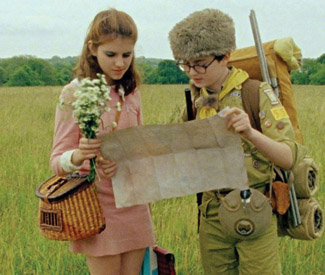 FILM It’s hard to make any grand pronouncements about Wes Anderson’s Moonrise Kingdom. Does the Boy King of Quirk’s new film mark a live-action return to form after 2007’s disappointingly wan Darjeeling Limited? More or less. Does it tick all the Andersonian style and content boxes? Indubitably.

In the most obvious deviation Anderson has taken with Moonrise, aside from a new font for the title sequence (Futura, we hardly knew ye), he gives us his first period piece. The tale is set in 1965, when New Penzance Island (entirely fictional, but ostensibly off the New England coast) is populated by children who would rather listen to educational records about British composer Benjamin Britten on their portable turntables than the latest Stones album — ironically, this is perhaps Anderson’s only film not to feature any ’60s British Invasion pop. (There is, however, plenty of Hank Williams on the soundtrack to lend some low-fi kitsch.)

After a chance encounter at a church play (Noye’s Fludde, Britten’s operatic version of Noah and the ark), pre-teen Khaki Scout Sam (newcomer Jared Gilman) instantly falls for the raven-suited, sable-haired Suzy Bishop (Kara Hayward, ditto). It’s not hard to understand why — Hayward’s sad doe eyes and petulant mouth bring to mind a mini-version of the prototypical Godard femme fatale; she’s Anna Karina in a training bra. The two become pen pals, and quickly bond over the shared misery of being misunderstood by both authority figures and fellow kids.

The bespectacled, corncob pipe–smoking Sam is an orphan, ostracized by his foster parents and scout troop (much to the dismay of its straight-arrow leader Edward Norton). Suzy despises her clueless attorney parents, played with gusto by Bill Murray and Frances McDormand in some of the film’s funniest and best scenes (they both call each other “counselor” when arguing). Suzy’s mother has cuckolded her dad by having an affair with island cop Bruce Willis (in full middle-age-man mode, looking a bit like a decrepit Tintin), who takes an interest in the troubled Sam.

But that interest can’t stop the two kids from running off together into the woods to play Blue Lagoon. It’s hard to blame them. “Does it concern you that your daughter’s just run away from home?” Mrs. Bishop asks her husband. “That’s a loaded question,” he responds after a significant beat. The whole thing begins to resemble a kind of tween version of Godard’s 1965 lovers-on the-lam fantasia Pierrot le Fou. (Suzy even stabs a boy with scissors in a pivotal scene.) But like most of Anderson’s stuff, it has a gauzy sentimentality more akin to Truffaut than Godard.

Imagine if the sequence in 2001’s The Royal Tenenbaums where Margot and Richie run away to the Museum of Natural History had been given the feature treatment. It’s a simple yet inspired idea. And it becomes a charming little tale of the perils of growing up and selling out the fantasy. It’s also very funny — any movie that features Tilda Swinton, bedecked in navy cape and jaunty hat, as a soulless bureaucrat who refers to herself exclusively as “Social Services,” can’t be all wrong.

Still, something is missing. Much of Anderson’s wit and charm stems from a postmodern out-of-time quality, a sense of existence just this side of real. But that ironic detachment seems to be methodically sapping his ability to make a different kind of love connection: the one between his onscreen romance and his audience’s collective heart. Yes, it’s beautiful, exotic, lovely, and romantic (in both the lower-case and upper-case “R” senses). But it doesn’t feel remotely risky. And so it doesn’t seem real. In a word, it’s simply too damn tame.

Even when Hurricane Maybelline descends on the island, there is never any sense of mortal danger, emotional or otherwise. At one point Sam gets cold-cocked by a bolt of lightning, quickly rises as his head still smokes, and announces, “I’m okay.” I don’t think anyone in the audience was surprised. Even the possibility of the Great Flood itself washing everything away seems a bit of a skin game.

As his characters do, Wes likes his toys. I like his toys as well. But I wonder if it might be time for him, like Sam and Suzy, to grow up a little and put away some childish things. He can feel free to hold onto the portable turntable, though — especially if he puts on some old Stones records.