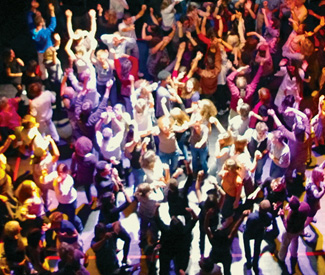 THEATER You could call them a pair of crazy kids with a dream. But two years after Playwrights Foundation executive director Amy Mueller was introduced to Ivan Bertoux, Deputy Cultural Attaché of the French Consulate by Rob Melrose, artistic director of Cutting Ball Theater, their vision of cross-pollinating their respective communities with newly translated theater pieces from either side of the Atlantic has become a reality.

Originating from a desire shared by Bertoux and co-attaché Denis Bisson to expose American theater-goers to hitherto untranslated works by young, contemporary French playwrights, a unique festival called “Des Voix … Found in Translation” has emerged. It involves an elaborate synthesis of dozens of playwrights, readers, translators, and theater-makers whose primary common ground has been the desire to forge something new.

For Bertoux, the opportunity to help facilitate the presentation of French drama to the American stage is more than just his job description — it’s a project that speaks deeply to his background. A former translator of British drama to French at the Maison Antoine Vitez (a center for theater translation in Paris), Bertoux’s personal passion for theater has found new expression with Des Voix. And Mueller, a veteran and mainstay of the new-play development scene in San Francisco, is excited by the prospect of helping to introduce fresh theatrical voices from abroad, voices all too absent from the American stage.

“Americans are still very interested in their own stories,” she points out. “We want to immerse ourselves in stories about ourselves.” But taking a page from New York’s Lark Play Development Center’s Playwright Exchange Program, she and Bertoux began reaching out to playwrights and translators, French and American both, in order to facilitate an even exchange. The resultant three-pronged festival includes a first-ever San Francisco version of a “Bal Littéraire,” a weekend of staged readings of the newly translated French plays at Z Space — and a similar staging scheduled for Paris in 2013, for the three American playwrights.

The selected Americans — Rajiv Joseph, Marcus Gardley, and Liz Duffy Adams — are all familiar names to Bay Area audiences, and all share a connection to the Playwrights Foundation in their past artistic development. But it’s the names Samuel Gallet, Marion Aubert, and Nathalie Fillion that the Des Voix festival founders hope to propel into the collective theatrical consciousness of the English-speaking world. What the three French playwrights have in common, besides having been nominated for consideration by the Maison Antoine Vitez, is membership in La Coopérative d’Ecriture, a loose confederation of French playwrights whose ranks also include Fabrice Melquiot (who was introduced to the American stage by SF’s foolsFURY).

Creators of the Bal Littéraire, a “pop-up” style of theater performance that uses the participating playwrights’ favorite songs as a jumping off point and culminates in an off-the-cuff, one-night-only experiment in collaborative playmaking (the San Francisco version of which will debut Fri/25), one of La Coopérative d’Ecriture’s goals is dissolving barriers between theater-makers and their audiences, including the barrier of language.

“We would transform our words into many foreign languages, so that they would come back like boomerangs,” promises their official manifesto, as translated by Bertoux.

Parrying with these boomerangs was the job of the translators, whose task was preserving the essential “Frenchness” of each piece while rendering them accessible to American audiences. Stylistically and thematically each play encompasses a singular vision and voice, but all are characterized by their particularly expressive uses of language. Bertoux and Mueller both cite festival participant Aubert as an exemplar of a playwright for whom the language itself is the primary dramatic element.

“The characters and the story are consequences of the language,” opines Bertoux. Kimberley Jannarone, who co-translated (with Erik Butler) Aubert’s Orgueil, Poursuite et Décapitation (Pride, Pursuit, and Decapitation) for Des Voix, concurs with this assessment. During a visit to the exhaustive, month-long, Festival d’Avignon, Jannarone became aware of the current emphasis on language-driven drama in modern-day France.

“Words were driving the theatrical action — they were the action,” she reflects via email. “The saying of words, the savoring of words, the relish in words, even the reflection on the delivery of words and the inability to stop them.” A chance encounter with another Aubert play at the Théâtre du peuple, in Bussang, cemented her desire to translate Pride.

“There were those words, flying all over the stage, accompanied by an exuberant theatricality impossible to put into stage directions,” Jannarone recalls. “Toy horses’ heads, leaping taxidermied animals, childishly scrawled backdrops, goofy set pieces, flying actors, barn doors swinging open into the countryside — it was nonstop action, all propelled by Aubert’s long columns of words.”

For Melrose, the challenge of translating the “heightened poetic, artfully unnatural” language of Gallet’s Communiqué N°10 lay in accurately decoding its raucous slang while preserving the air of non-naturalism encountered throughout. He was also struck by its disquieting parallels to the Trayvon Martin tragedy, a theme bound to resonate with American audiences.

One of the most interesting results of this still-untested festival is the response it’s already received from the international community. A second Des Voix festival is already in the planning stages, and Playwrights Foundation has been approached by the consulates of several other countries for consideration of similar translation projects. If all goes well, it’s heady to envision the Des Voix festival as a catalyst for a future in which San Francisco holds a reputation for being a flourishing center of contemporary theater translation, a vision that Mueller shares.

“This is just the beginning,” she promises.