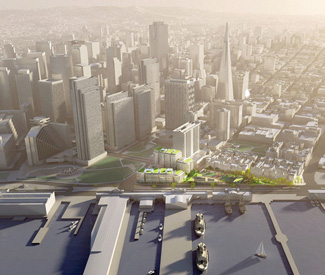 More than 100 people showed up May 15 to testify on a condominium development that involves only 134 units, but has become a symbol of the failure of San Francisco’s housing policy.

I didn’t count every single speaker, but it’s fair to say sentiment was about 2-1 against the 8 Washington project. Seniors, tenant advocates, and neighbors spoke of the excessive size and bulk of the complex, the precedent of upzoning the waterfront for the first time in half a century, the loss of the Golden Gateway Swim and Tennis Club — and, more important, the principle of using public land to build the most expensive condos in San Francisco history.

It is, even supervisors who voted in favor agreed, housing the city doesn’t need, catering to a population that doesn’t lack housing opportunities — and a project that puts the city even further out of compliance with its own affordable-housing goals.

And in the end, after more than seven hours of testimony, the board voted 8-3 in favor of the developer.

It was a defeat for progressive housing advocates and for Board President David Chiu — and it showed a schism on the board’s left flank that would have been unthinkable a few years ago. And it could also have significant implications for the fall supervisorial elections.

Sup. Jane Kim, usually an ally of Chiu, voted in favor of the project. Sup. Eric Mar, who almost always votes with the board’s left flank, supported it, too, as did Sup. Christina Olague, who is running for re-election in one of the city’s most progressive districts.

At the end of the night, only Sups. David Campos and John Avalos joined Chiu in attempting to derail 8 Washington.

The battle of 8 Washington isn’t over — the vote last week was to approve the environmental impact report and the conditional use permit, but the actual development agreement and rezoning of the site still requires board approval next month.

Both Mar and Olague said they were going to work with the developer to try to get the height and bulk of the 134-unit building reduced.

But a vote against the EIR or the CU would have killed the project, and the thumbs-up is a signal that opponents will have an upward struggle to change the minds of Olague, Kim, and Mar.

The 8 Washington project is one of a handful of defining votes that will happen over the next few months. The mayor’s proposal for a business tax reform that raises no new revenue, the budget, and the massive California Pacific Medical Center hospital project will force board members to take sides on controversial issues with heavy lobbying on both sides.

In fact, by some accounts, 8 Washington was a beneficiary of the much larger, more complicated — and frankly, more significant — CPMC development.

The building trades unions pushed furiously for 8 Washington, which isn’t surprising — the building trades tend to support almost anything that means jobs for their members and have often been in conflict with progressives over development. But the Hotel and Restaurant Employees Union joined the building trades and lined up the San Francisco Labor Council behind the deal.

And for progressive supervisors who are up for re-election and need union support — Olague and Mar, for example — defying the Labor Council on this one was tough. “Labor came out strong for this, and I respect that,” Olague told me. “That was a huge factor for me.”

She also said she’s not thrilled with the deal — “nobody’s jumping up and down. This was a hard one” — but she thinks she can get the developer to pay more fees, particularly for parking.

Kim isn’t facing re-election for another two years, and she told me her vote was all about the $11 million in affordable housing money that the developer will provide to the city. “I looked at the alternatives and I didn’t see anything that would provide any housing money at all,” she said. The money is enough to build perhaps 25 units of low- and moderate-income housing, and that’s a larger percentage than any other developer has offered, she said.

Which is true — although the available figures suggest that Simon Snellgrove, the lead project sponsor, could pay a lot more and still make a whopping profit. And the Council of Community Housing Organizations, which represents the city’s nonprofit affordable housing developers, didn’t support the deal and expressed serious reservations about it.

Several sources close to the lobbying effort told me that the message for the swing-vote supervisors was that labor wanted them to approve at least one of the two construction-job-creating developments. Opposing both CPMC and 8 Washington would have infuriated the unions, but by signing off on this one, the vulnerable supervisors might get a pass on turning down CMPC.

That’s an odd deal for labor, since CPMC is 10 times the size of 8 Washington and will involve far more jobs. But the nurses and operating engineers have been fighting with the health-care giant and there’s little chance that labor will close ranks behind the current hospital deal.

Labor excepted, the hearing was a classic of grassroots against astroturf. Some of the people who showed up and sat in the front row with pro-8 Washington stickers on later told us they had been paid $100 each to attend. Members of the San Francisco Planning and Urban Research Association, to which Snellgrove has donated substantial amounts of money in the past, showed up to promote the project.

But the real action was behind the scenes.

Among those pushing hard for the project were Chinese Chamber of Commerce consultant Rose Pak and community organizer David Ho.

Pak’s support comes after Snellgrove spent years courting the increasingly powerful Chinatown activist, who played a leading role in the effort that got Ed Lee into the Mayor’s Office. Snellgrove has traveled to China with her — and will no doubt be coughing up some money for Pak’s efforts to rebuild Chinese Hospital.

Ho was all over City Hall and was taking the point on the lobbying efforts. Right around midnight, when the final vote was approaching, he entered the board chamber and followed one of Kim’s aides, Matthias Mormino, to the rail where Mormino delivered some documents to the supervisor. Several people who observed the incident told us Ho appeared to be talking Kim in an animated fashion.

Kim told me she didn’t actually speak to Ho at that point, although she’d talked to him at other times about the project, and that “nothing he could have said would have changed anything I did at that point anyway.” Matier and Ross in the San Francisco Chronicle reported that Ho was heard outside afterward saying “don’t worry, she’s fine.”

Matier and Ross have twice mentioned that the project will benefit “Chinatown nonprofits,” but there’s nothing in any public development document to support that assertion.

Chiu told me that no Chinese community leaders called him to urge support for 8 Washington. The money that goes into the affordable housing fund could go to the Chinatown Community Development Corp., where Ho works, but it’s hardly automatic — that money will go into a city fund and can’t be earmarked for any neighborhood or organization.

CCDC director Norman Fong confirmed to me that CCDC wasn’t supporting the project. In fact, Cindy Wu, a CCDC staffer who serves on the city Planning Commission, voted against 8 Washington.

I couldn’t reach Ho to ask why he was working so hard on this deal. But one longtime political insider had a suggestion: “Sometimes it’s not about money, it’s about power. And if you want to have power, you need to win and prove you can win.”

Snellgrove will be sitting pretty if 8 Washington breaks ground. Since it’s a private deal (albeit in part on Port of San Francisco land) there’s no public record of how much money the developer stands to make. But Chiu pointed out during the meeting, and confirmed to me later by phone, that “there are only two data points we know.” One is that Snellgrow informed the Port that he expects to gross $470 million in revenue from selling the condos. The other is that construction costs are expected to come in at about $177 million. Even assuming $25 million in legal and other soft costs, that’s a huge profit margin.

And it suggests the he can well afford either to lower the heights — or, more important, to give the city a much sweeter benefits package. The affordable housing component could be tripled or quadrupled and Snellgrove’s development group would still realize far more return that even the most aggressive lenders demand.

Chiu said he’s disappointed but will continue working to improve the project. “While I was disappointed in the votes,” he said, “many of my colleagues expressed concerns about height, parking, and affordable housing fees that they can address in the upcoming project approvals.”

So what does this mean for the fall elections? It may not be a huge deal — the symbolism of 8 Washington is powerful, but if it’s built, it won’t, by itself, directly change the lives of people in Olague’s District 5 or Mar’s District 1. Certainly the vote on CPMC will have a larger, more lasting impact on the city. Labor’s support for Mar could be a huge factor, and his willingness to break with other progressives to give the building trades a favor could help him with money and organizing efforts. On the other hand, some of Olague’s opponents will use this to differentiate themselves from the incumbent. John Rizzo, who has been running in D5 for almost a year now, told me he strongly opposed 8 Washington. “It’s a clear-cut issue for me, the wrong project and a bad deal for the city.” London Breed, a challenger who is more conservative, told us: “I would not have supported this project,” she said, arguing that the zoning changes set a bad precedent for the waterfront. “There are so many reasons why it shouldn’t have happened,” she said. And while Mar is in a more centrist district, support from the left was critical in his last grassroots campaign. This won’t cost him votes against a more conservative opponent — but if it costs him enthusiasm, that could be just as bad.