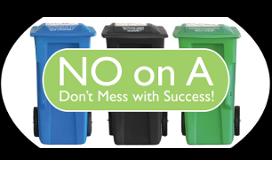 Wow. Every single slate card I’ve seen so far for this election has been paid for at least in part by Recology, which is fighting a measure that would require competitive bidding on its garbage contract.

The Richmond Democratic Club. The Teacher’s Union. The SF Women’s Political Committee. The SF Democratic Party. The Milk Club. The Alice B. Toklas Club. I’m sure there are a few more out there. And every one has a big “No on A” ad on the back.

The good news is that a lot of these mailers list good candidates for the County Central Commitee, and getting their message out to more people helps. And this is nothing new — everyone looks to the people with money to fund slate cards, and Recology’s spending a lot of money this spring. And I’m confident that every one of these groups took a No on A position before they asked for slate-card money.

Still: You look at the pile and it looks like Recology owns San Francisco politics.