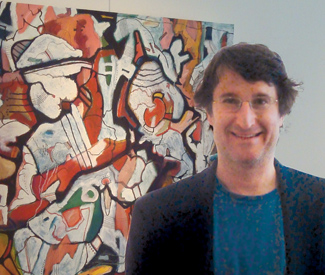 VISUAL ART As the old saying goes, a picture can be worth a thousand words. But a local gallery has united two separate artists stemming from Jewish and Islamic backgrounds to convey only one: peace.

In “Shalom/Salaam,” a joint exhibit running through May 26 at the Mishin Fine Arts gallery, self-proclaimed activist artist Tom Block and Afghan refugee Shokoor Khusrawy demonstrate that art can be more than a commodity, and rather a tool to dismantle cultural barriers and inspire change.

Although very distinct in their approaches, both artists hope their paintings will help foster a shared emotional experience among viewers that will ultimately lead to understanding across different peoples and beliefs.

Growing up in war-torn Afghanistan, Khusrawy’s childhood was marred by violence and destruction. Art supplies were costly and difficult to find, and a bad hip injury confined him to paint on the ground. Yet as bombs rained down outside his window, his desire to create beautiful images remained strong.

From a bustling street market scene to a shepherd herding his goats in the countryside, Khusrawy’s soft, impressionist-style paintings offer an insider’s view into everyday life of a country that usually evokes images of conflict and hardship.

“He shows the hope and beauty that can be found in the world — not the destruction,” says gallery owner Larisa Mishina. “He expresses a desire to live in peace.”

Block’s work, on the other hand, aims to ignite that desire in others. In modern portraits made of acrylic, ink, and collage on canvas, Block depicts some of the most influential mystics of medieval times — from both Jewish and Islamic traditions — that have inspired and borrowed from each other throughout the ages.

Among Block’s “Shalom/Salaam” pieces are an interpretation of Abu Hamid al-Ghazali, a Sufi whose work was found quoted repeatedly in Jewish writings; it sits alongside a painting of Rabbi Israel ben Eliezer, the founder of Hasidism, whose practice was heavily influenced by Sufi doctrine.

Through his portraits, and an accompanying book, Block aims to tell a positive story in a narrative that is almost entirely negative, and reveal that at the core, these ancient, warring religions are very similar. “I want people to see timeless ideas in a fresh way in the hopes that there will be a change in the heart of viewers,” Block explains.

Accordingly, much of Block’s work goes beyond the gallery. By using art projects to bring awareness of global and local issues, Block has been able to raise money for nonprofit organizations and led several events, such as the first ever Amnesty International Human Rights Art Festival, which brought together 400 artist from around the world and got the attention of several hundred more. A collection of his other work is also on display at the Mishin Gallery in “Working toward Beauty.”

The exhibits are Block’s first in a commercial gallery and Khusrawy’s first in the US. Both artists have only been able to present at universities, libraries, and nonprofit organizations. “Galleries have always told me to leave my ideas at the door,” Block says.

But the exhibits are also a first for Mishin Fine Arts, which boasts a collection of 30 contemporary artists from all over the world, including Italy, Spain, and Russia. Although the artists in the gallery’s existing collection all have “profound messages,” Mishina says Block and Khusrawy’s exhibits are her first real step toward creating a space for more meaningful art.

“They are both raw talents, they are very sincere in what they do, and people feel it,” Mishina notes. “This brings true value to the gallery, which we want to share with art collectors.”

Block hopes the exhibits will open the eyes of art collectors to new, profound ideas of art and what it can do. “There’s a whole movement just waiting to be galvanized,” he says. *

“SHALOM/SALAAM” AND “WORKING TOWARD BEAUTY”