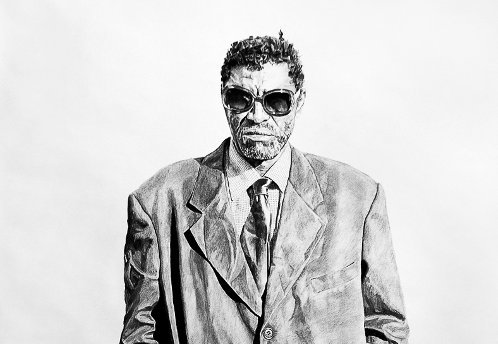 “I’m really interested in the idea of anonymity within a dense urban environment and how the denser an urban population is, the easier it is to be overlooked,” Joel Phillips says over a glass of red wine on a far too windy night in the Mission. His show, “No Regrets in Life,” opens tonight at Satellite66 and will feature seven charcoal and graphite drawings of men and women he’s met on the corner of Sixth St. and Mission.

Phillips, a few months shy of 23, has spent significant chunks of time in Seattle, Santa Barbara, San Francisco, and New York. While he was living in New York, he started thinking more about the social dynamics of cities and how some people tend to get lost in the mix. “In New York no one really looks you in the eye, everyone brushes past you and moves past you,” Phillips says.

In an effort to counter this surplus of vacuous interactions, Phillips started asking one in every ten people he met on the streets of Manhattan if he could take their photo. “The response [was] overwhelmingly negative,” Phillips recalls. “Probably 85 percent of the people said ‘Fuck off, leave me alone, get out of my way, what the hell do you want my picture for?’”

But the ones who willingly posed in front of Phillips lens “were a very particular subset of the population — people who had time and were looking for interactions.” Phillips recalls conversing with Richard, a homeless man who became the subject of his first life size drawing, for three hours before taking his photo. “He had the most amazing story. He had been everything from a horserace photographer to a foot soldier in WWII in General Patton’s division.”

After graduating with an art degree from Westmont College, Phillips moved to San Francisco for a graphic design position; and for the city’s rich imagery and artistic potential. “Part of the reason I fell in love with San Francisco was its amazing diversity of people and how you can look at all these people on the street and really see stories, particularly in their eyes and the lines on their faces.”

Phillips fortuitously fell into an artist homeshare-studio space on the corner of Sixth and Mission — a massive building with high ceilings, large windows, and not much insulation. “I hadn’t really done my research on the corner,” Phillips says. “There’s a lot of homelessness and drug dealing, [and] I didn’t know until I moved there that it was one of the most crime-ridden corners in the city. But it’s a very communal corner in a strange way.”

Since moving to Sixth and Mission less than a year ago, Phillips has rapped with, photographed, and drawn a number of people on his corner.

Phillips says Spaceman OT, a man he approached and decided to draw, was “one of the most lively people I’ve ever met.” Spaceman “wears a life vest at all times in case of a flood, a bicycle helmet, and snowboard goggles. He bargained me into buying him lunch in exchange for a picture, so we hung out and he was just the most fun person — he was dancing around on the sidewalk, sweeping up things, he has these lightsaber battles with his broom — he pretends he’s Darth Vader.”

I’m really interested in “taking people we don’t know how to interact with on a day-to-day basis, particularly people who may be homeless, they might not be homeless, but don’t seem like they’re easy to approach, whether they’re talking to themselves or whether their coat has a hole in it, . . . out of that dark unlit area they’ve fallen into socially and bring[ing] them into a spotlight by obsessively rendering them.”

Phillips’ passion for people comes through within the span of a short (or in our case very long) conversation. “I’m not necessarily trying to make a statement about homelessness in general. I’m really just trying to take my own artistic process and apply it to these kind of people I find really interesting and amazing,” he says.