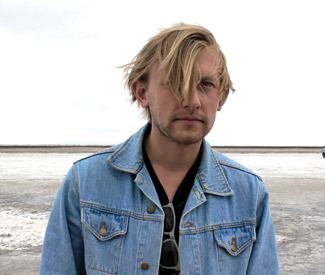 MUSIC Van Pierszalowski’s story writes itself: musician finds love in picturesque European city, swims in fjords, writes a fuzzy grunge-inflected record about it and his travels, and calls the band WATERS (appearing Thu/10 at the Fillmore). “I met a girl,” he says from the road. “And I just wanted to get back over there. It was a place to work on songs, refocus.”

Even his story before the present wrote itself: young man travels to Alaska to fish with his father and creates chilly, acoustic folk soundscapes, names the band Port O’Brien after an Alaskan Bay.

This all happened. Only life isn’t all one big linear story, and Pierszalowski isn’t nearly so precious as implied within these tales. He never stopped writing songs between the break-up of Port O’Brien and formation of WATERS. He was bouncing back and forth between Oslo and San Francisco for two years, with stops here and there in New York and Alaska, also Dallas in spring of 2011 to record a full-length with producer John Congleton (St. Vincent, Bill Callahan).

His first and latest album for WATERS — Out in the Light — came out last September to a flurry of positive reviews, tales of rebirth, etc. The record produced anthemic “For the One” (and its trippy dreamcatcher-based video), which kicks off with a slow buzz breaking into a chainsaw pop guitar line, and Pierszalowski pleading, “Oh my god I thought I was a free man out on road,” later in chorus, “when I wake up/and I take you with me/I’ve seen too much of old/And I’m not waiting.”

So what happens after the initial burst of new-band hype? Pierszalowski is still in love, and touring much of the year. When home in the Bay Area for brief snippets of time, he and the girl — Marte Solbakken — live together, and frequent Dynamo Donuts for sustenance. “I live up there on Potrero Hill. Everything’s there, that’s our home.”

While Pierszalowski is ringleader and songwriter, the current incarnation of the band — drummer Nicholas Wolch and bassist Alexander Margitich, both from Santa Rosa, guitarist Aaron Bradshaw, and Solbakken on keys and singing — has been touring the States together for some time.

This summer they’ll be back in Oslo briefly, and before that, more tours, including an opening slot for Delta Spirit, which brings the band to the Fillmore this week. Following that, there’s another tour with Nada Surf in June.

They’ll traverse the wide-open plains and rather familiar coasts of the U.S. — when not fishing in Alaska, Pierszalowski was raised in tiny coastal Cambria, just south of the Hearst Castle.

He wasn’t a surfer like many of the locals, so he found solace in music, taking inspiration from a long line of iconic guitarists and singers, starting with Billie Joe Armstrong in junior high, moving up to Joey Ramone, Thom Yorke, Neil Young, Will Oldham, and his most consistant inspiration, Kurt Cobain.

“I’ve always gone on record as saying In Utero is my favorite record of all time,” he says. Nirvana was an influence on Port O’Brien’s sound and a huge influence on WATERS.

So what’s next? Pierszalowski is feeling the pressure to start creating new music again, has written a few songs on the sly, and is already fantasizing about the next record — he’s hoping to get back in the studio at the end of the year. It’s his life on the road with the one that he loves, but it’s not just a simple fairytale. There are donuts involved.