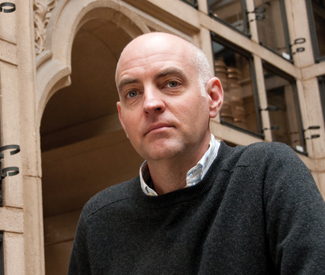 VISUAL ART Daniel Clowes draws eyes that are eerily human. Dotting the pages of his well-regarded graphic novels, they are by turns embittered, despairing, and vulnerable. So it’s fitting that the Clowes’ first major retrospective is at the Oakland Museum of California. Oakland is an underdog city, and Clowes — a longtime resident — champions underdogs.

After its Bay Area run, the exhibition will go on to major cities in the U.S. and Europe. It spans his career to date, with panels from Ghost World and Wilson, as well as work for the New York Times and the New Yorker. A book, The Art of Daniel Clowes: Modern Cartoonist, was recently published in conjunction with the show, and is already in reprint.

I recently spoke with Clowes about the dream-like experience of seeing his subconscious from 20 feet away.

San Francisco Bay Guardian Comic book art goes through cycles of popularity. Where do you think we’re at right now?

Daniel Clowes It’s always like I’m at the eye of the hurricane. I can’t see what the zeitgeist is in terms of how comics are being taken by the public, you know? The feeling that people are going to inherently dismiss comics because they’re comics seems to be evaporating. People who 20 years ago would have nothing but disdain or horror if you told them that you drew comics are now sort of interested and see that as a viable means of expression. But I can’t tell if we’re in a bubble and it’s all going to disappear, or if it’s just going to get bigger.

SFBG Do you experience your own art differently at the museum?

DC I never see my artwork from a distance. The farthest I can get from my artwork in my studio is like 10 feet at the most, and I wouldn’t even do that. And so to see it on a wall, you see it in a very different way. You see the way it works compositionally. It’s just an abstract grouping of black shapes on a page. If I were intending work to go on a wall, I would do it very differently: it would be all about making those black shapes appealing from 20 feet away. And now it’s just sort of luck if that happens or not. It doesn’t have anything to do with what I’m trying to do.

SFBG The panels get larger as you progress through the show from the early work to the later work. They seemed more dense with subtext but with fewer lines.

DC That’s something I’m working toward. A certain kind of efficiency. I feel like any extra line distracts from the reading of a comic. I really want the reader to feel immersed in the story. I think the reason why the artwork got bigger over the years is, when I started, I couldn’t afford the paper. I had to try to squeeze like four pages onto one big sheet of paper. Also I used to have to send my artwork to the publisher — this was all before scanning. And so, if the artwork was really big it would cost a lot more money to send and it would get bent in half in the mail.

SFBG What’s the process you go through when you draw the eyes of your characters?

DC That’s always the last thing I do on a drawing. I leave the eyes blank. And people have come over and seen my work on the drawing board and found it very disconcerting and very weird that there are these faces with no eyes. But [the eyes are] the key to the drawing. That’s by far the most important part. And the eyes have to show some humanity behind them — even if they’re very simple circles. That’s how you can tell if a character is alive or not. It’s not something you can consciously do. I don’t really know what the secret to that is, except you have to sort of believe that they’re alive.

SFBG How do you feel about having your work preserved in a museum?

DC I think of the museum iteration of this work as being a temporary thing. I don’t see that as being where this work would end up. I would hope that [in the distant future] it would end up in book form, that people [will] still knew how to manipulate the pages of books and read them.

SFBG Has anything about the show surprised you?

DC Walking into that room was a strange experience. I really felt claustrophobic, like I was trapped in my own brain somehow. It was very dream-like. Last week was the most dream-like week I’ve had. Right after I went to the opening the other night, I came home and my son and I were out on our porch and we saw a car going 90 miles an hour. It hit the median right in front of the house, flew through the air, turned upside-down, and landed on its roof. It was the most horrific thing I’ve ever seen. And then, miraculously — there were little kids [inside], and [they] crawled out of this broken car. The next day I was like, was all that a dream? I was in a room with all my artwork and then I saw a car fly through the air. It was just so odd.

SFBG It was the same week as that thunderstorm.

DC Yes, it was all that stuff. It was very surreal. *