Home Reflecting on violence at the SF Commune 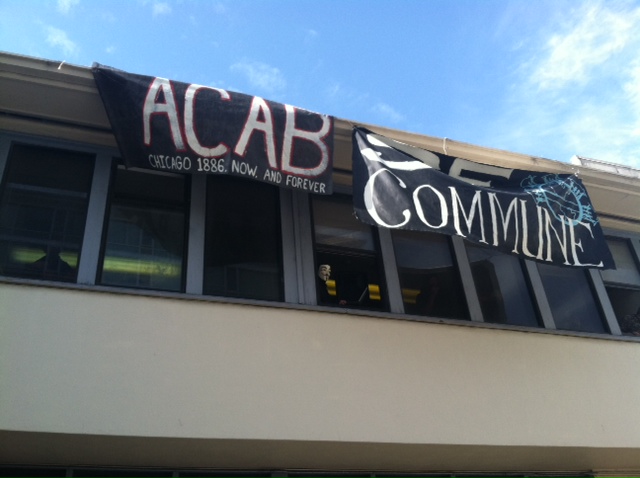 Occupy San Francisco protesters entered Catholic Church-owned properties at 888 Turk last night. This is the same building that a similar group occupied April 1, in a peaceful action that lasted about 24 hours.

The successful reentry was a testament to the spread of skills and cultures surrounding building takeovers by groups like Homes Not Jails. The resulting “rebirth of the SF Commune” was a mellow and pleasant event at first, as protesters on a march from the celebratory Peoples Street Festival joined in the commune. Some held back in the street while others entered the building in hopes of building a “community center”—most remained outside the building, enjoying a free meal cooked and served by some of the same Occupy SF kitchen volunteers that once fed hundreds of people daily at Justin Herman Plaza.

The building occupation was meant to affirm a strong belief in the rights of people to gather and organize, or at the very least have a warm place to sleep at night. It was also an assertion from Occupy: we’re still here, your warnings to property owners to board up their vacant buildings and the chain-link fence you put up in front of 888 Turk (which protesters casually removed upon arrival) won’t stop us.

“The Catholic church owns it. They’re supposed to be doing charity, but they’re leaving it vacant until they can get high rent out of it,” said Jazzie Collins that afternoon, an organizer with Senior Action Network who was there to support the May Day actions.

“There’s too many vacant buildings in this city, while people sleep on the streets.”

Collins spoke only for herself, but her take on the situation matched the sentiments of many who questioned the importance of property rights in the light of unused building and homelessness throughout the city. That’s the same reason that the SF Commune had sprung up in the same building, exactly one month earlier.

Police spokesperson Sergeant Michael Andraychak seemed to believe that this repeat occupation would turn out the same way. “We’re putting up some barricades attempting to restrict access to the building,” said Andraychak around 5pm. “We’re opening traffic back up.”

But not half an hour later, when the police put up the final barricades sealing off access to the building, the dozen or so people who got caught inside pushed back at the barricade. Police responded with intimidating and striking a few with batons. Then, a man appeared on the roof.

His face was covered in a black bandanna. He raised his arms, and in each hand, he held a brick. Onlookers began shouting, “don’t throw those!” He did though. He hit one man in the face, a fellow protester who, according to one source, has supported the Occupy SF effort since the camp.

The mood of the crowd chilled. The brick-thrower held up more bricks, menacingly.

Police closed the street off to traffic. Soon most protesters, supporters, and interested bystanders were on the other side of Gough or in the park, watching the events. A few spoke to and yelled at police lined up on the corners. Hundreds more police stood ground on Turk in front of the building. A few dozen remained inside, including one who had appeared on the roof, taken the bricks from the assailant, and tossed them off, out of reach.

A dozen or so remained in the building during the stand-off. Some poked their faces out an open window, hung down peace sign painted on a piece of cardboard, and talked into a megaphone. “We are not armed, we are completely peaceful,” one man assured. Meanwhile, police told press that they estimated 200 were inside and were “stockpiling pipes, bricks.”

The stand-off continued for a few hours until, at 7:30pm, police cleared out of the area. Most activists had left- thousands were massing in Oakland. But 40 or so people remained and re-entered the building. Many stayed until police came around 5am, arresting 26. Seven remain in custody, and all have been charged with trespassing. (Indicating that the weapon stockpiling concern turned out to be false. Which, as far as I could tell inside the building, it certainly was).

At that point, I entered the building as well to speak with those that remained. How did they feel about the violence? Did they think it was connected to the previous night’s events, when mysterious protesters destroyed numerous Valencia St businesses and cars in what some Occupy SF protesters suspect was an act of provocateurs?

For a response to come from Occupy SF, it must be consented on at a general assembly, a long process. So all the respondents represent only themselves- though most chose to remain anonymous. This structure can lead to a troubling lack of accountability: if something harmful happens at an action, who can be expected to explain it and help to prevent it in the future if everyone is responsible for only themselves? At the same time, each personal answer is less riddled in spin than a form answer would be, since people speak honestly, and for only themselves.

The Valencia St destruction “was enough that I didn’t come out and do anything today, whether it was Occupy or not,” one woman who had been “pretty involved in camp, back when it was at JHP” told me. “They were there to piggy back off an Occupy event, to use the organization of Occupy to organize themselves,”

The brick incident, however, did not caution her against showing up, as she did later that night. “Incidents like this happen often with mentally ill or violent people, but they get more publicity when they’re at an Occupy event.”

D, a longtime Occupy SF organizer, said wearily that “we were all surprised” at the incident.
“We weren’t expecting any bricks to be thrown,” he said, “and we didn’t want anyone to get hurt.”

But in terms of preventing similar actions in the future, D said, “We can only do so much. Everybody’s an autonomous individual and we can’t control what they do.”

“We can try to clean up everything that could be thrown, we did that last time. This time we focused more on stopping graffiti in the building. There wasn’t any.”

“That’s my friend. When I saw the brick flying at his face, I was hurt. Half our crew is in the hospital with him right now,” said another organizer. “But the real violence is the system putting people on the street, and the cops enforcing that. I’ve seen [Nesbitt] beat up by police.”

“What should we do, just turn our backs on people with mental illnesses?” another piped up.

“This whole occupy thing at this point is so spread out and separated,” said a self-described Occupy SF supporter. “There are parts that are revolutionary and parts that are more reform, and they’re trying to bridge that. I don’t know what it is at this point anymore. But I know I support a movement to articulate the rage at what’s happening in our country right now.”