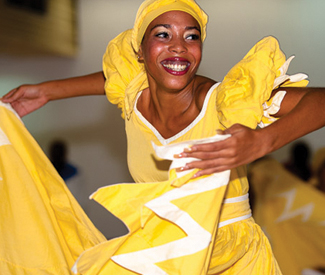 DANCE How do you keep a performance festival alive in a city known for its fractured arts community? A place where officialdom is not exactly ready to jump on the bandwagon, especially when belt-tightening by cutting the arts has become a national sport? Simple. You enlist the people who have always been the arts’ biggest supporters — the artists themselves. They know how to work with limited resources; they are risk-takers and have accepted that what they love to do will never make them rich.

The approach seems to work. “This year, we have had the biggest advance ticket sales ever,” says Andrew Wood, executive director of the San Francisco International Arts Festival. What Wood has done since 2003 is develop his own version of “think globally, act locally.”

The British-born impresario has programmed discoveries from around the world that often erase traditional boundaries between theater and dance. They bring a whiff of global artistic trade winds and broaden our sometimes narrow perspectives. In 2009 it was South Korea’s stunning Cho-In Theatre, which performed The Angel and the Woodcutter without speaking a single word. Last year, Polish import Teatr Zar’s multi-venue performance of The Gospels of Childhood Triptych seared itself into memory. Sometimes, glimpses into non-American cultural productions can look eerily prescient, as with 2006’s The Solitary — an exchange between a prisoner and his jailer — by Syria’s Al-Khareef Theatre Troupe.

Engagements by international companies are only possible because they bring a lot of their own funding, either from their own governments or cultural organizations in this country. Sasha Waltz and Guests’ 2009 Travelogue I, for instance, would not have been possible without the Goethe-Institut’s support.

“Most people [abroad] don’t realize how under-resourced we are in this country,” Wood explains. In terms of performance fees he tells the artists that “this is what I can offer if we get the money, otherwise I’ll pay you what I can.”

One of Wood’s biggest challenges, besides patching together the money for the companies he wants to present, is getting them here at all. The State Department has its own ideas of who should be seen by Bay Area audiences. Last year an Iraqi group’s engagement fell short when only two of its company members received visas. This year the “permission slips” for Cuba’s Raices Profundas, SFIAF’s opening act, came through at the last minute.

Raices’ mixed program will offer a perspective on Afro-Cuban dance grounded in both its ritualistic and popular social dance traditions. While he greatly admires the breath and depth of their artistry, bringing this company to the fest “is as much a political act as any thing else,” Wood says. “We have to maintain the human connection [with these artists]. They are in such difficult positions, and they work so hard living in a kind of netherworld where rules don’t work.”

One of the festival’s hallmarks has become the shared programs between local and guest dancers. One can only image the backstage cross-cultural fertilizations that must take place between artists that previously may have known very little of each other.

This year the Swiss company Cie 7273’s Listen and Watch is sharing an evening with Thieves by Oakland’s Dance Elixir. Both works are based on the intimate relationships with music performed live on stage. Two first US showings and a world premiere (created in Tallinn, Estonia; San Francisco; and Helsinki) are on a triple bill with Cid Pearlman Performance Project, Post: Ballet’s Robert Dekkers, and Susanna Leinonen Company.

A welcome opportunity to see two previously shown pieces will come from AXIS Dance Company’s astounding 2011 collaboration with Marc Brew Company, Full of Words. Brew will also dance the American premiere of his solo Remember When. In 2010, inkBoat’s The Crazy Cloud Collection, named after a 15th century Zen monk — the purported subject of this astounding collaboration with Butoh artist Ko Murobushi — looked anarchic, maddeningly obscure, and totally mesmerizing. I’ll attend this encore performance for sure. *