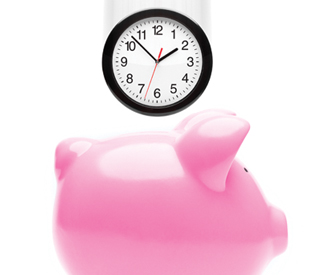 The economy had collapsed. Mira Luna became ill with Lyme disease, lost her job, and then gotten buried under a mountain of medical bills. She went into bankruptcy. But it wasn’t more money she longed for — it was community.

That’s how Luna got into the time business.

She’s co-founder of Bay Area Community Exchange (BACE, www.sfbace.org), which offers a time bank, which uses work-hours as currency. Members offer goods and services, and other users “buy” them. For each hour I spend, say, teaching you French, you transfer one of your hours to me. Then I have hours with which to buy things from others.

Founded in 2009, the time bank has grown steadily, and now has 1400 members across the Bay Area.

“I had always wanted to start an alternative currency,” Luna told us, “but people weren’t too interested until the economy collapsed.”

When Luna helped start the BACE project, it was a meeting of different groups working on alternative currencies in the Bay Area.

“Some of them have spun off, like Bernal Bucks,” Luna said. Bernal Bucks is another successful alternative currency program, in which residents of Bernal Heights can get a debit card through a local bank and receive rewards when they spend money at local businesses.

Luna was interested in taking the concept one step further and she liked the egalitarian nature of the time unit. But she says most people who use the time bank haven’t replaced US currency with time—they just used both.

Initially, she thought the time unit just “seemed like the easiest currency to get started.” But she and other co-founders, including Ricardo Simon, have become intrigued by different dimensions and possibilities of this alternative to alternative currency.

“Not all currencies are alike. Many of them are tied to the dollar, where ours isn’t at all. Ours isn’t really a currency actually. Everyone’s hours have the same value,” Simon said.

“Everybody’s hour is equal on the timebank,” explained Luna. “It’s worth the same whether you’ve gone to college for seven years or you haven’t gone to college, whether you’ve done a lot of manual labor or not…This is a system for people who are undervalued in that traditional marketplace.”

Someone living paycheck to paycheck, then, can use the timebank to get an hour-long massage.

As the timebank’s website says, “Timebanks also help enrich our lives with things we may not normally be able to afford, like language lessons or massage. Spending time dollars instead of cash can help you save money for expenses like rent, medicine, and food.”

But what if that massage sucks? Or, when you meet the person who offered it to you, you decide you don’t want them touching you after all?

“I haven’t gotten that kind of complaint,” Luna said. “I think because it’s not just about the service, it’s about the relationship.”

Users can read notes on the people they are accepting services from before they make their decision. Luna says trust mechanisms like user profiles with comments from other members and tallies of how many transactions a person has done work well for the timebank—as they have been working well for websites like Yelp, Wikipedia, and Kiva.

Speaking at last weekend’s Creative Currency conference, Katherine Woo, vice president of product at Kiva, said the company was mocked when it first started. Critics said that micro-loan recipients would never pay back their lenders—now, the company sees a 98 percent payback rate.

“If you build the right trust mechanisms into the system, people believe,” Woo said.

Luna made a presentation about the timebank at the conference. The idea was to pack the room with people from social media companies, websites that facilitate financial transactions, community groups, and local government representatives — and then have them work all weekend on a few agreed upon projects.

Improving the time bank was one of them, and, now that the weekend’s out, it has shiny new Short Message Service (SMS) capabilities.

“I didn’t appreciate the SMS until you actually get to play with it,” said Tom Brown, who has volunteered to help develop much of the software that BACE uses. “While we were testing SMS stuff, a request was sent off as a test, for help with some art. It got a response within a minute.”

Incidentally, Brown uses the timebank, too, “mostly for trips to the airport, or my car is broken down and I need a ride. Usually it’s transportation.”

Others, however, have used the timebank to launch careers, including Zach Cohen, who founded Berkeley’s Biketopia repair shop. Cohen, used hours gained from the time bank — and the community surrounding him — to help start his business. He was earning hours through volunteering at San Francisco’s Bike Kitchen, a co-op where volunteers fix bikes or pay a fee, and can in turn bring in their bikes for help. He wanted to start a similar venture in Berkeley.

“I’d earned the hours volunteering personally, and I used it to recruit board members,” Cohen told me. He also got graphic design and marketing services in exchange for timebank hours. With much less capitol than this kind of thing generally requires, he was able to start the business.

“I used money as well, but I supplemented it with the timebank,” said Cohen, who now holds youth bike repair workshops at Biketopia.

The timebank has also inspired other groups in San Francisco. When some members of People Organizing to Demand Environmental and Economic Rights (PODER) SF met with timebank organizers, they knew they wanted to start something similar to serve residents of the Mission and the Excelsior.

“In our community we have people with so many talents, from gardening, to fixing up bikes, to lawyer skills, you name it. And we felt we weren’t doing enough with those skills in these rough economic times,” said Oscar Grande, a community organizer with PODER. “We fell in love with the concept, with the ideals around it.”

But the form — the online-based exchange platform — didn’t seem right.

“We wanted a space where young people and elders can come together, and the only way to really do that is face to face. The digital divide is very real in our community, especially with immigrants, with the elderly and younger folks,” he said.

“We didn’t want to have that negative connotation going into this. Folks are like, banks aren’t doing right by us. The first thing people think is debt, oh my god how much am I going to be in the hole,” Grande said. “So we call it what it is, a community cooperative.”

The community cooperative meets at regular convivios—gatherings that are all about “coming together, breaking bread, a social atmosphere,” Grande said. “It’s basically serving as our marketplace or barter market where people are coming to exchange. What people need from home repair stuff, broken doors, want to learn how to drive, want to learn how to put together a resume, then people who are offering stuff like, I know Word. I fix cars. I paint houses, I can help you paint your house.”

According to Grande, member of the cooperative are “loving that they have a place to go and share their skills with someone else, and a place to go to for help, be it material support or moral and social support. A big issue in our community is isolation, especially if you can’t navigate the language, the system, or you’re a recent immigrant and you’re family is back in El Salvador, in Nicargaua.” As Luna understood when she was ill, this isolation and economic disempowerment are intrinsically connected. The economy might recover, but people don’t seem likely to lose interest in the timebank’s alternative currency — and the possibilities it brings with it — anytime soon.