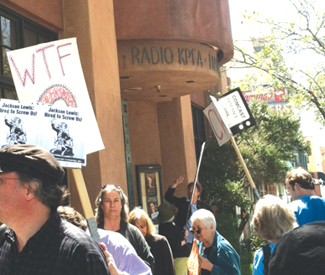 If you’re a member of KPFA, the progressive Berkeley radio station, you’ll be receiving a ballot in the mail shortly with one issue at hand: the recall of Tracy Rosenberg. She’s an elected member of the Local Station Board, and her critics want her removed from office.

Rosenberg is also the former chair of the Finance Committee at Pacifica Network, the nonprofit that owns KPFA. And she has become the face of a conflict at KPFA that is about issues much bigger than Rosenberg herself. The petition to recall Rosenberg accuses her of stealing an email list of KPFA supporters, of election fraud in a 2011 Local Station Board election, and of orchestrating the cancellation of the station’s beloved Morning Show. But there’s a deeper issue here: How should the famously fractious KPFA handle a downturn in financial support — and should the station rely more on volunteer programming and less on paid professional staff? How will the station, which is an essential part of the Bay Area left, face a changing media landscape?

As the staff at KPFA—administrative and broadcaster, paid and unpaid, union and non-union—try to answer these questions, most of them with a real commitment to progressive radio, they are also mired in a political dispute that’s been draining for everyone involved.

KPFA has a long history of providing news and critique that supports progressive efforts and questions the status quo. But, like most businesses, it took a hit in the 2008 financial crisis.

That came a decade after some dramatic governance changes. In July 1999, Pacifica put all the local staff on administrative leave and brought in staff from Houston affiliate KPFT to run the station. In response, hundreds protested in the streets, and the establishment of a detailed democratic governing structure came out of the dispute. Soon after, listener donations took off—parties on both sides attribute this to an increased demand for progressive content in the wake of 9/11 and the war on Iraq. But around 2007, KPFA started to use up the last of its reserves.

According to data provided by the station, listener contributions peaked at more than $4 million during fiscal year 2005, and then began to level off. By 2010, donation income was back below $3 million —still more than 2001 levels. As donations dropped significantly during those five years, salaries and related personnel expenses continued a slow and steady increase, and KPFA managed to avoid outright staff and programming cuts.

That is, until September 2008, when the hosts and producers of the Morning Show were laid off and the show cancelled.

According to the recall campaign, the lay offs were retaliatory (the Morning Show staff had criticized Pacifica management on the air). According to defenders, canceling the Morning Show was a necessary budget decision. The recall campaign argues that the dire financial situation has stabilized after the Morning Show was cancelled; the recall people say that the local board had already balanced it through buyouts. The recall crowd says donations have gone down; the other crowd, they’ve shifted, but remain about the same. According to Brian Edwards-Tiekert, one of the forces behind the recall effort, “At the start of the dispute were these retaliatory firings a year and a half ago. It became a recall because of how they dealt with it.”

The Pacifica Foundation has partnered with KPFA since they were both founded out of anti-war movements in the late 1940s, but their relationship has evolved over the years. As it stands, KPFA and Pacifica’s four other member stations pay yearly dues to the foundation; Pacifica, in turn, provides program that is syndicated over many stations such Free Speech Radio News and Democracy Now!

The Save KPFA campaign website makes the case that Pacifica “uses KPFA as a cash cow,” and notes money KPFA loaned to Pacifica around 2000, from which Pacifica apparently still owes KPFA $1.4 million.

As a staff-elected representative on KPFA’s Local Station Board, Edwards-Tiekert pushed back on attempts by Pacifica to seize station funds. The Morning Show invited Pacifica’s executives onto to the airwaves and “challenged them about how much they were taking from KPFA, and about Pacifica’s spending priorities,” the site reads.

“All of those charges are somewhat overstated. There’s a certain percentage of KPFA’s budget that goes to overall expenses,” Rosenberg told us. In fact, according to Rosenberg’s allies, the situation was reversed; KPFA had run out of funds and was threatening to bankrupt Pacifica. In response to budget shortfalls, Pacifica’s executive director Arlene Engleheart “asked all five Pacifica stations to cut down on paid staff 2-3 years ago, as the only way to meet escalating deficits, KPFA’s 4 “sister” Pacifica stations have already done this. Only KPFA continued to employ more paid staff than it can afford.”

According to the website of a campaign against the recall, Support KPFA, in the fall of 2010, KPFA owed Pacifica more than $100,000 in unpaid dues. “At that time I was the representative from KPFA at the national Finance Committee, which does the budget from KPFA after it comes back from the local level,” said Rosenberg. She claims that the budget that the board came up with came short of meeting expenses.

“So as a board member I went to the station and said, where’s the budget? So I pushed for a couple of meetings saying look, a budget has to come up here that makes sense and is balanced. I told the executive director it was her responsively to make sure a plan for a balanced budget went forward. I would say that I put some pressure on the executive director to make some hard decisions.”

Communication Workers of America Local 9415, a union that represents KPFA’s paid workers, brought the issue to the National Labor Relations Board in late 2011, and the federal agency dismissed five charges of retaliation and layoffs out of the seniority order. Edwards-Tiekert, however, was reinstated as the result of a successful union grievance.

The other charges on the recall petition include putting forward two motions to overturn Jan 2011 local station board elections under fraudulent auspices and for specious reasons and misappropriating a list of KPFA members’ personal email addresses.

The election fraud charge refers to a motion Rosenberg brought disqualify Dan Siegel, an attorney who was elected to the Local Station Board, from holding his seat, based on Pacifica policy barring individuals who hold a public office from serving on the board.

“I pointed out that this seemed to be a violation of the bylaws. That’s all I did,” she said.

But the incident turned into a court battle, and a judge eventually issued an injunction reinstating Siegel.

The email theft charge refers to an email blast that Rosenberg sent out concerning the Morning Mix, the Morning Show’s replacement.

The Morning Show provided an in-depth look at stories from around the Bay Area. It had, and still has, a large following. “The corporate media doesn’t cover real issues as they really affect people,” said Sasha Futran, a listener member of the Local Station Board. With its cancellation, she said, “I want to know what’s going on. I want intelligent analysis.”

Democracy Now!—the foremost example of professional progressive journalism in the country—is now KPFA’s highest donation-generating show. And in style and content, the Morning Mix is distinctly not a Bay Area version of Democracy Now!

Instead, it is a show with rotating hosts Dennis Bernstein, Davey D Cook, JR Valrey, Andres Soto, Anita Johnson, Peter Phillips and Mickey Huff. The content and approach varies depending on the host.

Henry Norr, a listener and elected member of the Local Station Board, is pleased with the format, and thinks it might represent a good path for KPFA. “The station should be more community-oriented. We should have a diversity of voices, and lots of people on who aren’t skilled or paid but represent progressive voices and active movements,” said Norr. The new show has increased coverage of Richmond politics and has provided a forum for Valrey and Cook to talk about left-wing politics from an African-American perspective.

But cutting the Morning Show had its financial implications: The old format brought in significantly more donations than the Morning Mix. According to KPFA documents, donations have increased in other time slots that air more traditional-sounding journalism, including during Letters and Politics, Flashpoints, and the Evening News.

So the recall is about the Morning Show, but it’s also about the future: Should KPFA seek to retain a traditional structure, with paid staff who can earn a decent living and focus on making news programs whose quality compares to that of more mainstream outlets? Or should the station solve its budget woes by relying on more community volunteers with more wide-ranging content?

And should the people who work at KPFA have the right to discuss the station’s finances, policies and future openly, on the air, without fear of retaliation?

Rosenberg or not, those issues aren’t going away.