Home Even more from the tUnE-yArDs interview 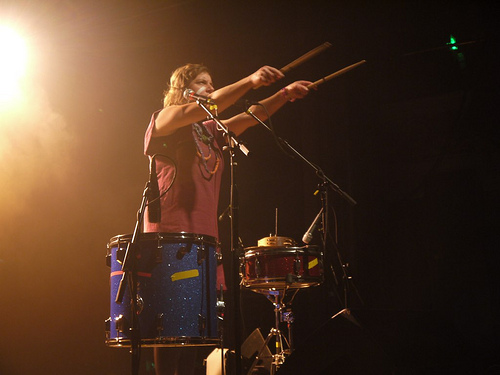 Despite a relentless touring schedule, and an intense side-project, scoring the upcoming SFIFF-presented evening of Buster Keaton shorts at the Castro Theatre with Oakland-based guitar virtuoso Ava Mendoza, Merrill Garbus, the artist otherwise known as tUnE-yArDs, gave us a great interview, and not all of it could fit in this week’s print feature on Garbus and St. Vincent.

While currently living in Oakland, Garbus hails from the East Coast, and has also lived in Kenya and Montreal, a combination of influences that allows her and her singular, quixotic music to avoid falling into a trap of regionalism or simple categorization. Catch tUnE-yArDs with Ava Mendoza at the Castro on April 23, and at the Fox Theater April 24, in concert with St. Vincent.

SFBG: You spent time studying music in Kenya, what elements of your current musical style do you attribute directly to that experience? What are some of your other influences?

Merrill Garbus: I mostly was very humbled in my study of music there. I studied taarabu (Taarab music) and I was a pretty weak student at the harmonium. So much of that music is based on the Swahili poetry, which was so complex linguistically that I hardly understood it.

But studying any music is a way of absorbing it, as well as a way of practicing those basics of musicianship: playing by ear, repetition on an instrument, playing with other people.

It was also the experience of listening to the popular music in Kenya at that time that really influenced me, specifically pop music from Congo, which they called Lingala in Kenya. I had never heard music like that, and especially that kind of music that compelled a person to dance so instantaneously.

SFBG: What made you decide to use the uke as your primary instrument instead of the fiddle or guitar or something more “traditional” as a lead?

MG: The ukulele is so unassuming; it sounds nice when you’re not even trying – it even has a charm when it’s really out of tune, I think. It makes a space for itself. As a guitar player one has to really prove themselves, to stand out among all the other guitar players of the world and of the past. The ukulele made the songs the focal point, instead of putting pressure on me to be particularly virtuosic on an instrument.

SFBG: Tell me a little about your previous vocal training.

MG: I studied a bit of classical singing in high school, and sang with a madrigal group which taught me a lot about blending with other voices. I sang in a college a cappella group which was great performance training and is more about belting and volume, which has certainly helped me; and I took some opera lessons when I wrote a puppet opera.

Theater training gave me a lot of vocal skills, too, particularly studying with members of the Roy Hart Theater and doing work with Viewpoints and Suzuki (Theater Suzuki, different than the musical training.) Through the theater work, I learned to expand the palette of vocal sounds that were accessible to me.

SFBG: I’d love to hear a little more about your theatrical background, and how you think it influences your approach to staging.

MG: I think it’s more than staging, although recently we’ve been talking about stage props and lighting and all of these other things that bring me right back to undergraduate theater studies…I know a lot of bands who struggle with live performance because it’s a secondary thing to writing songs, and for me I’m realizing how primary it is to consider the performance. Even in the studio, even in front of my computer doing busy-work editing, it’s a kind of performance, an improvisation of sorts, following my instinct in the moment.

SFBG: You have a fondness for creative spelling, not just with alternating caps, but also with dropping the “r”’s at the end, adding “z”’s, etc. What’s your intention there?

MG: I like to play with spelling because poor spelling is, most of the time, associated with ignorance and being wrong, but as we learn from Black culture, misspelling and screwing around with language is often an intentional reappropriation, to turn the language of the over-powering forces into a language of one’s own.

In Swahili, there are certain words, like “taksi,” which are Swahili spellings of things that didn’t exist before the language of the colonizers appeared, so what’s left is a British/Western idea, a British/Western word, with an African spelling.

I tend to use spelling and pronunciation as a humbling force, for instance, people feel slightly stupid every time they say, “Pow-a.” It makes people uncomfortable, and there’s a sense the friction: they have to make a choice. Do I say, “Pow-er” or “Pow-a?” Which makes me look like less of the asshole?

SFBG: You take a playful approach towards video-making, especially in regards to face-paint/costuming. But are you ever afraid people will misinterpret your style as some sort of cultural appropriation? Do you think worries about “cultural appropriation” are even still relevant in this hyper-connected, global-mashup day-and-age?

MG: There have been instances where tUnE-yArDs was associated with a kind of cultural appropriation that I wasn’t cool with, such as when an artist used a Native American-style headdress on a poster for one of our shows. It wasn’t my decision, and I didn’t see the poster before it went out, but of course, there’s my band’s name on the poster, and the well-intentioned artist who didn’t think hard enough about that particular choice, and a whole bunch of offended people. However, I try to concern myself less with being politically correct and not stepping on anyone’s cultural toes, and more with righting things, in the limited ways I have to do that…

(But) yes “cultural appropriation” is an important thing to consider carefully for an artist like me…I, as a white woman with a college education and access to the world of pop music and all of its resources, have a lot of power. I can rip off not only the style but the note-for-note music of another culture, and get away quite easily without having to justify or explain that. It’s really up to me: will I use these tense moments of cultural appropriation, which I believe are inevitable in this time we live in, to draw attention to those with less power and less of a voice, or will I skirt the issue completely?

SFBG: Who are some of your favorite Oakland/Bay Area-based artists at the moment?

MG: Beep Trio is my favorite Oakland band. It is but one example of the brilliant, creative, avant-garde, jazz-influenced bands in the area. Dominique Leone and Ava Mendoza are a couple of others. Mwahaha and Kapowski are great friends of ours and great up-and-coming bands, more on the pop end of things. And V-Nasty.