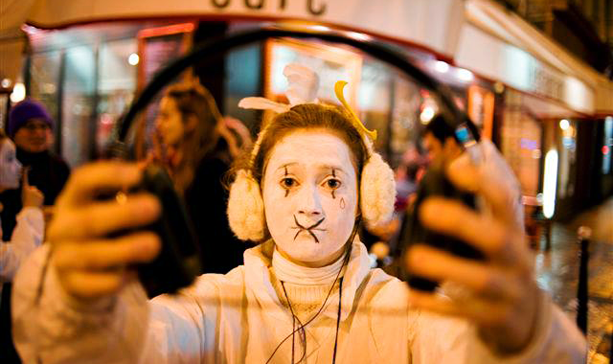 Two big nightlife things this week are true: one sad (but hopeful!) and one speechless. The speechless one involves mimes.

Yes, as the Chronicle keeps reporting, the Entertainment Commission is considering following in many European cities’ silent footsteps — perhaps against the wind, perhaps down invisible stairs, perhaps directly into a pernicious, intractable cube — and utilizing street mime troupes to neutralize rowdy nightlife crowds on the street. It is horrifying. These roving claques of pantomimers, or “nocturnal artistic intervention squads” are part of a program called Les Pierrots de la Nuit, which is something I used to say out loud in the shower while I was washing my hair to crack myself up. Now those words have taken quivering, over-gesticulating flesh and I am mortified.

But apparently, according to Paris, Barcelona, and other nexi of noisy nightlife, drawing a crowd’s attention (and, as the Chronicles gossip queen Leah Garchik cracks, possible malevolence?) drawing a crowd’s attention to sudden, engaging/enraging street theater can diffuse the tension clouds and dissipate any impending violence or escalating noise. (Mimes are also good with Venezuelan traffic.)

No word yet (lol) on the EC’s official decision, and I’ll stop beating up on mimes now because I actually revere Marcel Marceau and adore Mummenschantz. And oddly enough, there is actually a funny space for mimes in club history, from the Commedia dell’Arte traditions that inform burlesque, Vaudeville, masquerades, and Burning Man to a strange number of weeks in downtown Manhattan around 1989 when a group of young’uns went around dressed as mimes in a sort-of Clockwork Orange-y homage and attempted to overthrow the then-mouldering Club Kid establishment. So wave your arms, there you go.

Of course this is San Francisco, and we have slightly, er, different problems:

The sad but hopeful news? Tonight Thu/19 is THE FINAL DONUTS PARTY, a farewell to that wonderful, four-year-old roving nu-disco and hip house throwdown (yes, with free donuts!) as mainstay DJ Pickpocket, a.k.a. Kat Matutina moves to LA for a big job. I’m pissed that we’re not only losing another great party (like Blow Up and Kontol recently), but that we’re also losing an absolutely fabulous and gorgeous nightlife mover and shaker who did a ton to make SF the sophisticated, debaucherous nightlife center it’s become.

No fear though, because she’s going out in biggie style with performances from Ital, Mi Ami, Magic Touch, and others from the beloved dance music label of the moment, 100% Silk. Good luck, Kat — we will miss you!

“Nu-tech-disco and positivity in numbers” are the stated goals of this new “travelling seasonal party” from the the creators of uber-scrumptious Nark Magazine. Here’s the launch, lighting up your primavera, with music by Doc Sleep, Robert Jeffrey, and Nark himself, who is quite stylish and narky! This will be a good meetup for the fluorescent queer children who like to dance, like these:

***Weekend party recos, besides those in my weekly Super Ego column in the paper, coming soon — right after I take a minute to get over this hangover …. ***