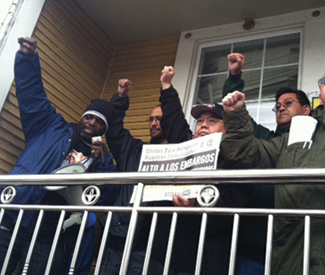 Dexter Cato has no right to be here.

He’s standing on the corner outside the house he bought in 1990. His four kids, still teenagers, grew up here. He was living here when his wife, Christina, passed away following a car accident in 2009. Next door is the house he grew up in, having spent all his life on Quesada Avenue, in the wide streets and residential friendliness of the Bayview.

Still, the bank says Cato doesn’t belong here anymore, evicting him when his home went into foreclosure in August 2010. Yet Cato and his community not only fought back and reoccupied the home last month, they have turned it into a community center and base of operations from which to fight other foreclosures in the area.

The house, at the corner of Quesada and Jenning, is draped with banners, such as “Banks: no foreclosures!” and “keep families in our homes!” In the rain on March 16, when they were unfurled on the property that has remained vacant for nearly two years, surrounded by neighbors and friends, Cato moved back in. It was a gamble and an act of civil disobedience. Now they feel festive; it’s been a month, and no one has shown up to tell Cato he has to leave.

It has become a home base for a who’s who list of “foreclosure fighters,” the name taken on by Cato and others who have, in recent months, gone to extreme means to prevent banks from foreclosing on their homes. There’s Vivian Richardson, who got her foreclosure rescinded after 1,400 emails to her loan servicer. There’s Alberto Del Rio, who was ignored and told that his paperwork was lost during a Kafka-esque two-year loan modification attempt, only to win a meeting with top Wells Fargo executives last month after Occupy Bernal got behind his cause. There’s Carolyn Gage, who took a cue from protesters downtown and occupied her Bayview home in November.

Despite the pandemic, many San Francisco residents say they felt distinctly alone in the events surrounding receiving notice of default.

“I’ve lived in Noe Valley since 1972,” said Kathy Galvess, an activist we spoke to Cato’s basement. “I didn’t know anybody who had been foreclosed on.”

When she got her eviction notice and, hooking up with ACCE and Occupy Bernal, faced her situation and the extent of the crisis, she wondered if her neighbors knew something she didn’t.

“I asked around the neighborhood, no one had any idea,” she said. “That’s how the banks get away with it. We suffer in silence.”

Carolyn Gage echoed that sentiment. “A while ago, foreclosure was shameful. But now it shouldn’t be. It’s happening in a systemic way, so people are getting over that shame,” she told me and several neighbors March 24 during a barbecue at Cato’s house.

This shame came in part from the illusion that the onslaught of seemingly affordable home loans from the housing bubble’s height were, in fact, affordable.

“The easy money fueled the ability for people to refinance every one or two years. A lot of people did that and just lived on it. Certain people used it, some abused it, others got caught up in it,” said CJ Holmes, a real estate broker in Santa Rosa who became interested in understanding the meanings of the crisis when the value of property she owned plummeted in 2008.

While President Bush signed on to Troubled Asset Relief Program (TARP) in 2008, and bailouts to Fannie Mae and Freddie Mac continued to roll out well into the Obama presidency, foreclosures were steadily clearing San Francisco of longtime residents, not to mention property tax and home values on foreclosure-stricken blocks.

There were advocates working on the behalf of those getting evicted. The Alliance of Californians for Community Empowerment looked into cases and worked to discern the complex chain of entitlement, talk to the right people, and try to get loans modified. HUD-certified organizations like the Mission Economic Development Agency (MEDA) and the San Francisco Housing Development Corporation (SFHDC) counseled homeowners and waded through paperwork.

“The modification process takes an average of 12 months to complete,” said Jose Luis Rodriguez, a foreclosure counselor with MEDA, in an email. The loan modification process can make or break a homeowners chances of keeping their home, leaving them in what he called “purgatory.”

Assessor-Recorder Phil Ting later concluded that in 84 percent of foreclosure cases, there was some kind of faulty paperwork.

“We’d fax documents to banks and they would habitually lose documents. We’d have to fax them sometimes up to 10 times,” said Jonathan Segarra, director of communications for MEDA.

Alberto Del Rio had the same issue. During his loan modification struggle, “we kept having to sign up for a new case,” Del Rio told me. “About every three months. Generally because they lost paperwork, or paperwork wasn’t properly transmitted.”

“There was no callback on their part,” he said. “We would have to call to get updates and they would say: oh, it’s closed, you have to start over with the paperwork now.”

But this lost paperwork epidemic, an emblem of the carelessness that ran rampant through the mad expansion of the subprime mortgage industry, has more than one face. It is likely due to lost paperwork, for example, that Cato has been living in the home that is, technically, no longer his.

No one seems to have the title.

At the time of sale, it was owned by Wells Fargo. According to transaction records, the foreclosure is being serviced by American Home Mortgage Servicers; they get a portion of the money, but do not own it. According to Wells Fargo representatives, that bank is now the trustee of the mortgage, also known as the beneficiary.

ACCE has claimed that Wells Fargo “sold the house back to itself,” and that American Home Mortgage Services, the company currently servicing the loan, is a subsidiary of Wells Fargo. Ruben Pulido, a Wells Fargo spokesperson, denies this.

But Martinez believes that “they’re different entities in that they work separately, but they’re the main servicer for Wells Fargo, they only service for Wells Fargo.”

Last fall, as an angry mass suddenly emerged from the American public, cries of “banks got bailed out, we got sold out” rang through the streets. Occupy Bernal and ACCE have had success in the city government, gaining support from Sups David Campos and John Avalos, who represent some of the hardest hit districts, helping facilitate meetings between Wells Fargo representatives and homeowners with foreclosure horror stories, with some success.

Activists also went for more civil disobedience-style tactics. These were on display Feb. 22, when dozens of supporters showed up at Monica Kenney’s Excelsior home. Kenney was in the midst of dealing with a foreclosure that didn’t seem right. She had received a forbearance agreement and made the first payment on it June 27, then was surprised to learn that, June 28, her house had been sold at auction.

“At this point I wrote Wells Fargo and I said, I have this paperwork, and I want you to honor it and rescind the foreclosure,” Kenney explained when she came to speak with us at the Guardian offices. She gave us copies of the forbearance agreement.

“Their response was, we did nothing wrong and the foreclosure will stand,” she said. “So at that point I decided I would fight to retain my home.”

After dishing out most of her savings in a lawsuit and eviction stays, the fight looked grim, and her house was slated for eviction. The plan — the last line of defense — was to simply bring as many people as possible to Kenney’s home and hope they could fend off eviction. Kenney remembers her nerves, huddled up that cold morning with veteran foreclosure fighter Vivian Richardson, worried that no one would show up.

“Then, at six in the morning, I had foreclosure fighters, neighbors, friends, Occupy Bernal, Occupy folks period, they just started showing up at the house, and just sat down, hunkered down with me and said, we’ll do whatever we can to at least dissuade the sheriff,” she recalls

It worked. And it hasn’t stopped working. Many people who have joined with Occupy Bernal and ACCE are still in their homes thanks to everything from lobbying politicians to civil disobedience. Some were evicted despite the protest movement’s best efforts but, thanks to newfound community, they avoided homelessness.

Kathy Galvess wasn’t able to keep her home, but her experience was made much more pleasant by Occupy Bernal. “Stardust got the moving truck and helped me move, out of the goodness of his heart,” she told me. “And if it wasn’t for Vivian, me and my sister would be wandering the streets in these storms we’ve been having.”

It’s that community, it’s that tireless work, it’s that victory in the midst of a sea of ongoing challenges that was celebrated at the barbecue at Cato’s house. It’s hard to know the future of the occupied home. The goal of the coalition supporting it was to keep it until April 24, the day of a Wells Fargo shareholders meeting that a large coalition of advocates are determined to shut down.

But for now, the place has become a community center and a symbol of hope and defiance. Politicians have certainly taken note. The Board of Supervisors passed a resolution last week urging banks to suspend foreclosures in San Francisco.

“It’s great,” Cato said. “That’s what the house is useful for right now. Everyone’s coming in and asking, how can we be a part of this, how can we help.”