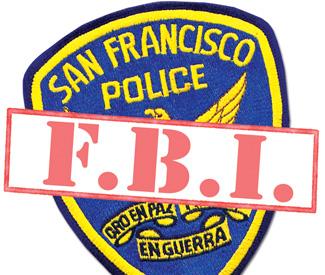 Mayor Ed Lee yesterday vetoed legislation that would have banned San Francisco Police Department officers working with the FBI from conducting covert surveillance on law-abiding citizens. Not terrorists, not criminals, not foreign spies, but people like you (well, people like you who are Muslim, protesters, visitors to certain websites, or people who otherwise have caught the attention of the FBI) who are not even suspected of criminal activity.

While Lee says he will support a so-called “consensus ordinance” introduced yesterday by Sup. Jane Kim, the sponsor of the vetoed measure, his veto letter makes clear that he wants San Francisco to reserve the right to spy on whoever the FBI wants to, echoing post-9/11 fear-mongering and right-wing bait-and-switch tactics while still trying to placate civil libertarians with his rhetoric.

“This ordinance intends to amend the Administrative code to require the San Francisco Police Department to either terminate a counterterrorism Memorandum of Understanding with the Federal Bureau of Investigation or materially restrict the interaction between the two law enforcement bodies,” his veto letter begins.

That MOU with the FBI is the one that the SFPD secretly entered into back in 2007 (which was exposed last year by the American Civil Liberties Union after a long public records court battle) that placed SFPD officers under FBI control without recognizing state and local privacy and civil rights restrictions. The resulting scandal caused the SFPD to apologize and work with the Police Commission on a general order clarifying that local officers must obey those restrictions, which Lee, Police Chief Greg Suhr, and some supervisors have maintained is good enough.

But six members of the Board of Supervisors didn’t agree with this “trust us” approach, noting that future chiefs and Police Commissioners can change the policy at any time, and saying protecting the privacy and civil rights of city residents and visitors is an important enough issue to be formally codified in local law.

John Crew, the police practices expert for the ACLU, has said that the only reason to oppose the ordinance is if officials want to reserve the right to spy on law-abiding citizens, and Lee seemed to signal as much by writing “the restrictions it places on our Police Department overly constrain their ability to protect our City from very real threats.” And he enumerated those “threats” by equating those being spied on for their political beliefs or because of their ethnicity with terrorists who want to blow us up.

“Recently, the United States Department of Homeland Security raised San Francisco’s risk rating – we are now considered the fourth-highest terrorism target risk in the nation along with cities like New York and Washington, DC. Protecting San Franciscans is the most important responsibility I have as Mayor. This goal, however, does not justify a trampling of constitutionally protected principles, and we have a government structure in place to ensure this dichotomy never materializes,” Lee wrote.

See what he did there? There was nothing in this measure that limited the FBI or SFPD’s ability to monitor suspected terrorists, which they’re already free to broadly define, particularly since 9/11 and the USA Patriot Act and other police state changes, including the very creation of the Orwellian-named Department of Homeland Security. But civil libertarians have been trying to hold the line and prevent the FBI – which has a long and sordid history of spying on law-abiding citizens and using that intel for political sabotage – from going after anyone who looks different or criticizes this country’s leaders or policies.

It’s great that Lee, who was a civil rights attorney decades ago, gives lip service to that concern and says he’s willing to work with the Coalition for a Safe San Francisco on legislation that would allow a hearing by the Police Commission of any future JOAs with the FBI after it’s been signed. But Kim’s statement that, “It’s a compromise that essentially will accomplish the same thing” just isn’t true, as the activists who pushed this tell us. The vetoed measure was already a compromise, with Kim making many amendments at the request of Suhr and repeatedly delaying final consideration of the measure so any other concerns could be addressed.

The JOA should have been suspended and rewritten, as the city of Portland, Oregon did when these same concerns were raised there, with no detriment to its relationship with the FBI. But even that request to suspend our JOA had already been removed from the watered down ordinance that Lee vetoed. “When we work together to create solutions that represent our shared values, we make San Francisco a safer, better City together,” Lee piously wrote, glossing over his unwillingness to work with the coalition before vetoing the measure. “He won’t even meet with civil rights groups on this,” Crew told me last week, as the Coalition was trying to talk with Lee to head off a veto.

Activists like Shahid Buttar, executive director of Bill of Rights Defense Committee and a member of the Coalition, are trying to look on the bright side and they say they’re happy that Lee now wants to work with activists on the issue. But the compromise and consensus are what’s been happening over the last several months – now, it’s simply Lee bowing to the SFPD rather than trying to regulate it and trying to save face on a bad veto.

As Buttar told us, “It’s disappointing that Mayor Lee would choose to overrule the voice of residents of the city and their representatives on the Board of Supervisors.”