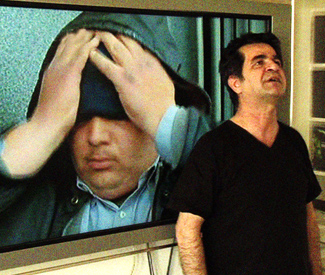 FILM Jafar Panahi is no longer allowed to make films in Iran. So, with the help of documentarian Mojtaba Mirtahmasb, he made This Is Not a Film.

After arrests in 2009 and 2010, Panahi was sentenced to a 20-year ban from filmmaking and a six-year prison term for “assembly and colluding with the intention to commit crimes against the country’s national security and propaganda against the Islamic Republic,” as reported by the Green Voice of Freedom, a human rights website. He is also barred from leaving the country or giving interviews.

This Is Not a Film, an “effort” credited to him and Mirtahmasb, was smuggled from Iran for its premiere at Cannes in 2011. Its title is an obvious provocation, and in translation a nod to Magritte’s ubiquitous painting of (not) a pipe, The Treachery of Images. Its content seems simple: Panahi eats breakfast and gets dressed in long, self-shot takes. Then, after Mirtahmasb arrives to take over the camera, he talks to his lawyer, begins to narrate and reconstruct the last film he was working on, explores memories of filmmaking, and interacts with his neighbors. The editing becomes more complex, more cinematic, and more problematic as the day progresses.

Panahi (2006’s Offside, 2000’s The Circle) is an established filmmaker, a contemporary and collaborator of the renowned Abbas Kiarostami, if slightly less internationally well-known. But as he revisits his past work on a TV in his living room, it is clear that this not-a-film is hardly his first flirtation with metanarrative experimentation. He discusses a sequence in his second film, The Mirror (1997), where the lead actress, a young child, refuses to continue participating in what — up to that point — had been a contained fictional narrative. Her character’s arm is in a cast, but she takes off the cast and walks off the set — and Panahi says he, too, must throw away his cast. This cryptic prescription for his predicament is just the first of an increasingly tortuous set of philosophical considerations he tackles.

As he proceeds to read and describe his last screenplay, which he was banned from filming, he maps out the film’s set on his carpet with tape. These shots have more than a little resonance with Charlie Kaufman’s Synecdoche, New York (2008), in which a space for creative performance is inscribed within a real, lived-in space.

In some slower and more willfully meta moments, Panahi and Mirtahmasb banter about the filmic potential of the footage they are producing. This could never be part of a film, they say, but documentation is an end in itself. And yet this isn’t pure document — it is edited, and often at strikingly emotional moments, to create cinematic effects. One beat, where Panahi halts his narration and looks suddenly overcome with frustration, is suspiciously preceded by a change of camera angle. But then, Panahi and Mirtahmasb even discuss the possibility of editing their footage, so even that aspect is a performative extension of the “documentary” content. Furthermore, the notion that Panahi is not directing is repeatedly challenged by the fact that he can’t stop telling Mirtahmasb when to cut.

But the work is not nearly as dry as all this analytical babble might imply. It is also deeply funny, in the parts where the camera follows Igi, Panahi’s daughter’s pet iguana. And then, in a startling final sequence, it becomes weirdly claustrophobic and suspenseful as Panahi joins his building’s custodian on a longish elevator ride.

There’s a cliché in criticism that certain technically accomplished movies are “pure cinema,” and in a sense, if this is not a film, it’s pure filmmaking. It presents itself as a document, but its authenticity is questionable, and for a man who is banned from filmmaking, so is its legitimacy. But it is a process in action and in dialogue with itself. It is an act of defiance, and the product of an artist’s self-effacing need to express himself. Whether or not this is a film, it is a profound artistic howl.

THIS IS NOT A FILM opens Fri/6 at SF Film Society Cinema.