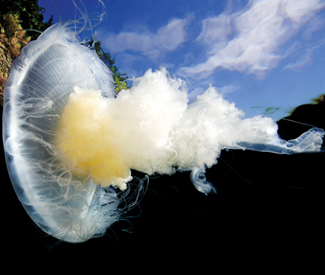 THE GREEN ISSUE Most people associate underwater photography with the tropics, but the beautiful shots that appear in Beneath Cold Seas (University of Washington, $45, 160pp) were shot in the Pacific Northwest. What’s most striking about the book is the color and vibrance that photographer David Hall was able to capture. It’s a bit mind-blowing to imagine that the hooded nudibranches and grasping octopi found in the book live in the inky depths abutting our very own rocky shores. The next time you take a dip at Baker or Muir Beach don’t forget that you’re frolicking with some seriously stunning fauna.

SFBG: Where did you shoot Beneath Cold Seas?

DAVID HALL: I shot Beneath Cold Seas in British Columbia. The water tends to be more clear and there’s less pollution because of the small population density. But the same animals in the book are found in Northern California, they don’t recognize international borders. Technically biologists say the ecosystem extends from Southern Alaska down to Point Conception (north of Santa Barbara). That entire area is referred to as the Pacific Northwest.

SFBG: What environmental issues are facing the Pacific Northwest?

DH: One problem is the introduction of alien species. For instance farm-raised salmon taken from New England genetic stock occasionally escape and interbreed with the five or six Pacific species. So you’re getting a genetic mixture which endangers the original Pacific species. But the environmental issues that most people are worried about are overfishing and pollution, like oil spills. As more Canadian oil is being developed and exported to places like China, it will have to be shipped across these waters. So that becomes a concern, especially after what happened in the Gulf of Mexico last year.

SFBG: When did you start taking photos underwater?

DH: Many years ago I took a trip to the Virgin Islands. I’d never seen a coral reef before and was completely overwhelmed by what I saw while snorkeling. I felt that I had to photograph it because I’m not so good at describing things. I went out and bought the best camera I could afford which was a Kodak Instamatic in a plastic housing with flashbulbs. That was how it all started. In those days the bar was very low, if you got an underwater photograph that was somewhat recognizable you could get it published.

SFBG: What would you say inspired this project?

DH: At first I started going because I loved the diving, I enjoyed being there and getting photographs. But after the first half dozen trips I realized that the material I was getting was good enough for a book. I got the idea for the book about five years ago, but all in all it took about 15 years.

DH: I was living on a small boat for a couple of weeks at a time, doing three dives a day, and then reviewing photos at night. The days would be consumed with getting ready for the dive, getting all the equipment on, waiting until the current was just right, getting into the water, diving for an hour, getting back to the boat, getting warm — which takes another hour or two — and then getting ready to dive again. Altogether I made about 500 dives from 1995 to 2010.

The book required getting a lot of wide angle shots to include the scenery as well as the animals. Getting good clear, colorful photographs in cold water is difficult because of visibility issues. Also cold water filters out all of the warm colors in the spectrum (red, orange, yellow) so to see the colors you have to add light back. So I dive with a pair of powerful flash units that attach to the camera by way of articulated arms that keep my hands free.

SFBG: So there wasn’t someone handling lighting for you?

DH: If I were a National Geographic contract photographer I’d probably have had a few assistants holding lights for me, but I wasn’t so lucky. I had to do everything myself. And in most cases I was diving completely alone.

SFBG: People don’t associate such colorful and exotic creatures with our coast. It’s really wonderful that your book is changing that perception.

DH: I certainly hope that’s what’s happening. The book has been very well received, largely because nobody was aware of what was down there. I mean marine biologists and divers were, but ordinary people had no idea.

People tend to protect what they know and value. Most Americans and Canadians are familiar with the aquatic species that we eat, but there’s a whole ecosystem there that the great majority of us are completely unfamiliar with. I hope my book will make people aware that these things exist and want to feel more protective toward that whole environment.