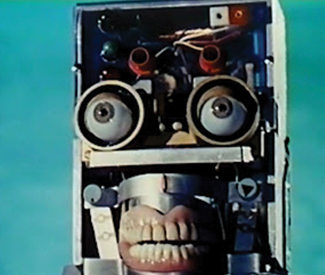 FILM Nothing dates faster than yesterday’s futurism. Yet particularly at a moment when half the country seems bent on ordering us back to the past — a past that might variably be identified as the Victorian era, the Inquisition, and the Dark Ages — there is something comforting in revisiting old visions of the future. For the next seven Thursdays the Vortex Room boldly goes a few places you’ve probably been before, several that earn brownie points for foreknowledge, and others that separate the sci-fi nerd from the sci-fi mega scholar.

The familiar titles are still on the cultish side, like the intentional-camp nirvana created by a double bill of 1980’s Flash Gordon and 1968’s Barbarella. Likewise on the spoofy side is John Carpenter’s 1974 feature debut, Dark Star. Also fairly famous is horror specialist Mario Bava’s 1965 Planet of the Vampires, a gorgeous color nightmare.

But the rest of the “Starship Vortex” series dwells in forgotten netherworlds of cosmic fantasy from the advanced minds of Italian and Danish exploitationists, as well as Communist bloc filmmakers with higher budgets and less strictly-commercial aims. The sole all-Yank effort here is also the earliest, 1961’s endearing The Phantom Planet, whose brave new universe of 1980 finds an ever-belligerent Ugly American astronaut stranded among Lilliputians (who shrink him down to their size — the nerve!), whose females fight over this rugged lunk. The assertively bad acting, quaint FX, heavy (and heavy-handed) religious-philosophical overtones, dorky monster, and credit for “Electronic Space Equipment by Space Age Rentals” make this a classic of black and white sci-fi silliness.

On the other side of the Iron Curtain, however, people were taking space exploration very seriously — and no wonder, since the films were state funded, and the U.S.S.R.’s space program was one indisputable success in which (for a while) it even outpaced the West. Typically earnest was 1963’s Czech Voyage to the End of the Universe. Satellite “town” Ikaria XB-1 and its 40 inhabitants are liberated from Earth orbit and sent to the closest star outside our solar system. There’s much attention to interpersonal relationships (as well as scantily clad gymnastics in the exercise lounge — hey, fitness is important), and despite desultory suspense around radiation exposure, our interplanetary future ultimately looks bright.

Interestingly, an assumption shared by nearly all the features here is that any future enemies we faced would be from “out there.” The inevitable sprinkling of jerks aside, humanity would have long since been joined in peace and prosperity by a one-government body à la the United Nations. Try floating that concept now.

In the Me Decade and after even Socialist sci-fi lightened up, discounting the thesis statements made by Tarkovsky and his ilk. The East German-Romanian In the Dust of the Stars (1976) is a fair riot of silliness as Earth voyagers sample the high life on Tem 4 — interpretive dancing, flavored inhalers, snakes slithering around party smorgasbords — until our heroes discover the planet’s secret slave underbelly, prompting revolutionary class struggle. Just a bit more sober is 1981’s Soviet To the Stars by Hard Ways, in which an ethereal sole survivor is found on an alien spaceship and brought to Earth, then taken back to save her home planet from death by industrial pollution. It’s a rare post-1977 sci-fi film not influenced by Star Wars, which was imitated more shamelessly the further you went down the exploitation-cinema tunnel — at least by anyone not using 1979’s Alien as their model. Italy, second only to the U.S. as the drive-in era’s international trash exporter, ground out countless grade-C space operas like 1979’s Star Odyssey (featuring such spectacular budget-sparing action as two people using their minds to open a door); even Star Pilot, originally shot in 1966, was retitled, re-edited with footage “borrowed” from other movies, and re-released in the U.S. 11 years later to cash in on George Lucas’ bonanza.

Nothing, however, will ever equal the plagiaristic zeal of 1982’s The Man Who Saved the World, a.k.a. Turkish Star Wars, which took full advantage of Turkey’s disinterest in copyright law to slap together an unforgettable contraption combining acres of actual Star Wars footage, other stolen elements, and new scenes putting a distinctive bargain-basement regional spin on the whole affair. Gauze too expensive for your zombie-mummies? Use toilet paper!

If you haven’t overdosed on “futuristic” pastel track suits or annoying comedy robots yet, elsewhere in the Vortex series there’s the relatively big budget 1969 British Journey to the Far Side of the Sun, a “parallel planet” tale at its best when flaunting the obvious influence of the prior year’s psychedelic “trip” sequence in 2001: A Space Odyssey. Way down the production-values scale, 1967 European co-production Mission Stardust features then-hot Swedish sexpot Essy Persson, who utters the line “Those robot creatures are great tailors, but they haven’t a clue how to put buttons on.” Denmark’s 1961 English-language Journey to the Seventh Planet adheres to the lava-lamp school of color design in portraying astronauts under mind control that materializes their thoughts — all of which seem to run toward pin-up girls (including a former Miss Denmark!) in lingerie.