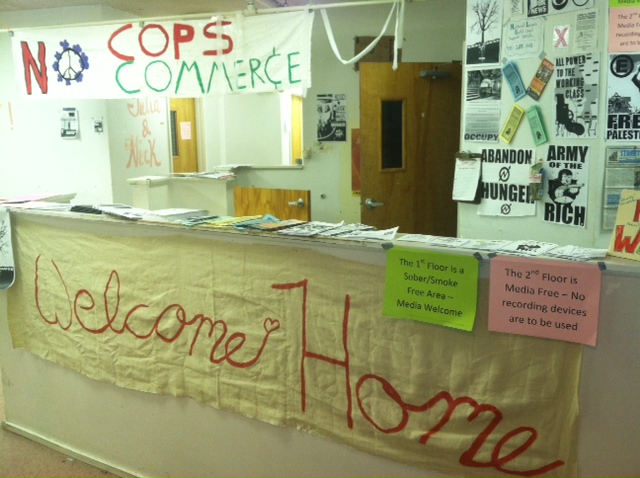 UPDATE 1:15 PM: Without warning or an order to disperse, riot police arriving by bus suddenly raided the building moments ago, making more than a dozen arrests so far. More soon as the story develops.

Editor’s Note: Guardian staff writer Yael Chanoff reports from the inside of vacant building that Occupy SF has taken over in hopes of creating a community center.

The inside is mainly filled with people organizing, exchanging ideas, and e-mailing and calling contacts from around the city who may be able to provide assistance for the effort. Many are coordinating for a meeting with the Catholic Archdiocese – which owns this former mental health clinic at 888 Turk Street – that is scheduled to take place this afternoon. A delegation from the Interfaith Council of San Francisco and the National Lawyers Guild are also on their way to building to help plan for the meeting.

A head count last night showed there were about 125 people here. Some have left, but many arrived this morning, leaving about 100 at this point. Various rooms in the building have been organized for different purposes including a welcome desk and information center, sleeping quarters, library, and medical clinic.

Last night, it was a relaxed party atmosphere with groups in every room expressing ideas for the community center and employing strategies for keeping the space. Graffiti art and messages were painted in hallways, a free hot meal was served, and people mostly respected designated composting, recycling, and trash bins. The commune received at least five deliveries of donated pizza.

By 7 am today, occupiers were sweeping, scrubbing and picking up stray trash, as well as painting over most of the message on the walls with white paint. The police are holding a partial line, with barricades blocking the sidewalk on two sides of Gough and Turk streets, and officers are attempting to prevent people from entering the building.

However, they have not blocked off the street and many people have entered by riding up to the entrance in bikes, cars, or simply walking past police. Deliveries of supplies this morning includes breakfast of cereal, milk, coffee and fruit; as well as mattresses and warming clothing.

About 20 people are sitting outside the building in the sun blasting KPOO radio, which made an announcement on air a few minutes ago that it is the soundtrack of the SF Commune. There is a tent set up on the roof, and a group up there doing a coordinated dance number.

There is a general assembly meeting set for 6 pm and most occupiers are hopeful that there won’t be a police raid before then.