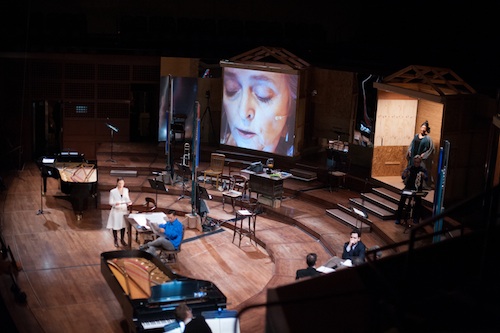 “The best form of government … is no government at all!” announced singer Meredith Monk in the second program of the SF Symphony’s rollicking American Mavericks festival at Davies Hall on Sat., March 10, her trademark braided pigtails and Shuffling Elf gait in full effect. And while I could hear the pleated pants of several libertarians around me surely being wetted (and a few liberal feathers ruffling in the back), this was no mere Ron Paul back-pat, though it was delivered with all the empty bluster we’ve come to expect from the current campaign season.

We were in the midst of an astonishing presentation of John Cage’s epic, random Song Books from 1970, after all — revered experimental vocalist Joan La Barbara had delivered a beribboned gift of apples or cranberries to an arbitrary audience member, magnificent diva Jessye Norman (in a stunning Issey Miyake gown) had joined in a boisterous card game and typed a letter on a mic’d typewriter, and conductor Michael Tilson Thomas had chopped up various fruits and veggies and Cuisinarted them into an orange-y beverage for the pianist. Cage, our 20th Century channeler of chance, would never allow such an inflexible utterance to stand unchallenged.

Sure enough, the phrase began to dissolve in Monk’s mouth as she repeated it, leaning from the stage like a satiric demagogue: “The b-best f-f-f-form of-f-f-f g-g-g …. ,” and adding “And we shall have it, when we are ready for it!” All the while, three large black flags were being hoisted on neon polls, unfurling into the wind from three fans, ghastly pennants at a flourescent funeral. No, we were not just in the land (our land) of anti-government sloganeering, mouthed by Tea Partiers, Occupiers, and hedge fund profiteers alike. With Monk as our guide, we were slipping through the black flags of anarchy into a gaudier lawlessness, that of death. And like pure music death, of course, shall have no dominion.

We’ll probably not see such a lavish, loving tribute to Cage’s aleatory masterwork for a long time. The randomness-conjuring Song Books are governed, in a somewhat oxymoronic twist, by a large set of instructions — “Leave the stage by going up (flying) or by going down through a trap door. Return in the same way wearing an animal’s head,” for example — and forego traditional musical notation and expression for doodlings, drawings, charts, projections, lighting effects, electronic improvisation, bird calls, horn squonks, chess games, and a plethora of intersecting stage actions. (That’s not to say there weren’t gorgeous passages of melody — one especially near the end, a meandering duet with electronics in which Norman sang in a wistful voice about, I think, purple finches.)

That all this potential chaos not only didn’t come off as pretentious avant-gardism but actually formed something deeply touching, hilarious, human, and even quaint was a triumph for director Yuval Sharon and his cast and crew. Only one dude stormed out — perhaps to towel his pleats.

Bracingly, the American Mavericks festival — MTT’s tribute to the barbaric yawp of the American musical spirit — has retained most of the wonder, if not all of the risk, of its first installment a dozen years ago.

Things had kicked off in splendid form on Thu., March 8, with program one — I saw the repeat performance that Friday — including an exciting and lush presentation of quintessential American composer Aaron Copland’s “Orchestral Variations” from 1967, which delivered both ethereal, avant-garde jaggedness (the piece is composed of 20 variations on a four-note “cell,” in an atonal manner) and occasional glimpses of Copland’s generous, down-home spirit (this was the composer of “Appalachian Spring” and “Rodeo,” after all).

It also gave us a bit of dish.

In researching “Orchestral Variations,” I’d run into some trouble — I kept finding more evidence of Copland’s “Piano Variations” from 1930, a work deemed so stark and forbidding that no professional pianist would debut it. (So Copland, in a nifty show of self-confidence, played the premiere himself, to many critics’ disdain.) Here’s a version by pianist Marc-Andre Hamelin:

But what of the piano work’s expansive, full-bodied and spirited transcription for orchestra? It turns out that MTT himself had, in a visit to Copland’s home decades ago, suggested the piece be transformed from a single piano piece to an orchestral work, in order to reach more people on a different scale. “He turned to me, raised an eyebrow, and said, ‘Yes, yes, that all sounds nice — but who’s going to do all that work?'” MTT told the audience during the introduction. Then the big reveal: “And I said, ‘Well, with your permission …’ So — here’s a little thing that we do.”

Insider-y! It was a rare treat of a rare performance of a rare masterwork, from one of the major players involved.

It was also the perfect lead-in to the next piece on the program, Lou Harrison’s “Concerto for Organ with Percussion Orchestra” from 1972, in an absolutely transcendent rendition from Paul Jacobs on the enormous Davies Hall organ, with an ensemble of super-agile Symphony percussionists playing everything from Chinese crash cymbals and huge muted prayer gongs to celesta, rasp, and glockenspiel.

Previously I had a slight aversion to Harrison — while I appreciate him as an out-and-proud gay man in the 1960s (he has a kind of Burl Ives meets Harry Hay aura in queer iconography), I sometimes felt his musical project suffered from the same knee-jerk Orientalism that turns me off of a lot of famous Bay Area poets, mystics, artists, and composers who attempt “East meets West.” Hairy legs jutting from a silk kimono, shudder.

My prejudices were quickly dispatched when the sprightly Jacobs immediately began coaxing the most amazingly powerful sounds from the organ, using a block-muffle tool to play whole ranges of keys at once in various rapid-fire combinations and agglomerations, accompanied by the percussionists’ clanging, hypnotically abstract tattoos. Movements ranged from crepuscular tootling to sci-fi bombast as Harrison ushered us into a kind of hallucinatory meditation full of bright oranges and shooting blues, neither East nor West but a cosmic recombinant being of both. I want to rediscover this formidable magician. Here’s a taste from another recording, although I found Jacobs’ playing to be even more spirited:

Harrisons counterpart on program two was Henry Cowell, the great popularizer of tone clusters (think of playing a whole bunch of clashing yet somehow wondrous-sounding notes at once) — Cowell’s “Piano Concerto“ of 1928, performed by Jeremy Denk with the orchestra, was a sensation to almost equal the Cage before it. You would never have thought odd cacophany could achieve such nuance. It sounded like a foray into negative beauty. Denk was using his entire forearms on the piano most of the time, with the symphony meeting him at a level of intense energy and empathy, and yet there were moments of quiet, complex reflection and runs of exhilirating virtuosity that matched the height of the redwoods in Henry Cowell state park (no relation, except metaphorically). Am I gushing? I am gushing. More Cowell everywhere, please. And as for the multi-talented Denk, check out his recent, revealing, and witty essay and podcast from the New Yorker.

Preceding Cowell on program two was Lukas Foss’ fantastic 1967 Phorion, given a perfectly out-there rendition by the Symphony, which feeds ragtag bits of the famed solo violin prelude to Bach’s “Partita in E” (phorion is Greek for borrow or steal) through a phtasmagorical wood-chipper of various twists and inversions that spews forth everything from droopy jazz-surrealism to hard-driving, proto-techno minimalism. It’s a monument of sampling avant la lettre, sure to prick up any iPod-shufflers ears.

There were two slight fizzles on both nights, to my ear. Program one concluded with Charles Ives’ “A Conchord Symphony“ reconfigured, perhaps more accurately “massaged,” from other Ives works, (including his brilliant “Concord Sonata,” from around 1916) by comtemporary Canadian composer Henry Brandt. The piece — craggy, magniloquent, full of profound philosophical and unfettered musical ideas — is partly meant to invoke New England and its literary heroes, and in recordings is an excellent rush of jigging melody lines and bracing moods. Goatish, devoted, unabashedly intellectual, Ives is the spiritual godfather of American musical mavericks (and Mavericks), and MTT is one of his great champions. So I expected much. Here’s the Symphony’s recorded version:

But after the first two luminous movements the orchestra sounded a bit ragged (understandable in the face of the huge Mavericks project), the work lost some shape, and we ended up getting more a series of declarative statements than a metaphysical journey through the East Coast of the mind. (The great game of “Concord” is to see how many times Ives references those famous mortal knocks that open Beethoven’s Fifth Symphony, which is kinda fun.) At the end we’re supposed to be soul-hiking under the wheeling stars with Thoreau, but it felt more like soaking in a hot tub with the Sidewalk Guru from “Doonesbury” and a glass of good champagne.

Carl Ruggles’ “Sun-treader“ of 1926-31 concluded program two, and tapped into a strident strain of deliberative machismo and sci-fi nerdiness that brought to mind none other than Newt Gingrich, of all people. Cosmic bombast is the aim of this 13-minute brass-churning blast, a fanfare to Big Idea perserverance. It came off as dude music in the extreme, which may have perked up some of the unwilling husbands in the house, but after all that came before seemed a wee bit threadbare in its unrelenting bravado. Still, it cut a bold, bronze shape in the quivering air.