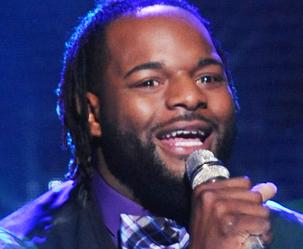 Damn, I’m a day late here, sorry: All this fuss over the sheriff of San Francisco has taken me away from my sacred American Idol responsibilities. But Vivian has been on the case for me, and I caught most of the March 14 show and Viv watched March 15, so I’ve got the scoop, which goes like this:

What is up with AI kicking off a really cool guy with a great voice who had a couple of really stupid warrants out for giving a false name to a cop — in New Jersey? Seriously — and interrogating him on the air? This isn’t Judge Judy, dudes; bad, bad form.

But we solider on, minus Jermaine Jones, to the next round, where everyone has to sing a song from the year they were born, which also allows us all to watch pretty inane baby videos and hear proud parents say insightful things like “she was always a handful.” Not the best night of performances; actually, pretty bad all around.

J-Lo is wearing a yellow top that makes her look like a banana. Randy has a red jacket and a polka-dot shirt (huh?) Steven’s in a hippie hat, shirt open so we can see his non-hairy chest and his disco chains.

Phillip has a kidney stone, which we have to hear all about, but the surgery was successful (whew!) and he was able to do a fairly tolerable “Hard to Handle.” Jessica, who is one of my faves, wearing heels so high she looks like she’s on stilts, does “Turn the Beat Around,” decent, but not her best song. Wil.i.am is giving them backstage advice, and so far most of it sucks.

Heejun asks Wil.i.am for Fergie’s phone number, then says he loves his girlfriend most, but that Fergie and J-Lo are close behind. “Right Here Waiting” is entirely the wrong song (thanks, coaches) done the wrong way but I don’t care — he’s still Number One.

Elise has a cool voice, and fucks up “Let’s Stay Together,” but pulls it back in by the finish. Deandre has the worst child video — he’s in a red suit singing “76 Trombones” — and his version of “Endless Love” is boring.

Shannon — she of the “hot, humid and happening” — tries Mariah Carey. No. The judges loved it but Viv and I said: Train wreck.

Colton. “Broken Heart.” Does a good job with a really bad song.

Erika. Going a long way in this show, she’s one of the best. “Heaven.” We liked it more than the judges did.

Skyer. Such a redneck that she wears pistol earrings. “Love Sneakin’ Up On You.” She rocks Bonnie Raitt with a country twist; on of the best of a bad night.

Joshua. “When A Man Loves A Woman.” Now we’re talking American Idol — the guy’s amazing, the AI moment of the week, J-Lo is so excited that she blurts out “that was the best thing I’ve ever heard on American Idol.” Sorry Scotty. Steven: “You gave it so big that God came through your eyes.” I’m not even going there.

Hollie. Celine Dion. Continuing the terrible song selection, but she can sing.

Too late for a spoiler — Shannon’s gone home.