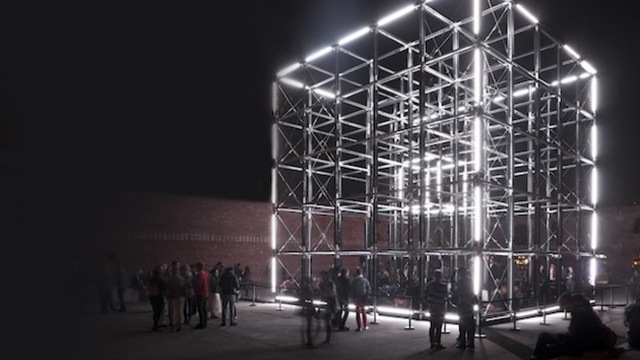 As most know by now, there’s been an email circulating about a massive free event in San Francisco all weekend with art, tech workshops, food, and live sets by the Yeah Yeahs Yeahs, James Murphy, HEALTH, Teen Daze, Zola Jesus, and more. The catch: to attend the Saturday Creators Project gathering (the day when all those epic bands play), you had to win a virtual lottery, by RSVP-ing and rolling the e-dice.

Most of those with the lucky RSVP have now been notified (as one friend put it: “I got one! I feel like I’m going to Willy Wonka’s Chocolate Factory!”) but fear not everyone else, Hosi Simon, GM of VICE, says more will be dispersed Friday (though RSVP-ing is now closed).

For those who got the winning Wonka email, those still waiting to hear, or everyone else who is perfectly fine just checking out the art+technology on Friday or Sunday – no ticket needed those days –  Simon offered up some pointers on what to look out for, and answered a few additional burning questions:

SFBG Okay, what should attendees check out?
Hosi Simon  Most important, the first one is UVA and Scanner’s piece, “Origin.” The instillation is opening tomorrow night [and is] open through Sunday. It’s the perfect place for a romantic walk – I’ve tried it and it worked in New York. It’s the massive 40×40 foot light instillation that was started at Coachella 2011 and we traveled with it country to country. These steel cubes in different formations have developed.

Secondly, we encourage people to check out all the local artists, born and bred in San Francisco. Casey Reas is doing a workshop that teaches people how to use programming – it’s a super fun thing for people to get involved with. And Chris Milk is debuting his new interactive instillation, “The Treachery of Sanctuary” –  he went to school in San Francisco and did the “Wilderness Downtown” video for  Arcade Fire [“We Used To Wait”], you know?

Third, the legendary Squarepusher will be playing brand new music from his new record coming out in May.

Fourth – it will turn into an epic marathon. On average people stay for about 10 hours – [for] films, panels, workshops, bands. Be prepared to be tired and overwhelmed. Pretty much everything is inside. Eat, hydrate, do some stretching exercises.

Fifth, If you weren’t able to get a ticket in the lottery for Saturday, Sunday is totally open, you don’t need a ticket. All the artwork including David Bowie’s will still be open Sunday and there will be panels.

SFBG How many tickets did you give away? Why the lottery system?
HS We will be giving away about 12,000 tickets. We’ll give away another quarter of those tickets on Friday. We’ve labored with this, we feel it’s the fairest way to guarantee entry.

The main thing is we don’t want to charge and want to make [tickets] as available as possible. There’s no perfect system for anything. We started as an industry party in New York, and we’ve [since] pushed it as a democratic cultural project. We want it to be open to as many people as we can.

SFBG When did that first New York party happen?
HS The first one was June 2010. It’s gone to seven [Creators Project events] in 2010, nine in 2011, and there will be seven or eight  in 2012 –  São Paulo, Bejing, Paris, New York. This is our first time in San Francisco, we’ve always wanted to bring it here. And a lot of the artworks [created here] will travel to all the stops around the world.