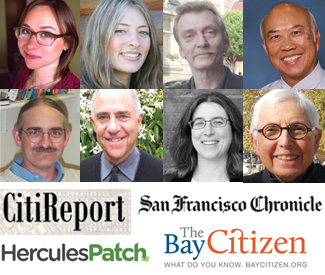 The Society of Professional Journalists, Northern California chapter, will honor champions of the First Amendment at the 27th annual James Madison Awards Banquet on Thursday, March 15, at the City Club of San Francisco.

William Bennett Turner, who has spent his career defending the First Amendment and civil rights, as well as 25 years teaching new generations of journalists and attorneys, is to receive this year’s Norwin Yoffie Award for Career Achievement from the Society of Professional Journalists, Northern California Chapter.

Turner heads a list of a dozen recipients of the James Madison Awards that SPJ NorCal presents annually to champions of the First Amendment and freedom of information.

In his legendary career, Turner has argued three cases before the U.S. Supreme Court, two on First Amendment rights, published more than 40 law review articles and taught First Amendment law at the University of California, Berkeley, for 25 years. He was instrumental in overhauling conditions in the Texas prison system and in 2011 he published the critically-acclaimed book, Figures of Speech: First Amendment Heroes and Villains.

The Yoffie award is named for one of the founders of SPJ NorCal’s Freedom of Information Committee, who as an editor and publisher of the then-family-owned Marin Independent-Journal was a vigorous advocate for transparency and accountability in the public-services sector. Other honorees are:

– Roger Woo, a teacher at Tokay High School in Lodi, California, has forged a strong reputation for quality teaching over decades of instruction. He has seen the work of his students recognized hundreds of times for stories, photos and layout. And in the words of a former student, now a newspaper publisher, Woo taught ethics, pride, and professionalism. Woo will be honored with the Beverly Kees Educator Award, named for a late, former SPJ NorCal president who was an educator and nationally recognized journalist.

– Attorney Cindy Cohn, legal director of the Electronic Frontier Foundation, will receive the Legal Counsel award for her litigation and oversight of countless significant First Amendment and open government cases. She is currently challenging the National Security Agency for alleged spying on the communications of Americans.

– Erin Siegal is being honored in the Author category for her investigation of human rights abuses in Guatemala’s adoption industry, as well as the U.S. government’s role, in which children have been stolen, sold, and offered as orphans to well-intentioned Western parents. Her book, Finding Fernanda, has received wide acclaim.

– The Hercules Patch, the local news site operated by America Online, receives the News Media award for its dogged tracking of the questionable financial management practices in the East Bay city of Hercules. Patch produced more than 13 investigative stories and 100 daily stories, and created 20 databases to follow the money.

– The San Francisco Chronicle, also will be honored in the News Media category for keeping a spotlight on the aftermath of the deadly PG&E natural gas line explosion and fire in San Bruno. The Chronicle’s persistence on the story kept readers abreast of the political fallout, the bureaucratic failings, and reform measures meant to prevent another such disaster.

– Tim Redmond, executive editor of The San Francisco Bay Guardian, receives the Professional Journalist award for his investigation of state agencies’ legally questionable acquisitions of a drug used for lethal injections that is no longer produced in the United States.

– Patrick Monette-Shaw, this year’s Advocacy award recipient, spent nearly two years following a crooked money trail to expose mishandling of millions of dollars at San Francisco’s Laguna Honda Hospital. The scandal he reported in the Westside Observer and his examiner.com articles led to an investigation of the city controller’s Whistleblower program.

– Susie Cagle, a cartoonist and journalist, has earned this year’s Cartoonist Award for her dedicated reporting on Occupy Oakland and for portraying the confrontation through her art. Additionally, she stood up for the rights of all journalists after being arrested at an Occupy Oakland rally that turned violent.

– Citireport.com, produced by Larry Bush, gets the accolade in the Community Media category for shining a bright light not only on San Francisco government but also on the city’s Byzantine political world. Bush, as editor and publisher, has spent nearly 30 years fighting to keep city government publicly accountable.

– Allen Grossman is the recipient of this year’s Citizen award for his efforts over the past several years to advance open government at San Francisco City Hall, whether by prodding the city’s Sunshine Ordinance Task Force to hold agencies and public officials accountable or by prying loose disclosable records that Ethics Commission staff aides wanted to withhold.

– The Bay Citizen, which put campaign finance data to good use, is to receive the Computer-Assisted Reporting award for its detailed political database on the San Francisco mayor’s race in 2011. The Bay Citizen made it easy to track contributions of every stripe. In addition, The Bay Citizen’s use of police records and public input has produced a highly interactive chart of bicycle accidents, letting riders pinpoint the most dangerous routes in the city.

The James Madison Freedom of Information Awards is named for the creative force behind the First Amendment and honors local journalists, organizations, public officials, and private citizens who have fought for public access to government meetings and records and promoted the public’s right to know and freedom of expression. Award winners are selected by SPJ NorCal’s Freedom of Information Committee.