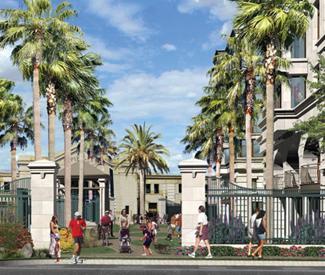 The developers of the 8 Washington project, who have already spent a sizable sum of money on legal, lobbying and prep work, have run into another setback: The March 8 hearing on the project’s shadow impacts has been postponed because of a missing public notice.

The joint meeting was set to consider the impact of shadows the project would cast on nearby Sue Bierman Park and to consider allowing increased shading. That approval is necessary before the project can move forward.

The problems with the public notice were brought to light by Zane Gresham, a lawyer with Morrison and Foerster who often represents developers. In a March 5 letter (PDF) to the two commission presidents, Gresham pointed out that the hearing notice describes the lot on Washington Street, where the project will be constructed, but never mentions the location of the park that will be shadowed.

“The notice misleads the public as to what lots would be affected by the proposed action and fails to disclose to the public the subject of the action to be considered,” the letter stated. “Because the instant hearing notice does not meet minimum legal standards, we respectfully request that no action be taken.”

Avery said that letter sparked a review of the entire notice, and city staffers discovered that it wasn’t properly posted. It also apparently fails to describe fully the action that the two commissions would take: they would to amend the acceptable shadow levels for the park, and then vote to apply those amendments to the 8 Washington development. Only the first type of action is mentioned in the paperwork.

It’s not clear who made the mistakes with the notices — but for a project of this magnitude, critics say it’s remarkable that the city and the developers can’t get the little details of posting a notice correct. “This is the gang that couldn’t shoot straight,” former supervisor Aaron Peskin told me.

The other mystery: Who hired Gresham to review the notice? His letter makes no mention of any specific client, and none of the leading public foes of 8 Washington have retained him. He hadn’t returned my calls and emails by press time.

AH, BUT HERE’S THE UPDATE: Chuck Finnie, who works for the lobbying firm BMWL, just called to tell me that Gresham represents Equity Office Properties, which runs the Ferry Building. EOP, a major national real-estate development firm, is unhappy because the 8 Washington project will wipe out a parking lot used by patrons of the Ferry Building’s businesses. “When EOP took on the job of restoring that building, part of the deal was that parking would be available,” Finnie said. “The Port is ignoring that responsibility.”

Gee, this condo enclave gets more and more unpopular by the day.