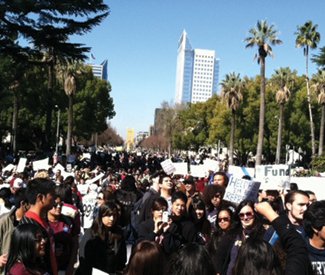 It’s an unseasonably hot day at UC Davis, and student activists are milling around a tent city, set up especially for 100 people arriving from a four-day March on Education. The school, one of the hubs of the Occupy movement, gained notoriety when public safety Officer John Pike casually pepper sprayed a line students during a sit-in back in November. Now, officers bike through the idyllic scene, smiling and chatting up occupiers.

Everyone is preparing for the next day, March 5, the statewide day to defend education that will bring thousands of students and teachers to Sacramento to demand an end to budget cuts and fee hikes at California’s schools, community colleges, and universities.

Those on the march hope to highlight the importance of this issue, marching 79 miles from the Bay Area. The first night, the march stayed in Richmond, and the next day Richmond’s Mayor Gayle McLaughlin came out to welcome them.

Students march annually on Sacramento, and say they won’t stop until education is affordable (or, as some would demand, free). A climate of worldwide protest over disparities in wealth and opportunity, including Occupy protests in the United States, helped fuel a larger than usual turnout this year.

More than 5,000 people converged in Sacramento March 5 and marched to the Capitol building, occupying the Rotunda all day. Many chanted “no cuts, no fees, education must be free.”

Community college student throughout the state are reeling from the cuts, and resulting fee hikes—course units, once free, were raised from $26 to $36 per unit last year, and will be increased another $10 this summer. These costs go towards closing the state budget deficit, and not toward a bigger course catalogue; classes continue to be slashed.

Frances Gotoh of San Bernardino Valley College is back at school after being laid off from her longtime job at Bank of America. She said she desperately needs the retraining; without it her job prospects look dim. She needs to support her family—her 20-year-old son is also a college student—but says she can’t afford the increasing fees. “Why is education being taken away?” asked Gotoh. “It belongs to the people.”

Josselyn Torres, a psychology major at Sonoma State University, felt similarly. “Every year, the fees are getting higher but the class size is getting bigger,” said Torres, who noted that many of her friends won’t be graduating with her because so many of the classes they needed were cut. “The politicians have all gone to college. If they keep cutting our education, how can we make it as far as them?”

When the march reached the Capitol, student and state government leaders spoke on the importance of education. Students demanded an end to fee hikes and budget cuts. Assembly Speaker John Perez (D-Los Angeles) and Senate President Pro Tem Darrell Steinberg (D-Sacramento) praised student activists and expounded on the necessity of accessibility to education. Almost all speakers decried the two-thirds majority needed to raise taxes, allowing just a few Republicans to block them.

Periodically, the crowd interrupted Newsom and other politicians in the midst of making promises with chants of “show us.” They also chanted this election year threat: “You’ll hear us out or we’ll vote you out!”

Around 12:30 p.m., the permitted rally ended and thousands dispersed. About 400 stayed to “Occupy the Capitol.” The group streamed into the building and into the rotunda. California Highway Patrol officers, responsible for policing the Capitol, blocked more than 150 from entering the central area. So, communicating via the Peoples Mic with several rounds of crowd repetition for every sentence spoken, the group participated in a statewide general assembly.

Some building employees showed support, but the only politician to sit down with the protesters was Newsom, who sits on the UC Board of Regents and CSU Board of Trustees. He chatted with students, some of whom requested that he ask police to stop blocking students from meeting in the same area; he didn’t do so, but was able to convince them to give protesters in the rotunda access to bathrooms.

The group managed to collectively decide on demands of the state: support the Millionaire’s Tax ballot initiative, repeal Prop. 13, cancel all student debt, fund all education through college, and democratize the Board of Regents. When building closed at 6 p.m., officers declared the assembly unlawful and arrested 70 who refused to disperse.

Meanwhile, another 400 or so attended a permitted rally on the Capitol lawn called by several Sacramento labor unions to support Occupy the Capitol.

Over the past five years, education funding in California has been cut drastically. Spending per K-12 student per year has gone down by almost $2,000 and higher education has seen program cuts and tuition hikes. Gov. Jerry Brown’s latest budget proposal includes still more cuts to California colleges and universities.

Several proposed ballot initiatives are designed to address this. An initiative sponsored by Brown would bring spending per student per year up by $1,000, stabilizing at $7,658 (it was $7,096 in 2011-12) and reversing a five-year slide. But it would still be less than 2007-08, according to a report from the California Budget Project (CBP).

That report shows K-12 education spending is the biggest piece of the state budget, although California ranks dismally low compared to other states for spending on K-12 education: 47th in the country.

The governor’s proposal would raise funds with a combination of a tax increase for those earning $250,000 and over per year and a sales tax increase. But critics say the increase in the sales tax, which is notoriously regressive, would hurt lower and middle income families.

The measure is up against other potential ballot initiatives that would raise revenue strictly from the wealthiest Californians. The so-called Millionaire’s Tax, for example, would raise funds for education by increasing taxes on those making $1 million or more per year. The Millionaire’s Tax also has the advantage of resulting in a permanent change in the law, while Brown’s measure would apply only for the next five years.

“California’s problems have also been exacerbated by tax cuts, one-time ‘solutions,’ overly optimistic assumptions, and the fact that the two-thirds vote requirement for the legislature to approve any tax measure has blocked adoption of a balanced approach towards bridging the budget gap,” according to the CBP report.

Teachers’ unions are divided over the best ballot measure. The California Teachers’ Association has endorsed Brown’s measure, emphasizing that it includes a plan to close the budget deficit.

“The governor’s initiative is the only initiative that provides additional revenues for our classrooms and closes the state budget deficit, and guarantees local communities will receive funds to pay for the realignment of local health and public safety services that the Legislature approved last year,” said Dean Vogel, CTA president, in a press release.

But the Millionaire’s Tax was sponsored by the California Federation of Teachers, and it has now been endorsed by this student general assembly. John Rizzo, president of the City College of San Francisco Board of Trustees, also endorsed the measure.

According to a recent report, of five polls conducted throughout California, each initiative has majority support, but voter prefer the Millionaire’s Tax, with a recent Field Poll showing 63 percent support.

Legislators are also at work trying to increase education funding. Assembly Speaker Perez has introduced a bill that would slash tuition fees by two-thirds at CSU and UC schools for students of families making less than $150,000 per year. The bill would also allocate funding to city colleges throughout the state, for them to determine how to best use the money.

The cost of the plan, about $1 billion, would be paid by eliminating a corporate tax loophole that the Legislature approved in 2009, which would allow companies to choose the cheaper of two formulas for calculating their taxes. Critics have called the legislation bad for business, saying that removing tax incentives would hurt California companies.

“The California Middle Class Scholarship Act is very simple,” Perez told students at UC Davis when he unveiled the bill on Feb. 3. “Too many families are getting squeezed out of higher education. For students whose families make $150,000 a year or less, too much to qualify for our current financial aid system, but not enough to be able to write a check for the cost of education, without feeling that pinch, the Middle Class Scholarship Act reduces fees at the UC system and at the CSU system by two-thirds, giving tremendous assistance to those families to make college affordable again.”

Education advocates say California needs to do something to reverse the spiraling cost of higher education in California, which could do long-term damage to the state, affecting young people and businesses that need skilled workers and spiraling out from there. And these advocates say this short-sighted strategy is easily preventable if there is the political will to address it.

“There are a lot of sources of revenue that are not being taken advantage of,” Lisa Schiff, a member of Parents for Public Schools of San Francisco, told us.

Even if tuitions were lowered or—as the most ambitious of protesters demand—higher education was made free, most former students would still be saddled with massive debt. As costs have risen, debts of hundreds of thousands of dollars are commonplace. With the job market recovery slow and painful, graduates often feel helpless to pay back their debt.

Robert Meister, a professor of Political and Social Thought at UC Santa Cruz and president of the Council of UC Faculty Associations, has long argued that the state’s higher education systems ought to focus on keeping tuitions low and student debt in check (see “In the red,” 1/11/11).

In his speech at UC Davis, Perez cast the issue as one of a disinvestment in the state’s future: “California’s public colleges and universities has been one of our most prestigious institutions, and, unfortunately, because of the collapse of the economy, we’ve moved away from fully investing in those universities and colleges.”

A month later, the school again served as a backdrop for illustrating the problem and calling for reform. Dani Galietti, a MFA student at UC Davis who was setting up a performance art piece when I arrived, greets everyone cheerfully and is thrilled about the Occupy movement.

“I wanted to share myself and my work with the movement,” Galietti tells me while taping a “paper trail” to the sidewalk; she plans to walk on it with home-made stamps attached to the bottoms of her shoes.

But her mood darkens when I ask about her student debt. “I came out of five years of education $100,000 in debt,” says Galietti, “and I’m not the only one.”

She is a first generation college student, she explains, who helped pay for school with McNair scholarships.

“I grew up one of five, with a single mother,” Galietti explains. “We struggled my whole life, as a lot of people have, financially.”

“So many people are graduating with so much debt. There’s this looming fear, fear and hopelessness. The economy’s bad, the job market sucks. I’m so thankful that they’re out here. People are active, they’re making a difference.”

“We need education,” Galietti says. “I mean, knowledge is power.”