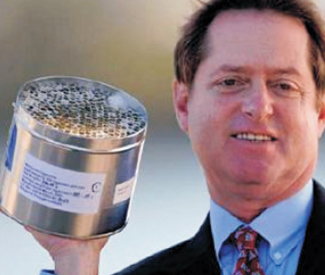 HERBWISE I contact a lot of stoners throughout the course of writing Herbwise — activists, businessmen, artists — but none has had a more crisp-sounding receptionist answer the phone than Ft. Lauderdale stockbroker Irvin Rosenfeld, who is one of four citizens of the United States legally allowed to smoke marijuana by the federal government.

No really, he is.

In 1982, Rosenfeld hit upon a winning combination of perseverance, legal precedent, and audacity when he succeeded in suing the US government to prescribe him cannabis for his painful, bone growth-causing condition. After filing a civil suit that claimed weed was the only palliative that helped his intense physical discomfort, Rosenfeld became part of the FDA’s short-lived Investigational New Drug Program. Calling Rosenfeld, original patient Robert Randall, and the subsequent 11 others who qualified for the program participants in a clinical study was the only way the feds could justify supplying the weed.

In 1992, the program was terminated. But the 13 patients — only four survive today — continued to receive tins of pre-rolled joints, the cannabis for which is grown (shoddily) at a government-run farm near the University of Mississippi. Rosenfeld tells me the weed he smokes is “12 years old,” and so dry that he’s compelled to unroll the cigarettes, store with fresh lettuce for six to eight hours to rehydrate the bud, then re-roll before smoking.

He tokes nine ounces a months and, he says, never gets high. He tells all his clients about his prescription because, as he puts it “I don’t want them seeing, for example, this article and thinking ‘oh, he lost us that money because he was high off that marriage-ja-wanna.'”

I ask him if he’s surprised, 20 years since he won his legal battle, that patients like himself are still battling for access to the plant. He reels off a series of crucial court hearings that, to his disbelief, swung time and time again in the direction of continued Schedule I status for cannabis. Rosenfeld says has made it able for him to leave the house on a regular basis.

“As a stockbroker I look at it economically. I think about, if I didn’t have my medicine, where would I be today? I’d be homebound. Is it just me? Or maybe there’s other people sitting at home that could be productive members of society. It irritates me.”

Our conversation is over, but there’s time left for two plugs from Rosenfeld. One for his book, My Medicine: How I Convinced My Government to Provide My Marijuana and Helped Launch a National Movement (www.mymedicinethebook.com). Buy it?

The second is for himself. Anyone need a stockbroker with experience in battling the US government?

“The expertise I used to take on the federal government is the same expertise I use in my business,” Rosenfeld assures me before we hang up. “If you want that expertise, you should hire me as your broker. If you don’t, then have a good life.”