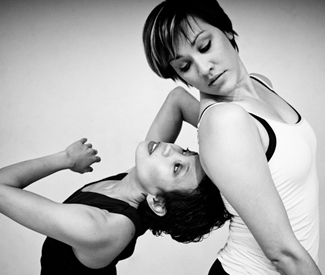 DANCE When choreographers Sue Li Jue and Nina Haft found that they shared a common interest in exploring the body’s memory — of personal experience, history, origins — they decided to make a work in which their individual choreographies would take turns on the stage. Thus the problematic this.placed was born.

In the past Li Jue has created beautifully designed dance theater pieces that explored her Chinese American heritage from a decidedly contemporary perspective. She did it poignantly, and often with a sense of humor. Haft’s interest in Jewish American history has led her to create theatrically pungent works about writers (Gertrude Stein) as well as gangsters (unnamed, though their stories are well known). Additionally, she has quite successfully examined the theatrical potential of specific locations, cemeteries and docks among them.

this.placed is an intriguing, perhaps even fun idea in terms of rethinking presentational formats. It certainly is something that theater artists, dancers, among them, increasingly examine. Yet I don’t think this one flew.

For one thing, the 75-minute evening consisted primarily of duets and trios. Though some of them were finely chiseled, more rhythmic variety was needed. Also lacking, I felt, was a sturdier thread that held the individual dances together beyond their place in the lineup. After all, the perspectives by these choreographers are different.

Why, for instance, would a sardonic duet about the wreckage life has inflicted on a woman’s face be followed by a trio about happy Chinese adoptees? Misfortune vs. happiness? Or an encounter between two men be preceded by a woman’s observations about her mother? Because both vignettes involved memory?

I would like to see this.placed again as two halves of the same program, with perhaps a rethinking of some the dances and some additional material. Conventional as that might be, it might strengthen the focus on the commonality and difference between the two choreographers.

Haft’s dynamic interpretations of Britta Austin’s gutsy prose certainly warrant additions. The mostly gestural language (for the mouth) of Bite Marks — performed by Jill Randall and Amanda Whitehead — infused a macabre sense of humor on the process of rotting while alive. In Trouble, the mysterious and ever so elegant dancing by Pailing Kao provided a foil to her sturdier “daughter” Sarah Keeney. Flesh, Taste, Fiction started on a note of voyeurism but quickly grew into an obsessively meaty mating à trois. Let You Go‘s desperate fierce struggle between Carol Kueffer and Lisa Bush left one of them “dead,” the other one just about.

Haft’s misjudgment was in entrusting one of Austin’s texts to a student group. Some of these performers may eventually become dancers. At this point, they belong in a studio setting.

Li Jue’s Half the Sky, a pastoral tribute to unwanted Chinese girls who have been adopted abroad, was cloying. It’s almost impossible for adult women to suggest the happiness and frolicking quality of childhood. If the choreography was supposed to recall some of the more naïve perspectives of Chinese folk dancing for women, it didn’t work.

The Lost and Found looked as murky as Ian Winter’s accompanying video. It featured a quartet of women arriving from different directions, coalescing into a pile of bodies and splitting into double duets. Linnea Snyderman was carried aloft, and Frances Sedayao rolled over everybody (side note: Sedayao danced in four of the nine selections — what a treat she was). More eminently legible was the nightmarishly dramatic and excellently danced duet Remember Me? for Masataka Aita and Nhan Ho. Aita at first seemed like a pesky intruder into Ho’s life. But he became the leech, or perhaps the incubus to the increasingly desperate Ho. At the end both seemed destroyed.

Not What She Seams started as a fine solo at last year’s WestWave Dance Festival. It now has expanded into an equally fine quintet which also sings. Huge bolts of fabric became the means by which these “seamstresses” expressed their anger and desperation, but also their resilience and hope.