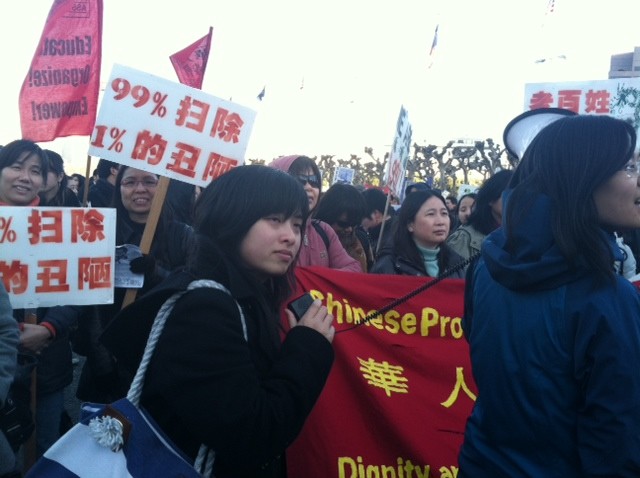 People across the Bay Area joined in the National Day of Action to Defend Public Education March 1, with rallies at Berkeley City Hall, UC Berkeley, Oakland City Hall, SF State, and at the State Building on Golden Gate Ave.  Demonstrators at UC Santa Cruz shut down the campus for the day demanding well-funded and quality public education.

At the State building, about 100 engaged in civil disobedience, entering the building’s large lobby for a teach-in on the importance of public education. Speakers included teachers and students from several local schools, including City College of San Francisco, San Francisco State University, and Mission High School.

Around 4 p.m, most left the building to go two blocks down the street to Civic Center Plaza, where about 400 converged to share stories of hardship in affording education and voice demands.

The day of action was supported and shaped in part by Occupy groups throughout the country, including, here in the city, Occupy SF, Occupy SF State and Occupy CCSF. But unlike most occupy-affiliated demonstrations, speakers March. 1 urged the crowd to support specific policies; initiatives that may go to the ballot in November.

Specifically, the group expressed support for the Millionaire’s Tax measure. If the measure passes, California residents earning $1 million per year would pay an additional three percent in income taxes; those making $2 million or make per year would add five percent. 60 percent of funds raised would go towards education.

There are several competing ballot initiatives to fund education, including one proposed by Governor Jerry Brown. According to a recent Field Poll, the Millionaire’s Tax polls the highest, with 63 percent support.

Some protesters also expressed support for the Tax Oil to Fund Education Initiative.

Support for both measures was one of the demands on a demand letter distributed throughout the events. Activists began the protest with lobbying at the offices of state legislators, and convinced four aides to fax the demand letter to their representatives, including Leland Yee, Mark Leno, Fiona Ma, and Tom Ammiano.

However, some protesters at the State Building teach-in emphasized that legislation would not solve the whole problem.

“This issue is bigger than just taxes. The same power structure that is causing the destruction of our educational system is also destroying the face of the planet that we live on. It’s destroying our personal relationships with one another and all of our brothers and sisters around the world,” said Ivy Anderson, a 2011 SF State graduate and organizer with the environmental group Deep Green Resistance.

The event was peaceful and lasted only a few hours. When the state building closed at 6 p.m., 14 remained inside, continuing to “occupy.” Police issued a dispersal order shortly after six o’ clock, and by 6:40, 13 had been cited on-site and released, according to SF occupier Joshua.

At that point, several raced to board buses down the block, joining about 100 others who began a march to Sacramento. Known as the “99 Mile March for Education,” protesters plan to walk about 20 miles a day until arriving in Sacramento March 5 to take their demands for accessible education to the governor.

According to Joshua, the conflict-free day was a success.

“We had a great rally, and I thought it was an excellent lead-up to Sacramento,” said Joshua.

“But the capitol is obviously going to be a bigger fish.”