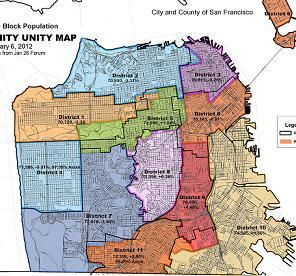 The Redistricting Task Force, which is drawing new lines for the Board of Supervisors, meets March 7 at City Hall, and supporters of the Community Unity Plan map will be presenting the proposal and making the case for a set of lines that dozens of community-based organizations have spent months putting together. The idea is to look not just at any one district but a the city as a whole — and to ensure that the downtown types, who would like to corral all the progressive voters into a handful of districts, don’t get their way.

The meeting’s at 6 pm in Room 406. If you want to check out the latest version of the Community Unity Map, it’s here. If you click on it, you can expand it and see where all the street boundaries are. The current districts are oulined in dark black lines; the proposed districts are in color.