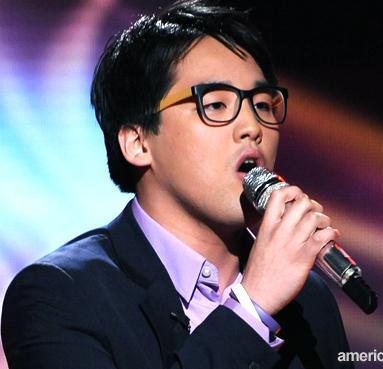 Our story so far:

The season has opened with a lot less weeping and drama than last year. The producers focused more on the winners than the losers, the `personal profiles weren’t so bad and other than Steven Tyler diving naked (TMI) into a hotel pool and telling St. Louis Cardinals pitcher Joe Magrane that his 15-year-old daughter Shannon was “hot, humid, and happening” (just like Boston in the summer), it’s all been relatively smooth.

Tyler looks half the time like he’s wearing his pajamas. J-Lo has been looking great, except for Feb 29, when the red lipstick was out of control and her shirt looked like a paper bag with some sort of rodent on the shoulder.

The background visuals are even worse this year than ever. With all the money going into this show, can’t they hire an artist who can do better than random flames, trees and pictures of the ocean?

And then there’s the singing. The last five winners have been guys — and the women have been, overall, the stronger contestants. This year it’s even more dramatic: Of the 12 women who sang in the first round, not one had a really bad performance, and some were outstanding. Of the 12 guys, only one or two were more than mediocre.

The star in the boy set: Heejun Han, who grew up in Korea and told the judges that he wanted to show how great Asian singers can be and who is already being called American Idol’s Jeremy Lin. He’s really funny, too:

Q: We haven’t had an Asian Idol, have we?

A: There are a couple. But they are all ugly. I am good looking.

Q: Do you have a problem walking down the street? Do women throw themselves at you?

A: I throw myself at them, actually.

Q: Is there a love connection with Fox 5 reporter Julie Chang? She offered to buy you dinner if you made it to the next round of the contest.

A: Julie Chang loves me. I think it should be like that for every girl. But it is just Julie Chang for now.

And he said it was every Asian man’s dream to hug J-Lo, which he got to do and it made him cry, which he’s very proud of.

And the guy can sing. He’s absolutely my favorite of the guys, although if a woman doesn’t win this year, my daugher will boycott Fox for life and I’ll start to wonder if the whole thing isn’t rigged.

J-lo and Steven really like Phil Phillips, who works in a pawn shop which makes me like him, too, except that he doesn’t really sing that well. Viv kind of likes Eben, who is 15 and looks like Justin Bieber, but I wasn’t impressed. Joshua really has the pipes, but he’s a little too gospel for my taste.

So Viv and me are sticking with Heejun.

On to the girls. A lot of tall blondes with the same kind of hairstyles. Three country singers. Lots of strong performers.

Chelsea’s one of the country girls, did a very predictable song, but did it well. Erica hit all the notes on “what about love,” even if she’s kind of breathy.  Jen did an Adele song and Viv (who loves Adele) says it’s the best cover she’s ever heard. Breall did “sitting on the dock of the bay” and rocked it. Skylar did Rod Stewart, which is really hard, and she nailed it, hilarious, great rocking country approach. Bailey had by far the hottest outfit of the night and sang well. Hollie has a dog named Shankly so I already love her, and she’s a torch-song type like Pia, who got robbed last time. Jessica sang with a sore throat and blew everyone away.

Haley’s the only one who had a weak night; Randy called her performance “a little train-wrecky,” which was, sadly, accurate.

Tonight we find out who makes the next cut.