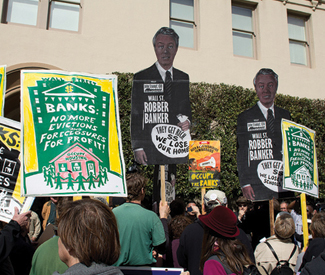 Wall Street’s massive taxpayer funded bailout, initiated by the Bush administration and carried forward under President Obama, never really ended — it just shifted from federal to local sources of funding. Even while local and state governments have been forced to cut back on crucial services, wealthy banks and investment firms are being padded with enormous cash flows sucked directly from the already strained budgets of cities, counties, and public agencies.

That’s the message a growing chorus of activists in the Bay Area are bringing before the boards, councils, and commissions that entered into complex financial deals with Wall Street banks, deals that turned toxic in the crash of 2008. Activists want elected officials and the banks to cancel the contracts and refund the public.

The Bay Area is the epicenter of this renewed movement for financial justice. Last week, teachers from Peralta College, organizers with the Alliance of Californians for Community Empowerment (ACCE), Oakland religious leaders, and Occupy Oakland activists organized four protests contesting what they say is bank predation on local communities.

At issue are arcane financial instruments called interest rate swaps. Sold by banks to virtually every sizable government and local agency in the US through the 2000s, rate swaps promised governments the ability to “swap” their potentially costly variable rate payments on bonds into a synthetic fixed rate. Seeking to protect local taxpayers during the volatile 2000s, when floating interest rates were rising, local leaders eagerly signed on.

But the economic meltdown turned those tools into golden handcuffs for local government agencies. Taxpayers are now forced to regularly pay millions to the banks simply because variable interest rates, at the urging of the Federal Reserve, have fallen far below the synthetic rates. These deals might seem numbingly complex, but the effects on local communities are clear and painful.

“The Metropolitan Transportation Commission is paying upwards of $53 million a year on rate swaps,” said Alia Phelps of ACCE at a protest on Feb. 21 outside of the former Bank of America building at 555 California Street. “This is money that isn’t going to keep routes in service, that isn’t paying drivers, nor going to repair buses, or to keep fares lower. We need these swaps renegotiated.”

That protest included visits to half a dozen banks. Activists demanded branch managers fax a letter to their corporate headquarters calling on the banks to voluntarily renegotiate swaps signed with the Metropolitan Transportation Commission (MTC), the Bay Area’s regional transportation authority, which has lost over $100 million on toxic swap deals.

“With this transaction, we are getting the peace of mind of a fixed debt payment at a significant discount from traditional price levels,” MTC’s Chief Financial Officer Brian Mayhew said at the time of the deal.

Basically the swap agreement had the MTC paying a fixed interest rate of 4.1 percent to the banks, while the banks paid 65 percent of the London Interbank Offered Rate (LIBOR), a key benchmark used in global financial markets. Whichever party’s sum happened to be higher when payments came due would pay the difference. The advantage of the deal, in the eyes of the MTC’s managers, was that it would lock-in a low interest rate on MTC’s debt, potentially saving as much as $45 million.

Fast forward to 2009. A year into the financial crisis, interest rates collapsed. LIBOR, which had been fluctuating around 5 percent and reached a peak of 5.8 percent in September of 2007, plummeted to virtually zero. The flow of payments became entirely one-sided, from MTC to banks that offered this deal. The advantage of the swap evaporated, and it became a toxic asset. While the Federal Treasury would offload similar toxic assets from the “too big to fail banks” using the TARP program, local governments were stuck with them.

As Ambac careened toward bankruptcy in 2010 due to its absurdly over-leveraged portfolio of credit default swaps, the MTC was forced to terminate its swap agreement with the company, paying the exorbitant sum of $104 million, after already having paid out $23 million in interest. All of this was essentially bridge toll money, surrendered by drivers crossing the seven state-owned bridges administered by BATA: the Bay, Antioch, Benicia-Martinez, Carquinez, Dumbarton, Richmond-San Rafael, and San Mateo bridges.

The drain on MTC funds indirectly affects all of its programs, including operational support for AC Transit, Muni, and other regional bus and train services. According to its most recent Comprehensive Annual Financial Report, MTC and its transit agency partners are on the hook for another $235 million in interest rate payments due on swaps with a rogue’s gallery of banks including Wells Fargo, Morgan Stanley, Citigroup, Bank of America, JP Morgan, Bank of New York, and Goldman Sachs. All of this money will be diverted from the MTC’s various transit infrastructure, planning, and operations accounts.

The MTC’s quarter-billion dollar rate swap nightmare is only the most obvious part of a more systemic problem. Until at least 2030, given current conditions, San Francisco’s Airport Commission must make costly rate swap payments to numerous banks, including JP Morgan Chase, Goldman Sachs, Depfa, Bank of America, and Merrill Lynch, on agreements associated with more than a half-billion in debt. Much of this is linked to commercial paper issued to pay for infrastructure at the Airport (SFO).

Unlike the MTC, SFO’s financial managers were more prudent in entering swap agreements, and therefore secured better terms that have produced a net savings. “The Airport has saved about $92 million to date,” Assistant Deputy Airport Director Kevin Kone told us, referring mostly to gains made between 2005 and late 2007.

But since 2008, SFO’s swaps have been losing money. When Lehman Brothers collapsed, and Bear Stearns imploded and was absorbed into JP Morgan, SFO was forced to terminate swaps with both companies, costing $6.7 million. Last year SFO paid $6.65 million to terminate a rate swap agreement with Ireland’s Depfa Bank. In September, the Airport paid another $4.6 million to end yet another rate swap with JP Morgan. These specific swap agreements, Kone says, “were functioning as they should have early on, providing savings,” but now they’re draining public funds.

SFO’s seven remaining swaps have a negative value of $67 million, according to San Francisco’s 2011 Comprehensive Annual Financial Report. As with the MTC, SFO’s debts will ultimately be paid by passengers and taxpayers. Kone says nobody really knows how much these swaps could ultimately impact the airport, either in terms of cost or savings.

“If interest rates rise, they could have a positive cost savings impact on the airport,” he said.

Joe Keffer of the Service Employees International Union (SEIU) Local 1021 said at the Feb. 21 rally that Oakland has already paid Goldman Sachs $26 million on a swap that dates back to 1997, and that under current market conditions, the city will have to pay roughly another $25 million until the contract expires in 2021.

Oakland’s toxic deal with Goldman Sachs is now the subject of much scrutiny. The newly formed Coalition for Economic and Social Justice —made up of churches, labor unions, neighborhood groups, and Occupy Oakland activists— took up the issue with the City Council on Feb. 21, packing the chamber with one of the more diverse activist coalitions in recent memory.

“We’re here to implore you to get the City of Oakland out of this toxic relationship,” Rev. Daniel Buford of the Allen Temple Baptist Church told the council.

Members of the Oakland City Council are sympathetic to this message. In a letter sent last June, Council member Rebecca Kaplan implored Goldman Sachs CEO Lloyd Blankfein to spare Oakland’s taxpayers: “By bringing the contract to conclusion with no penalty fees, and negotiating a reasonable exit strategy, you would be demonstrating good faith to public taxpayers in the most substantial way.” At the conclusion of public comment Tuesday night, Oakland Council member Libby Schaaf promised the public action on the swap.

In a Valentine’s Day protest the previous week, 50 activists visited the Oakland offices of Morgan Stanley. Faculty and students from the Peralta Community College system went there demanding the bank renegotiate a rate swap that is estimated to have cost the college $1.6 million last year. The same day the college’s board of trustees discussed the need to cut $12 million more from the budget in 2012. Morgan Stanley CEO James Goreman’s pay for 2011 was $14 million, opponents of the swap point out.

Peralta student and Bay Area transit activist Adam Ross attempted to reach the 9th floor offices of Morgan Stanley in a small delegation to deliver a letter demanding the bank renegotiate the swap: “There were signs on the door saying the office was closed. They probably got tipped off and locked the doors.”

A Morgan Stanley representative declined to comment for this report. Goldman Sachs did not return calls and emails. A spokesperson for the MTC was unable to be reached by deadline.