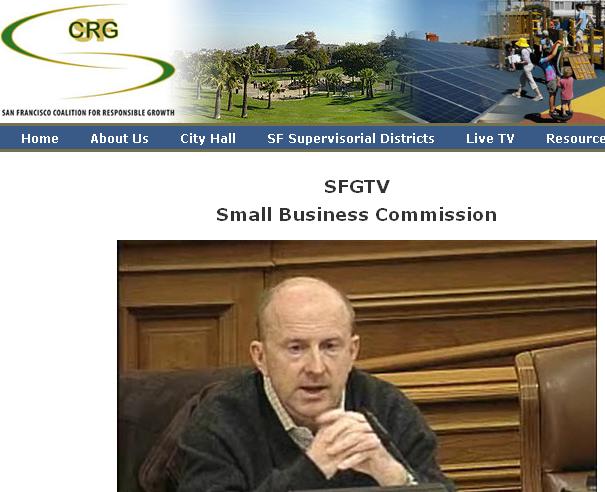 Is the Small Business Commission really advocating for small businesses, or has the commission been hijacked by bankers and real estate developers aggressively pushing a right-wing agenda of unchecked growth and cuts to government regulation, programs, and fees? And why has the Mayor’s Office stacked the commission with these ideologues and worked behind-the-scenes to keep them in leadership roles?

Those are just a couple of the questions that have been raised by Mayor Ed Lee’s recent effort to amend the charter to give this commission broad authority over the city’s legislative agenda, which was dropped in the face of widespread opposition, and by his office’s alleged calls to their appointees urging them to vote for developer Luke O’Brien as vice president and banker Stephen Adams as president (simply reversing the roles they had played last year).

Traditionally, sources say the commission has sought to balance leadership between the mayor’s four appointees and the three appointed by the Board of Supervisors. But these days, the Mayor’s Office (mostly Chief of Staff Steve Kawa, we’re told) and its appointees (which include two bankers and one developer), at the urging of pro-development groups Coalition for Responsible Growth (CRG) and Plan C, seems to want to consolidate their control and push their agenda.

“If the Mayor’s Office feels the need to interfere in commission votes, it interferes with internal commission matters and the spirit of the commission,” Board President David Chiu, who has been following the Small Business Commission dynamics, told the Guardian.

Outgoing commission member Janet Clyde, who runs the legendary Vesuvio bar in North Beach, said she has long been bothered by the changing tone and dynamics on the commission: “There is definitely an agenda that is driven by the Mayor’s Office, a more conservative view…There is a big business agenda in small business clothes.”

And she said that change has been pushed by Plan C, CRG, and other fiscally conservative groups that backed Lee’s mayoral campaign. “They really saw an opportunity to use the Small Business Commission to push their agendas.”

The CRG board includes three members of Murphy O’Brien Real Estate Investments, including O’Brien and Mel Murphy, who is a mayoral appointee to the Building Inspection Commission, where he also regularly advocates for real estate interests. CRG, which did not return our calls for comment, testifies regularly at City Hall in favor of development and against regulation. Clyde and current commission member Kathleen Dooley say O’Brien has been especially aggressive in pushing his ideological agenda.

O’Brien ignored repeated Guardian requests for comment, and when we finally reached him by phone, he said, “I have no interest in talking to you.”

In December, in his role as president, O’Brien called a special hearing to discuss the Eastern Neighborhoods Plan, the massive land use plan passed a few years ago after dozens of public hearings to work out its myriad complicated details and balance the preservation of light industrial properties with housing development, providing city services, and other considerations.

“This thing really needs to be thought out a little bit more,” O’Brien said at the hearing in a video clip that is prominently displayed on the CRG website.

Commission Executive Director Regina Dick-Endrizzi defended that hearing and others that have ventured into planning, regulation, and land uses issues that seem to be the purview of other city commissions. “Every business we talk to that wants to be in a brick-and-mortar space, it’s all about land use,” she said, noting that at the commission’s last annual retreat, “they decided to take a look at impact fees and their implications.”

She also noted that the city defines small businesses as having fewer than 100 employees, and that both developers and bankers are legitimate small business advocates, noting how important loans and other capital sources are to small business survival. Mayoral spokesperson Christine Falvey also defended the appointments and their focus: “The Commission has a diverse group of individuals to represent small business. The agenda is not controlled by any one group. There is a diverse group of voices and all deserve to be heard.”

Falvey also said it’s important to have bankers like Adams, a branch manager of Sterling Bank & Trust, on the commission: “The Mayor understands the important link between conventional banks and micro lenders. While there are moderate improvements in the lending environment, understanding the current status of access to capital is critical information for the Commission in its role to advise and make recommendations to the Mayor and Board of Supervisors on policy matters and City regulations that affect either the ease or difficulty in doing business in San Francisco.”

But progressive members of the Board of Supervisors – including Sup. Christina Olague, a mayoral appointee, in her recent interview with the Guardian – have regularly derided the narrow focus and ideological agenda of the commission, particularly its mayoral appointees. Some privately call it the “Small-Minded Business Commission.”

“We need some diversity on this commission. It can’t be all white men with a particular point of view,” Dooley said.

That could begin to happen on Tuesday when the Board of Supervisors is slated to replace two of its outgoing appointees, Michael O’Connor and Janet Clyde, with two that have been recommended by the Rules Committee: Monette White, who runs Food for Soul, “an upscale restaurant and holding company,” and William Ortiz-Cartagena, CEO of Gentle Parking, which managing parking lots in the city.

But that won’t go very far in changing a commission that seems focused on using the “small business” fig leaf to push a more broad and ideological pro-business agenda. Even Chiu, who is strongly pro-business, told us, “The Small Business Commission needs to be focused on the plight and issues of small businesses.”