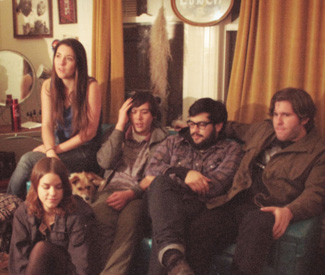 MUSIC How does one trace the warp and woof of Bay Area indie rock’s silky, sick, multihued tapestry — with ticket stubs to long-ago shows, holey concert T’s, or grainy snapshots of sweat-swathed guitar players, red eyes gleaming in a haze of smoke machine emissions? Perhaps one way is to chart SF indie’s course from the first Noise Pop to the latest 20th anniversary edition, teasing out the tenuous connections between the first fest’s headliner Overwhelming Colorfast, reunited this year, and newish local poobah Young Prisms.

The pinging, ringing unifier might be found in the cascades of distortion, the buzzsaw guitars, used to drastically different ends. Fighting it out, too, beneath Overwhelming Colorfast’s fleet-footed crunch and Young Prisms’ smoggy overhang of echo-chamber shoegaze are clearly discernible, sensitive hearts, pulsing through the dulcet vocal lines and delivered with perfectly imperfect, threadbare falsettos. You can hear the ties that bind the two bands in the tide of romanticism and even sentimentality running under OC’s onslaught, YP’s haze.

Back in their 1991 to ’96 day, I confess I lost track of Overwhelming Colorfast: I don’t think I even saw them during their brief lifetime, although the music-snob friends respectfully granted that OC were kind of OK. So it feels thoroughly weird to play catch up with the most praised recording, Moonlight and Castanets (Headhunter/Cargo, 1996), by Antioch’s finest. Just as Overwhelming Colorfast was breaking up (only to reassemble, in time, as Oranger), Moonlight came along. Sprawling and ambitious with a bit of everything, it evokes the exploding mind of a particularly imaginative punk/rock fan, stuck in the suburbs and succored on chicken-fried ’70s and ’80s FM rock and moshpit-ready Amerindie hardcore bands that could be your life.

Of course, much like Young Prisms, accusations of derivativeness dogged Overwhelming Colorfast, whose inspiration and albatross was Hüsker Dü. Founding vocalist-guitarist Bob Reed couldn’t help it — he had clearly ingested far too much SST, with a very special emphasis on 1984’s Zen Arcade and Double Nickels on a Dime and 1985’s I Don’t Want to Grow Up. But listening to Moonlight now —particularly its forward-thrust first side — those snap dismissals and facile comparisons seem unfair.

The side starts “Starcrunch” with its heavy-outta-the-gate guitars that match Bob Mould and J. Mascis lick for lick, moves through “Mickey’s Lament,” which goes Weezer one better with its smart-kid, enjambed vocal delivery, rhythm guitar chug, and Stooges-y impaired piano drone, and closes the tender, breathy “Last Song” with a back-and-forth guitar line that captures the indecision as Reed sings, “Got a stupid note here / It’s from me to you. It’s all I could do / Thought I might just toss it / But it took so long. Tell me if it’s wrong.” Eventually a way-too-exuberant fusillade of guitars busts in, attempting to obliterate uncertainty: it’s as if Reed peered into the overwhelming darkness— wondering whether he should hold this awkward note and whether Colorfast could last—then decided, “Fuck it.”

The precarious, ground-shifting nature of SF indie — so often fielding copy-cat accusations, so far from the so-called music industry centers — also touches Young Prisms, also reared in SF’s bedroom communities yet looking to influences further afield, across the Atlantic, in the form of My Bloody Valentine and the Jesus and Mary Chain. Like Colorfast, the outfit has also coped with its share of membership switcheroos: the title of debut Friends For Now might have foretold the departure of guitarist Jason Hendardy and the arrival of vocalist-guitarist Ashley Thomas, whose vocals along with vocalist-keyboardist Stephanie Hodapp’s, pushes Prisms further toward the vaguely feminized, sonically diffuse space of the Cocteau Twins.

Songs like “Gone,” off YP’s upcoming second LP, In Between (Kanine), hinge on nursery rhyme-like vocal lines and a fluid wall of rhythm guitars against which a singular New Order-like guitar line dances. Guitars are used as pretty, pointillistic devices, seamlessly incorporated with washes of synth. People come and go, but here, sonic elements coexist in a more generalized, less personalized harmony, where lyrics are obscured and vocals are used as effects, rejecting the jolts — and listen-to-me force — of Reed’s more intimate, ungainly urgency. Do the Prisms reflect a kind of indie progressiveness — an evolution from the punky and individualistic to the ambient and collective? For answers, revisit In Between in 15 years.