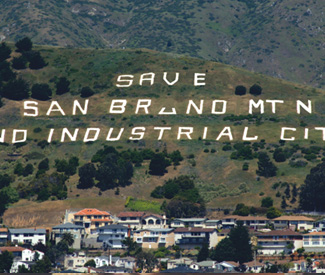 FILM Bay Area filmmakers Steve and Ann Dunsky (2005’s The Greatest Good) have a pair of documentaries making waves right now: Green Fire, about conservationist Aldo Leopold, which plays at the upcoming San Francisco Green Film Festival; and Butterflies and Bulldozers, an exploration of the decades-long fight to save San Bruno Mountain. Bulldozers screened at the 2011 Green Film Festival, and has a coveted slot amid the 20th anniversary programming at Washington, D.C.’s Environmental Film Festival later this spring. (It also features Guardian editor and publisher Bruce B. Brugmann among its interviewees.) I chatted with the busy couple about their latest projects.

SFBG I have to admit, I hadn’t even heard of Aldo Leopold until I saw Butterflies and Bulldozers, which opens with a Leopold quote.

Ann Dunsky I think maybe 99.9 percent of all the people we’ve ever spoken to have never heard of Aldo Leopold. But for those people who do know of him, he’s like their god. He’s had an amazing influence on the field of conservation.

SFBG How did you get involved with the San Bruno Mountain story?

Steve Dunsky We had just made The Greatest Good, and it was a really intensive period of time. So [we] decided to take some time off from our regular jobs, with the U.S. Forest Service making films, and maybe do an independent film. At that time we’d been living in Brisbane for about 20 years, and we’d heard about this amazing story that had national implications, both historically and in a contemporary sense. And since that’s what we do — we make films about conservation and conservation history — we thought we’d look into it.

SFBG What was the biggest challenge you faced?

AD What intrigued us was the heart of the story, which is what you’re always looking for: the wonderful relationship and dynamic between [film subjects] Fred [Smith] and David [Schooley], these two really good friends who bonded over their joint efforts to save the mountain, and ultimately had a major falling-out about the best way to do that. So we thought, “There’s the thread that we would like to weave throughout he film.”

SD The reason we chose that Leopold quote at the beginning is that we ultimately realized that it’s a story about compromise. It’s an uncomfortable subject for a lot of people, especially in the environmental community, because it does create a lot of tension over where you draw the line. At what point do you say it’s OK to have some development in exchange for other protections?

AD It was a challenge to find that proper balance where we were very respectful to all sides. Telling the story completely without any narration is a very hard way to make a film, but ultimately I think it’s much more satisfying, because our voices aren’t in there trying to tell the viewer what to think.

SFBG The film discusses how San Bruno Mountain was, in some ways, ground zero for the environmental movement.

SD The early 60s were a formative time for the environmental movement, and San Bruno Mountain and Save the Bay played a critical role in that. And then, you have this whole second layer of the story, which deals with the Endangered Species Act and the Habitat Conservation Plan amendment, which is also very historically significant.

SD It’s really a success story, despite the compromises that were made. As we say in the film, it is one of the largest open spaces in any urban area in the United States. Most of the mountain, 2,000 acres, is state and county park. And that was the result of these protests, as well as the political and legal processes that went on in the 1970s behind the scenes. [Currently] a developer wants to build on some sand dunes that are on the west side of the mountain, so that’s a fight going on right now.

SFBG Do you hope the movie will inspire people to take up the fight?

SD For people in the Bay Area, what I would like them to do is — when they drive by San Bruno Mountain, they don’t look at it as a big, ugly, brown lump, but actually realize that it’s a haven for biodiversity, and also that there was this 50-year ongoing struggle to save it. I think it’s important for people to know the history of their surroundings.

From a national perspective, we really hope that it gets people to think about these deeper issues of conservation, questions about compromise, and questions about development versus preservation.

AD One of my favorite Leopold quotes is “Conservation without a keen realization of its vital conflicts fails to rate as authentic human drama; it falls to the level of a mere utopian dream.” I love that because I think it’s so easy to say “No development anywhere!” A lot of us would like things to be that easy, but they’re not. And I think this film, hopefully, will help people recognize that it’s not that simplistic.

Green Fire screens March 5 at the Green Film Festival (www.sfgreenfilmfest.org) and March 8 at the Randall Museum (www.sfns.org). For more information on Butterflies and Bulldozers, visit www.butterfliesandbulldozers.com; DVDs available for institutional and home use at www.bullfrogfilms.com.