Home Valentine's Day dump the banks rally: If only all break-ups involved this... 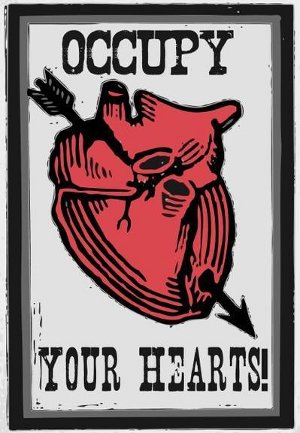 Protesters across the country participated in “break up with your bank” day on Feb. 14. Several protesters happened throughout the Bay Area, including a demonstration organized by Causa Justa :: Just Cause, Occupy Bernal, Occupy SF Housing, and the San Francisco Tenants Union.

In past months those organizations have variously stopped evictions and foreclosures, prevented homes from being auctioned off, and organized mass protests. They’ve created trouble shutting down bank branches, sometimes for hours, on dozens of occasions.

For Valentine’s Day, protesters decided to have a little fun.

“Our intention is not to shut down the banks,” insisted Causa Justa organizer Maria Zamudio. “Just to break up with them.”

Security guards at the banks that the group approached locked their doors. Protesters, amused, began chanting “the banks shut themselves down.”

Bank of America building locked their doors when they saw the protest approaching. At the Wells Fargo west coast headquarters around the corner, a representative who identified himself as David accepted the card.

Afterwards, a dozen members of the group headed to City Hall for a Board of Supervisors meeting in support of a resolution brought by Supervisor John Avalos and co-sponsored by Supervisor Eric Mar. The resolution supports the city treasurer’s office in its recent efforts to include social responsibility and community reinvestment in its evaluation criteria as it searches for new banks in which to invest San Francisco’s money. The resolution passed.

“It’s not a victory, but a great step in the right direction,” said Zamudio. She hopes that the social responsibility assessment will look at a bank’s history with predatory loans, investment in small businesses, and refinancing mortgages.