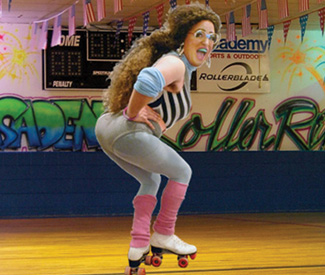 SUPER EGO They call her cinnamon shot/ because she’s quick and hot/ and when she’s really on?/ She’s a sake booomb! I recently affirmed — tipsier than the Costa Concordia and twice as cruisy — that one of my all-time favorite bars is that Sapphic Mission watering hole, the Lexington Club (3464 19th St., SF. www.lexingtonclub.com), wherein ace bartender Amy and a gaggle of scrappy lesbians got me good and watered on the cheap.

The Lex is a classic. But let’s stumble through some of the new joints in town that have just thrown open their bar doors. Social Study (1795 Geary, SF. 415-292-7417) in the Fillmore is a chill, evening nook where you’ll meet your dream sexy librarian. It’s beer and wine only: buy her a couple glasses so she’ll let down her hair and flip it around the brick-walled space like a Van Halen video. In Bernal Heights, Iron and Gold (3187 Mission, SF. 415-824-1447) took over the old Argus space — it’s all spruced up pleasantly, with one of those trendy Olde Tyme Californy wood stoves in the back, but has yet to find its flavor in the crowd and cocktail department, IMO.

Dear Mom (2700 16th St., SF. 415-625-3362), meanwhile, is blowing up faster than your Facebook wall did with shocking Whitney tributes from your punk pals. (They can care!) I had to slyly elbow my way through a pack of future indie rock cautionary tales to the bar, whose major architectural innovation is an extra corner for hanging onto. There I was rewarded with a PBR, so retro, and rad people-watching. You straight singles are kooky adorbs. Skip the weakish cocktails — surprising from the folks who brought us Whiskey Thieves, Thieves Tavern, and Dirty Thieves — and the, er, “revealing” ladies room (no doors), but watch Mom transform her old El Rincon space into a neighborhood magnet.

I didn’t make it to fresh-out-the-box Rock Bar (80 29th St., SF.), from the Front Porch folks, because my heel broke — um, can we finally move beyond late-night food trucks to outfit-repair kiosks and touch-up huts? — but don’t fear the musty-ish moniker: it’s a neat play on the stone-encrusted exterior, inherited from its days as the International Club. I’ll get there, though, once my shoe-glue dries.

The “upscale” club in Union Square has actually been very good to scruffy underground fans with its affordable weekly Thursday night techno blast, Base. (Who else could afford to fly in so many European DJs?) Now, in honor of its fifth anniversary, the club has planned a week of monster names, Wed/15-Sun/19, including Moby, A-Trak, Digitalism, and Hercules and Love Affair. Check out the details at www.vesselsf.com and go big in an intimate space.

One of our local heroes of energetic techno — think storied 1990s weekly Sugar at the Stud — is finally back on the decks to throw down at the kicky monthly Dial Up party. Her muscular style (right down to her tank top) marries deep yet fleet-footed grooves with progressive house’s more rewarding trappings. Nice to see ya!

For six years the monthly Lights Down Low party has brought new intriguing sounds and old favorites to SF — this Brit legend (whose work as Maas is revered by techno heads and who’s been palling around with Andy Weatherall lately) brings some deep tech-funk and bleepiness, joining New Jersey house god Todd Edwards and many more for some in-the-dark madness.

Opening for sophisticated Italian-Belgian pop-house act Aeroplane on Friday is our very own Poolside, the sun-kissed duo comprised of Filip Nikolic and Jeffrey Paradise, who’ve been slaying daytime parties around the world with dreamy acid house reveries and melodies that catch you in the bikini. A bit of lovely warmth in winter, this.

Intoxicating Mexican techno from this wavy-haired goofball, please, especially when hybridized with avant-pop structures into a bouncy funk, with one smart eye on retro-minimalism and the other on bumping rumps. Tim Sweeney, host of NYC’s invaluable Beats in Space radio show opens up.

“Nobody parties like the Brazilians!” is the motto of the Friends of Brazil, who are throwing their 45th outrageous Carnaval celebration on Saturday. I and my sore bottom are here to affirm that this is true! Mardi Gras is hard upon us, and it’s Rio’s traditional time to shine (even though our own big Carnaval street party doesn’t happen until May). Let those feathers fly and sequins shine with great live music and dancers.

This adorably meshuggah yet politically sharp (her satirical stage extravaganzas are to die for) drag queen threw one of the parties of 2010 when her birthday Bar Mitzvah rolled around. The long-awaited follow up, on wheels, promises just as many bumps, thumps, and bewigged triumphs.