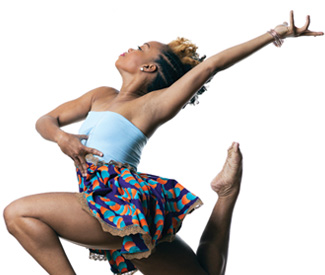 DANCE On the opening night of its eighth year, the three-weekend “Black Choreographers Festival: Here and Now” deserved its name. The quality of the choreography and the confident performances more than confirmed that BCF is a celebration of excellent contemporary African American choreography. Four out of the five works starred as fine world premieres by local artists. They were stylistically about as diverse as you would want, but this was an evening to rejoice. The Feb. 10 audience at Oakland’s Laney College more than agreed.

Reginald Ray-Savage’s Savage Jazz Dance Company looked better than it has in a long time. For Friday, February 10 he reached for an idiosyncratic collage of scores. Except for the finale, there seemed to be little jazz; still, the selections made sense, starting with a passage of pizzicato violins that played as Lavante Cervantes ceremoniously walked across the stage. But almost immediately, that calm exploded into intense, relentlessly shifting encounters among six dancers.

Though tightly choreographed individually, the passages followed each other without internal logic. Transitions were sublimated into the commitment and clarity of individual moments — fierce turns, huge extensions, and traveling leaps. Every phrase had to stand on its own.

One of Ray-Savage’s gifts is setting in relief individual talents: Melissa Schumann’s tearing into space, Jarrod Mayo’s floating elevations and whiplash turns. Two duets showcased the magisterial Alison Hurley. With Evan Kharazzi, Hurley assertively reversed dance’s traditional male-female relationships; her dramatic-lyrical encounter with Mayo brought out a quasi-maternal quality. Friday‘s only misstep was to bring on Suman Wilson at the very end. Why, if at all, only then?

With a largely changed cast and on a different stage, Robert Moses’ 2008 Approaching Thought looked like new. The current crop of dancers performed the whirlwind choreography clearly and assertively. To see Katherine Wells and Crystaldawn Bell — both of them reed-thin, long-limbed and fierce — next to each other was breathtaking. I still don’t know what the title means, but Moses must have had something in mind along the lines of contrarian relationships, since he built the work around duets.

Approaching is packed with movement ideas — unisons that splinter, duets that evaporate; a hip-hop gesture here, a ballet turn there. People send each other packing, and they embrace. Norma Fong was a one-woman threat to anything in her way; no wonder she sent a cowering Wells into the wings.

Susana Arenas Pedroso’s new version of Yemaya, Ocean Mother, with live music, including her as the lead singer, evoked the give and take of the ocean with mesmerizing intensity. Supported by seven fellow dancers, Regina Tolbert’s Yemaya rolled her shoulders and swayed her skirts, gathering and releasing energy. Playful one moment and ferocious the next, she kept joining a larger whole but also metamorphosed out of it.

Kendra Kimbrough Barnes showed an excerpt of In the meantime. Performed by six women, of divergent physical make-ups and approaches to dance, the work appeared to be the next step in what Barnes has explored in earlier pieces: the internal and external life of African American woman, and by extension other wives, mothers, matriarchs, and burden-carriers. She has a special ability to combine text that speaks softly about momentous issues and pair it with choreography that expands on the language. The complete work will premiere this fall.

The enthusiastically received Ndozi: Ancient Truths Revealed paired Congolese drummer Kazi Malonga and longtime Dimensions Dancer Theater performer Latanya d. Tigner in a coming-of-age story. The overly long opening, with blackouts and too-somber lighting, was awkward as it introduced us to either a dream or the resurrection of a young girl who has to find herself. But to watch Tigner, guided by Malonga, being initiated into the all-male drum ensemble was seeing transformation in action. Tigner was magnificent as she first found her feet and then her rhythm.

For the next two weekends, BCF will be at Dance Mission Theater with new programs, including special performances of Marc Bamuthi Joseph’s Word Becomes Flesh.